It's taken almost a month but now it is finished. The summerhouse has gone and replacing it we now have a small patio and arbour. It was on Monday 26 May that I started, with Diana taking photographs. The fate of the summerhouse had been sealed last October, when one night (not during one of the big storms in that month) the wind took off a sheet of roofing felt.

That event revealed that the roof panels were not as solid as had been thought. We knew when we moved in that the bottom of the shed, which was laid directly on the peat soil, was rotting away. But October revealed that there was no point in planning any work to fix the floor. 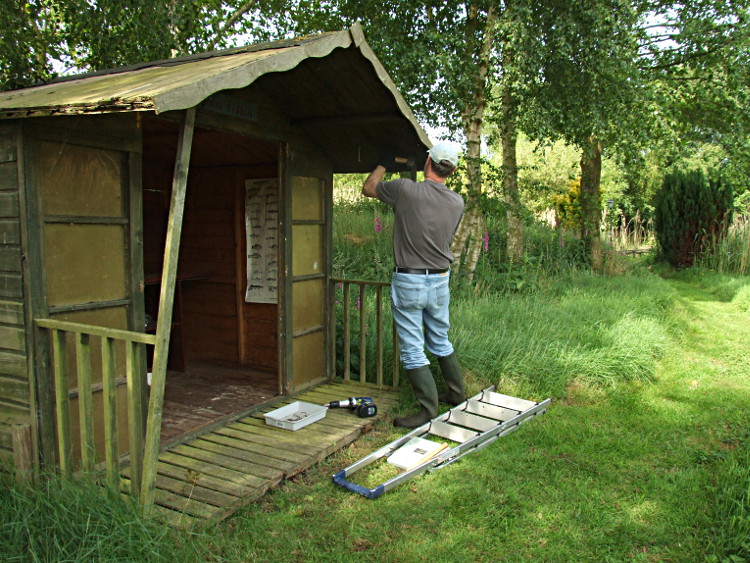 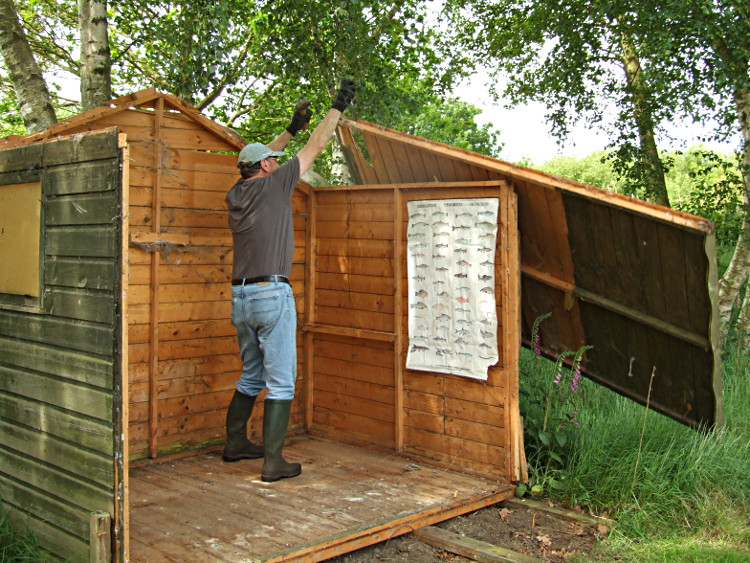 For a few days the panels remained stacked close to the site of the summerhouse. The next job was to cut all the panels into at least two pieces so I could put them on a wheelbarrow and move them to the side of the house where they are to stay until I developed a plan to dispose of them. That is still to happen! With that stage complete, as reported on my View From the Goose House entry on Friday 30 May, we were left with a view of the house that we don't expect to see next year, an unimpeded view with foxgloves in the foreground.

Then there was a fortnight or so spent laying a patio. We didn't want the replacement rotting in the same way as the summerhouse. That took a while as initially I wasn't sure about the wisdom of laying the slabs on peat. It felt more like laying them on a mattress than on "solid" ground. I wanted to see how they settled before rushing at the job. The plan also involved a sloping set of slabs to hold back the embankment behind from trickling down on to the main surface. In the end, it seems to have turned out a lot more solid that I expected.

On the 14 June I began to assemble the new arbour itself. It had to be done on site as it would be too heavy to lift when assembled. That posed a problem as my cheap rechargeable drills failed. 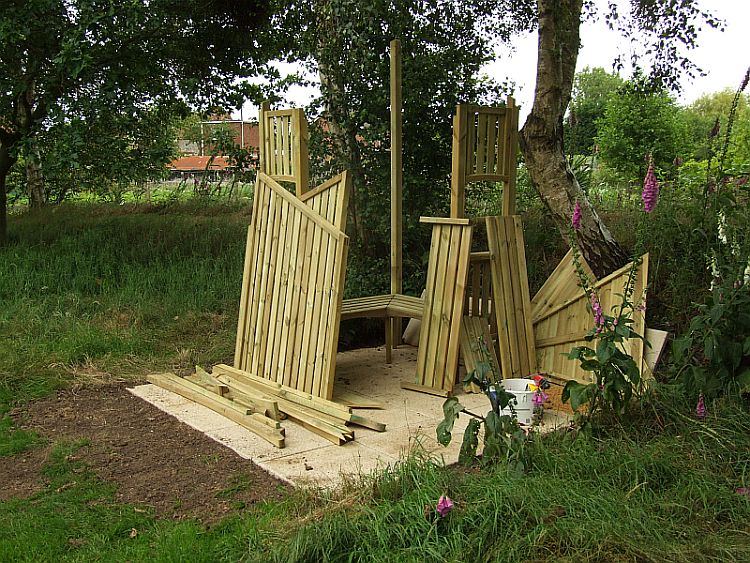 After the weekend I was ready to continue. I didn't get much further that time as, once again, my drill gave up after tackling a number of tough holes and very tight screws. It did make me wonder if the instructions were telling me to use the right drill. 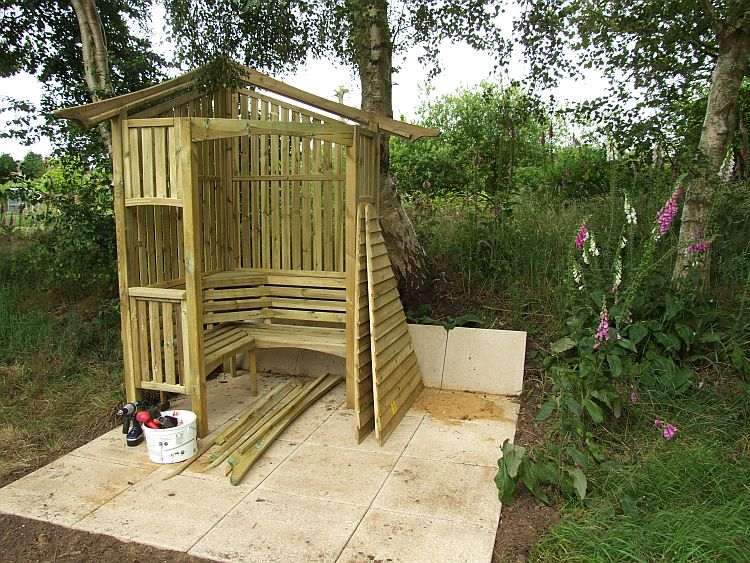 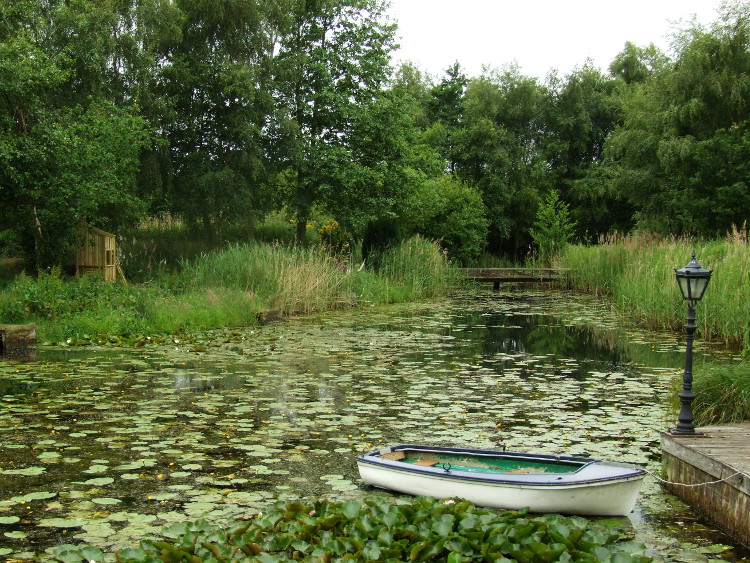 However, by now, there was a fair indication of what it would look like from the house when finished. You can also see how the lilies seem to be taking over completely on the lake!

One more crack at it and the job was done - except that I have left a small pile of sand on the patio to brush into the cracks should too much disappear after any rain. 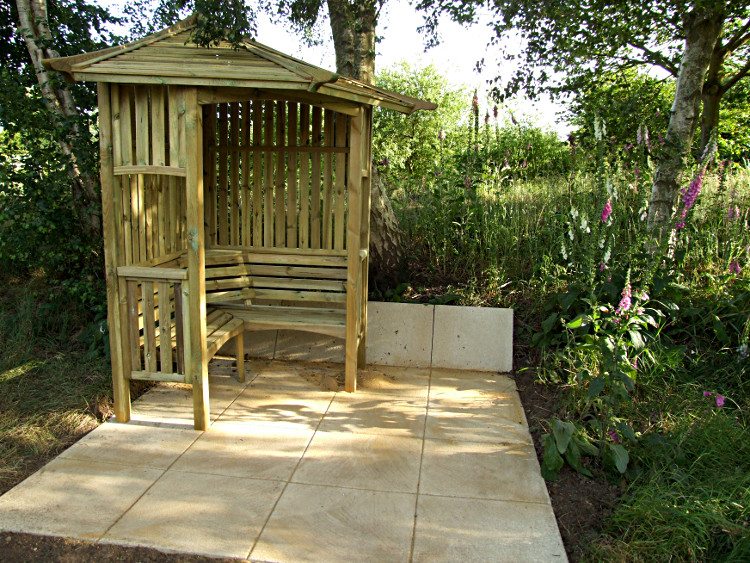 Unlike the summerhouse, the arbour has been deliberately sited to face away from the house and cottages. That has the disadvantage that the "back" of the arbour is presented to the house and from there you don't see the sloping roof that was almost certainly the view that was in the designer's mind when it was created. However, we hope that it will encourage us to look more closely at the bank of flowers and lake when we use it and the plan is to disguise the less than ideal view of it from the house with some trellis panels beside which we shall plant some flowering climbers of some kind. 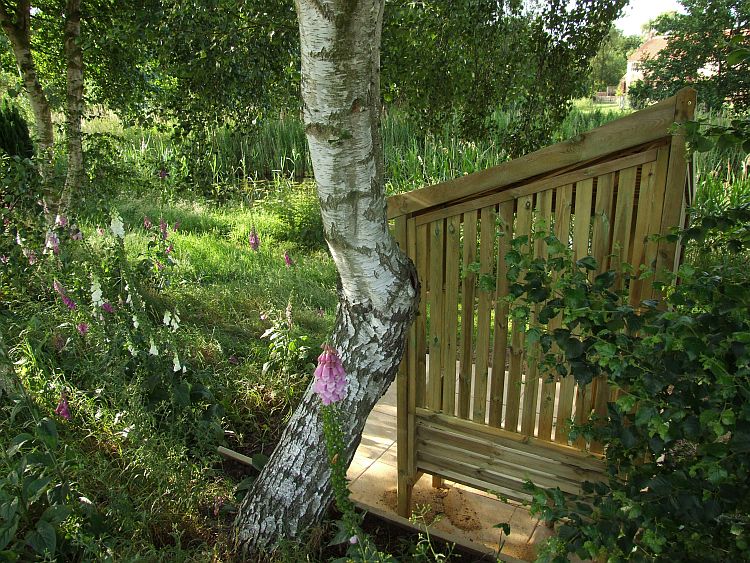 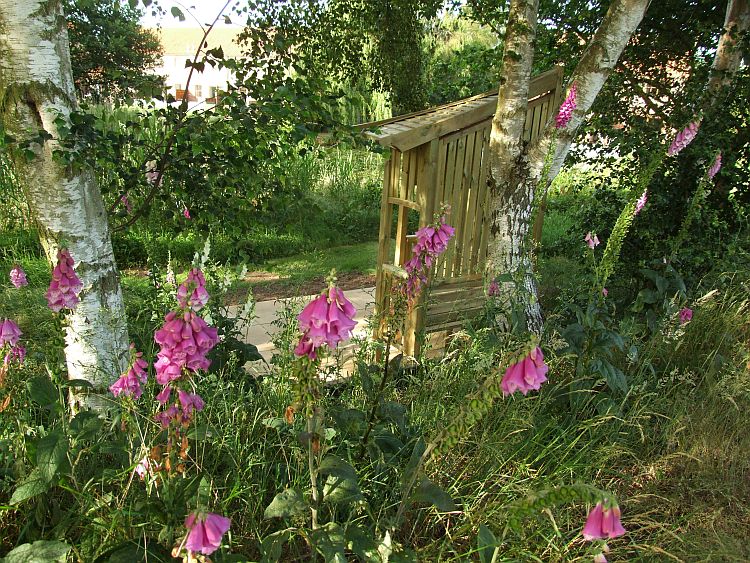 While we don't expect to use it every day, we do expect it to last a good long while and that some of our visitors will choose to sit away from the house and take in the splendours of the grounds at Ruston House, while sipping their gin and tonic or red wine!