As mentioned earlier this month, we now have The Green Team helping us with the grounds around the house. Work has been concentrated on the island and this is the view that you get standing on the bank of the lake behind the cottage nearest Ruston House. 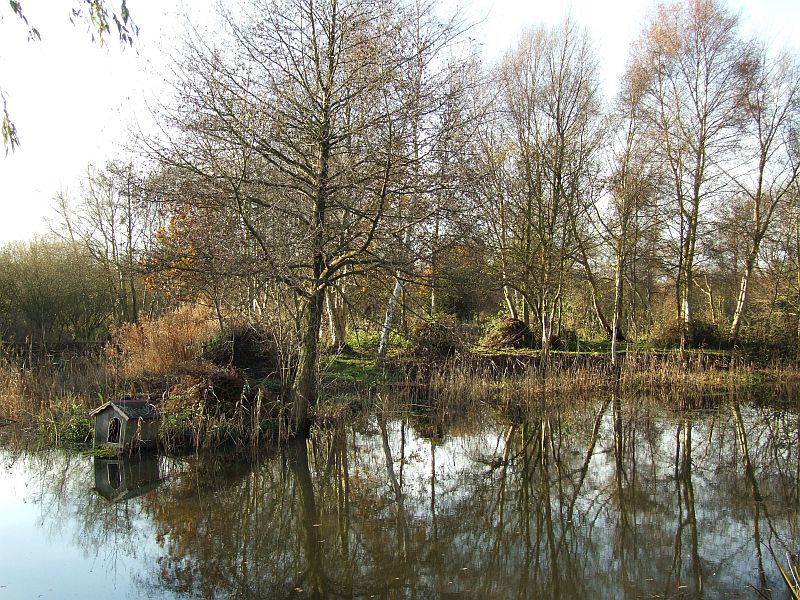 So far, work has been concentrated on the side of the island facing the cottages, so if you go to get a closer look then not much seems to have changed as you first cross the bridge to the island. There's still plenty of reed about... 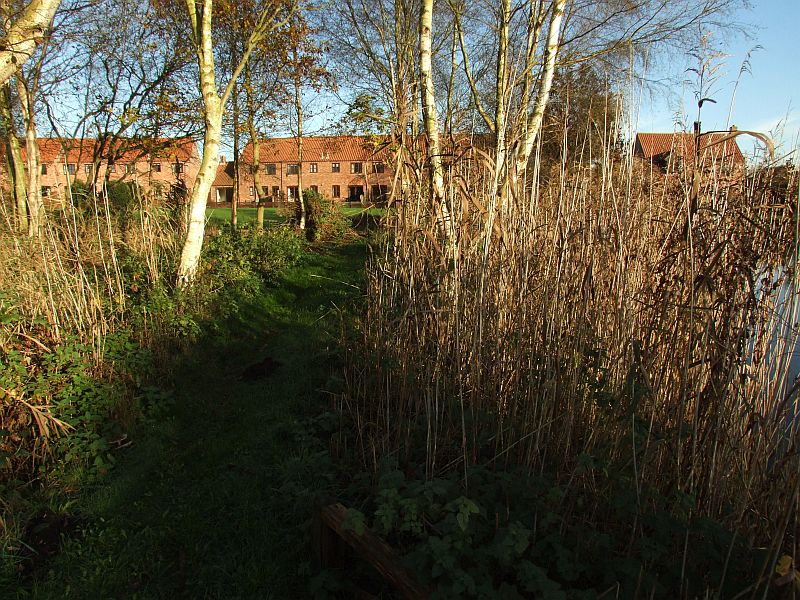 But you only have to go a few steps further and you find the ground cleared and huge piles of vegetation. Over the last three weeks Andi and Bex have felled a number of trees and, as best as possible, cleared the brambles and nettles from the end of the island nearest the house. On top of that I have spent a little time clearing reed and other vegetation that looked likely to fall over and rot in the lake. 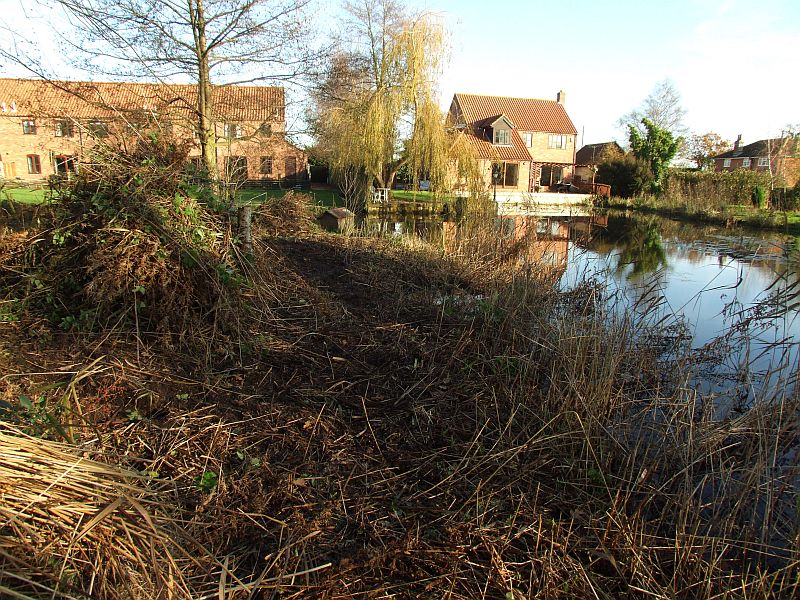 Walking to the "Duck House" and turning back you see further piles that have accumulated. Reed that is growing in the lake has been retained. In summer we welcome the level of privacy that having the reeds in the lake in this area gives us, but it does highlight one of the issues we have. How much reed is optimal?

It is the cottage owners responsibility to maintain the parts of the lake that fall behind the cottages so it is not our job to control reed there. Additionally, as I understand it a certain amount of reed is welcomed by anglers as it provides cover for young fish and gives them a chance to grow rather than become meals for other larger fish. However, I am not convinced that it can be good to allow it to get too widespread and choke the lake and that it is certainly doing in other parts. 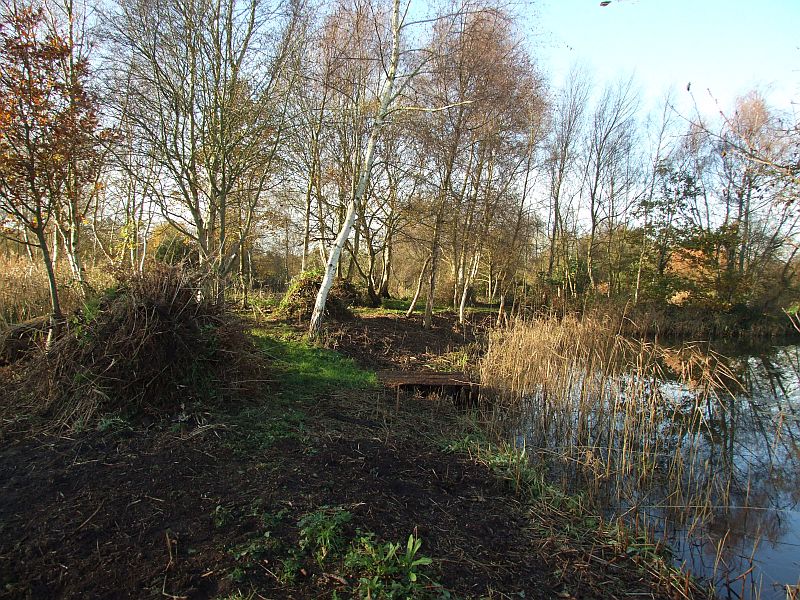 Moving further round and look back towards the cottages and house you see how this end of the island, at least, is now as clear as we need to have it for a fresh start in 2015. There's still a couple more trees to take down as we want to thin out the birch a little. We believe we see the effect of allowing trees to grow densely at the far end of the island. There  bramble has taken over almost completely.

Birch is a tree that seems to grow ever upward in a dash for light. When densely packed together they rely on the cover their neighbours provide not to get blown over in winter gales. If they survive they do, eventually, thicken out, but then it takes a skilled tree surgeon to take out such trees when they are over-crowded.

Our plan is to take out the excess of birch at an earlier stage so we retain enough light beneath them to encourage a range of habitats for wildlife and more spring flowering plants.

Coming off the island and turning away from the house to make your way further round the lake you reach this view over the bridge to the house beyond. 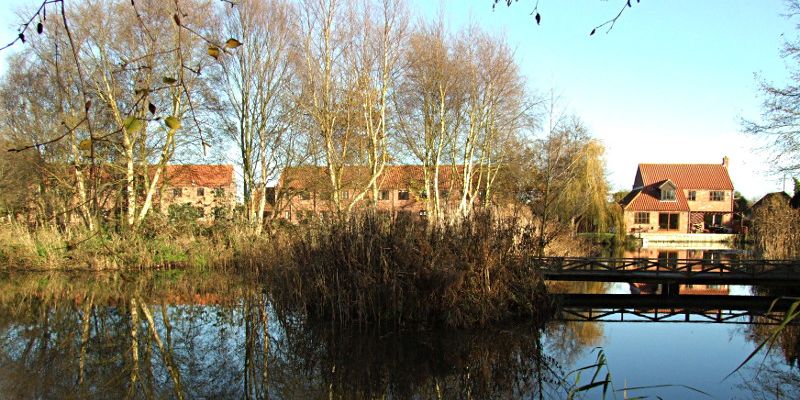 Back on 30 July this year, the same view looked like this: 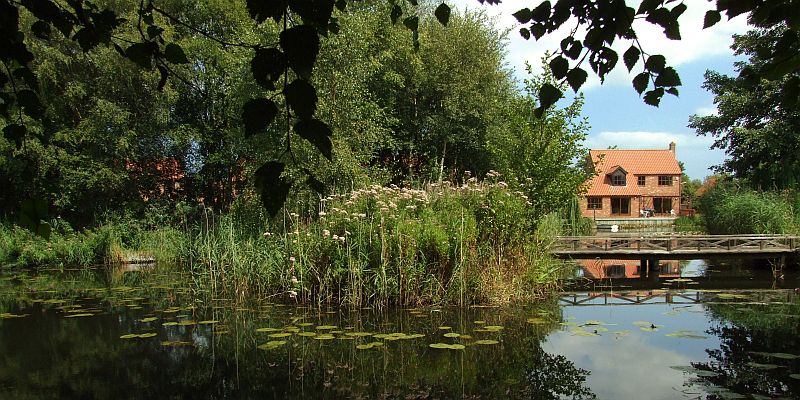 In July, if you take the picture at the right time of day you can get the Hemp-Agrimony, in the central panel of our "mural" in full sunlight. At this time of year it is always in the shade of the trees around the lake at the time when the rest of the scene is in the best light and, for me, that dark patch in the centre rather wrecks the overall composition. In summer, the trees in full leaf have the benefit of hiding the cottages and give the scene a a welcome sense of privacy. Perhaps the only thing I prefer about the winter version of this view are the reflections of the bare trees in the water, but if I was framing the shot for a winter picture I'd cut out much of the sky and concentrate on the water.