That's not a Squirrel!

It was ten minutes before people were due to arrive for a 09:30 meeting. I had had breakfast and had gone upstairs to brush my teeth and passing through the bedroom spotted what I thought was a squirrel coming down the mown path from the summerhouse towards the house.

It certainly had all the attributes I expect to see in a squirrel's motion. As the nose moved up at a 40 degree angle for another leap, the tail was still coming down from the previous leap, creating that distinctive wave-like pattern to its progress. As it came closer I began to question my identification. It seemed rather large, and there was always going to be doubt as, since buying the place in February, I had never seen a squirrel at Ruston House. 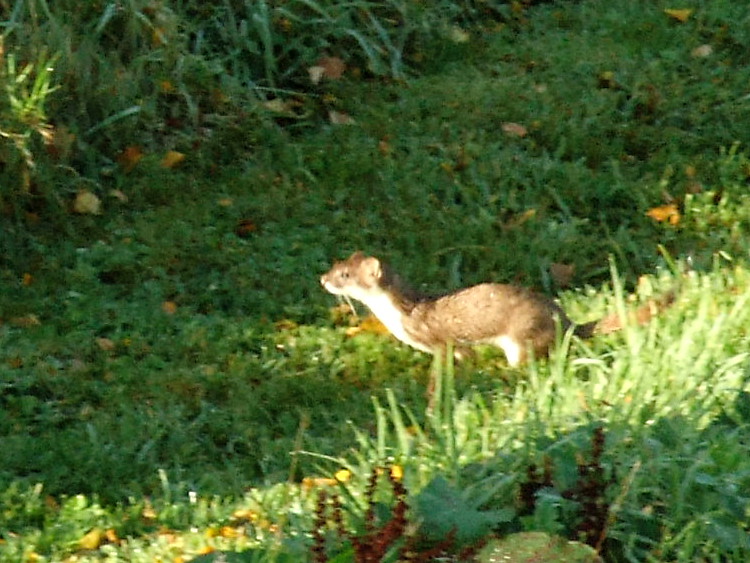 Then it stopped and turned forty five degrees across the path. That was no squirrel! What I was looking at was a weasel. That was a first. I can't remember ever seeing a weasel in the wild before at any time in my life. But a weasel it definitely was!

As ever I then tried to open the window as I thought if it had come this close - it was now level with the patio, not just the decking, behind the house - maybe it would not be put off my the motion above, but no, that just caused it to turn tail and disappear into the longer grass and weeds at the edge of the lake, where it stayed, sometimes raising just its head above the level of the vegetation, until I went to brush my teeth.

That's not a Weasel!