Before Diana and I bought the house the signs, outside declared "St George's Fishery" so, just after six o' clock at the end of St George's Day and another day's at work at Ruston House, I just had to take some photos.

Now it is the remaining lake, to the north of Ruston Reaches, that bears the signs and just through the opening in the hedge that leads from the road to its lake, is the Portacabin intended to provide the office for the fishery staff. It can be seen in the background of the picture I took. 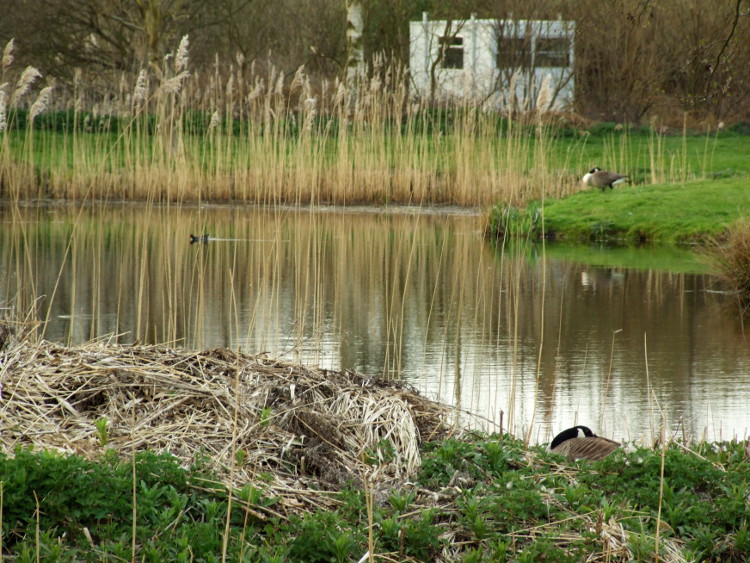 Seen scurrying across the water of "our" lake is a Moorhen. We see one or two about but have no idea if they are a breeding pair with a nest somewhere on the lake or just daily visitors. Hopefully someone will spot a nest eventually.

Meanwhile while "Daddy Goose", as we call him, goes about preening his feathers on the lawns to the rear of the cottages. Mum-to-be lies, apparently asleep, on her nest on the island. This seems to be one of the few angles from which the site of the nest is obvious.

Actually, we have no idea which bird is the male. Both are marked so similarly that we haven't bee able to distinguish them. It maybe that they swap nest sitting-duties from time to time. Certainly, for brief periods, the nest is left unattended and maybe this is when they swap roles.

The first photograph we took of the nest was 20 days ago. We read that incubation takes 28-30 days so we should find out, within the week, what will happen when the birds discover that the eggs won't hatch.

Interesting times are ahead...