Rustling in the Undergrowth

It was another warm bright day so, as usual, I treated it as excuse to take a wander, with my camera, round the grounds.

Going anti-clockwise around the lake I was nearing the bridge to the island on the return leg when I decided to make the turn to go to the far south westerly corner of the plot behind the reed bed, that once served as Ruston Reaches sewage treatment plant - plant in the very literal sense!

Here the dyke along the southern edge of the property joins the main dyke running north-south past all the properties on the western side of Chapel road. The embankment round the reed bed stands almost six foot high on its western side and the path round it takes a steep climb to run along the top of its southern side.

I stopped to take in the view across my neighbour's plot. I'm always impressed how tidy he keeps it and the dykes that run along his boundaries. As I stood there I heard rustling in the undergrowth between the path up the embankment and the dyke. I assumed it was a small bird ferreting about for insects, grubs or seeds. 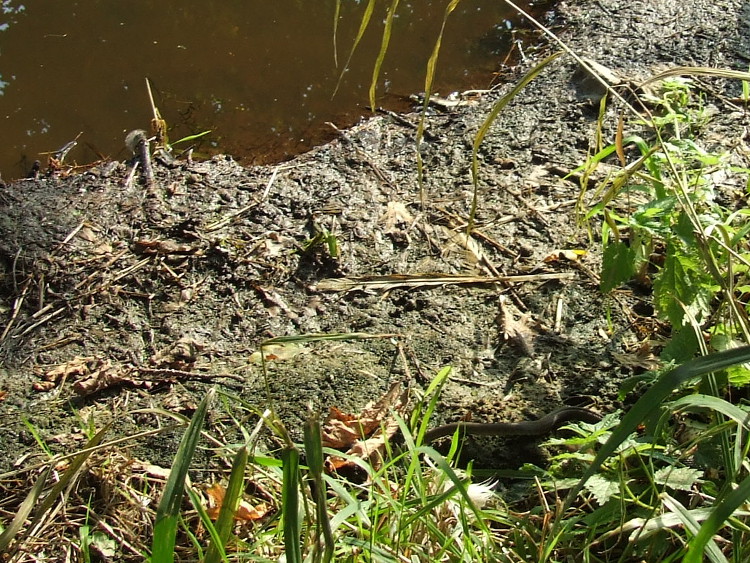 Then there was more rustling and I just had time to lift my camera to my eye as I saw the body of a grass snake loop across a gap in the undergrowth a couple of feet from my shoes.

This was the third time I had seen a grass snake in the grounds of Ruston House. The first was the one I photographed swimming across the lake back in April.  Then, in early August, a group of us saw another while we were walking round the grounds. I regretted not having my camera with me. That one darted away across the top of the heap of grass clippings and other compost beyond the embankment behind the summerhouse. I suppose it shouldn't be a surprise to find them there. Warm rotting compost is supposed to be one of their favourite haunts and this one, on a south facing slope was being warmed still further by the sun.