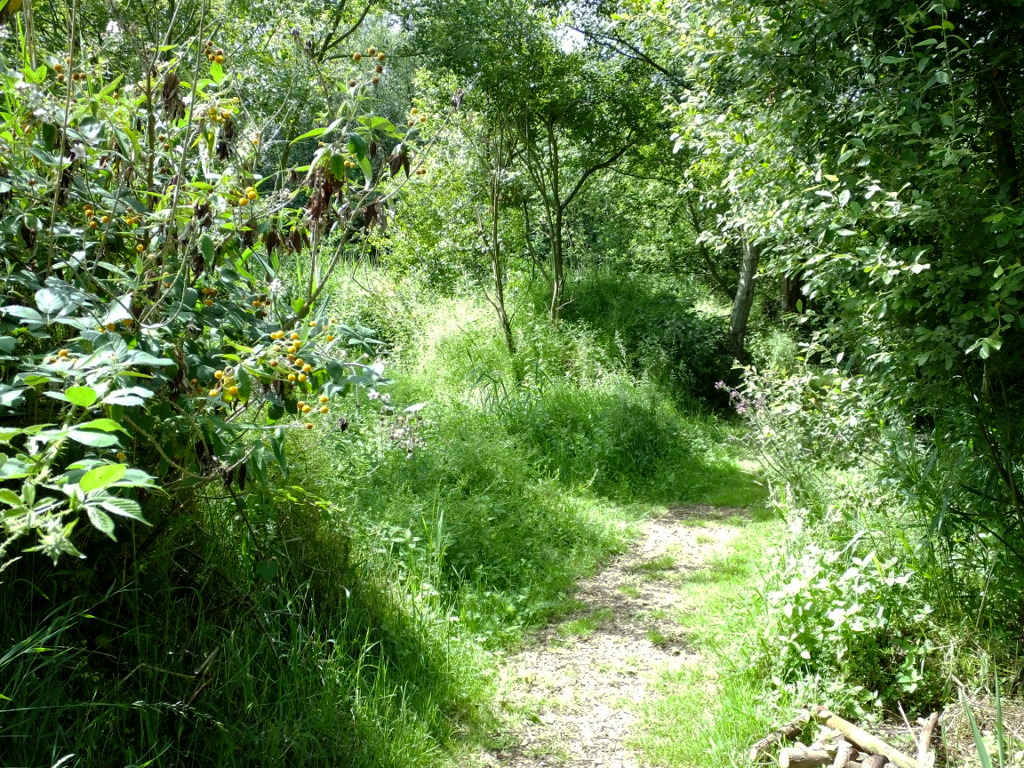 Here the path begins to turn to the north. The Globe Buddleia with its orange flowers, seen on the left, marks the back of the Reed Bed, mentioned in Part One. It has always been our plan not to plant anything non-native in the grounds, so you might have expected us to rip out this Chilean import, but closer to the house there have been various evergreen planted by the two previous owners and, so far, we have not resolved what our policy should be on removing non-native material, so all plants already here when we bought the house remain in place.

Beyond the buddleia, just before the two wispy birch trees, is where you can make your way around the back of the reed bed and reach the far end of the "High Road", also mentioned in Part One. 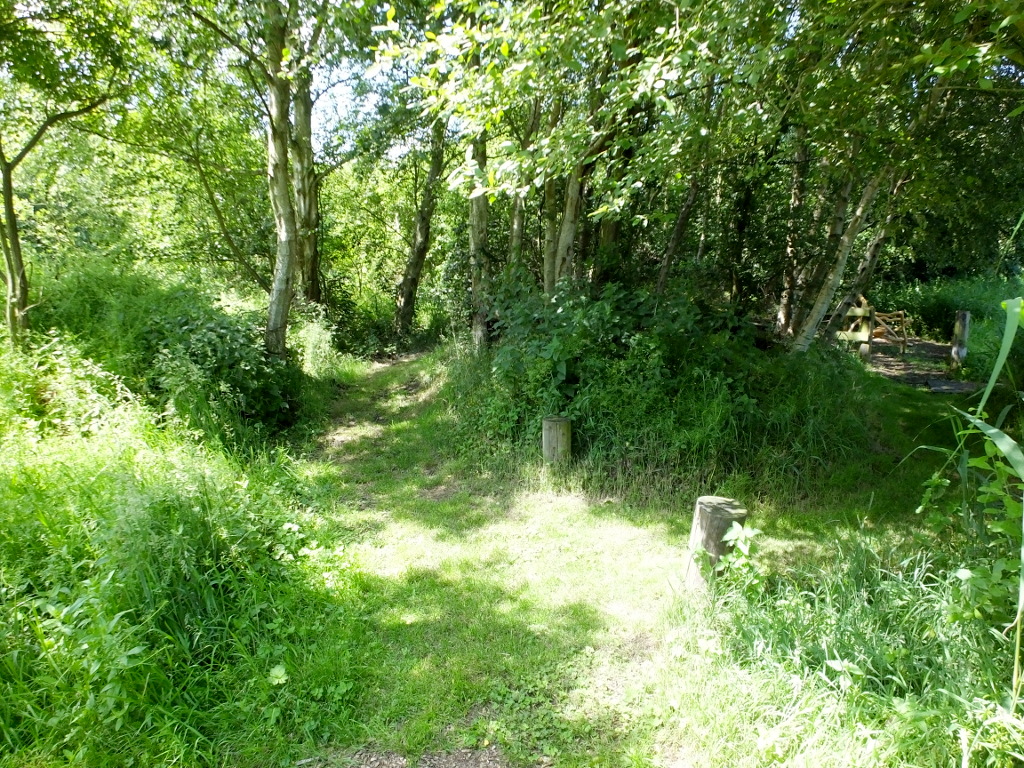 Drawing level with that route around the reed bed, a junction can be seen just ahead on the right. This takes you on a short spur that leads you to one of the remaining fishing stands and to where the Ruston Bench now stands. We'll take the turn... 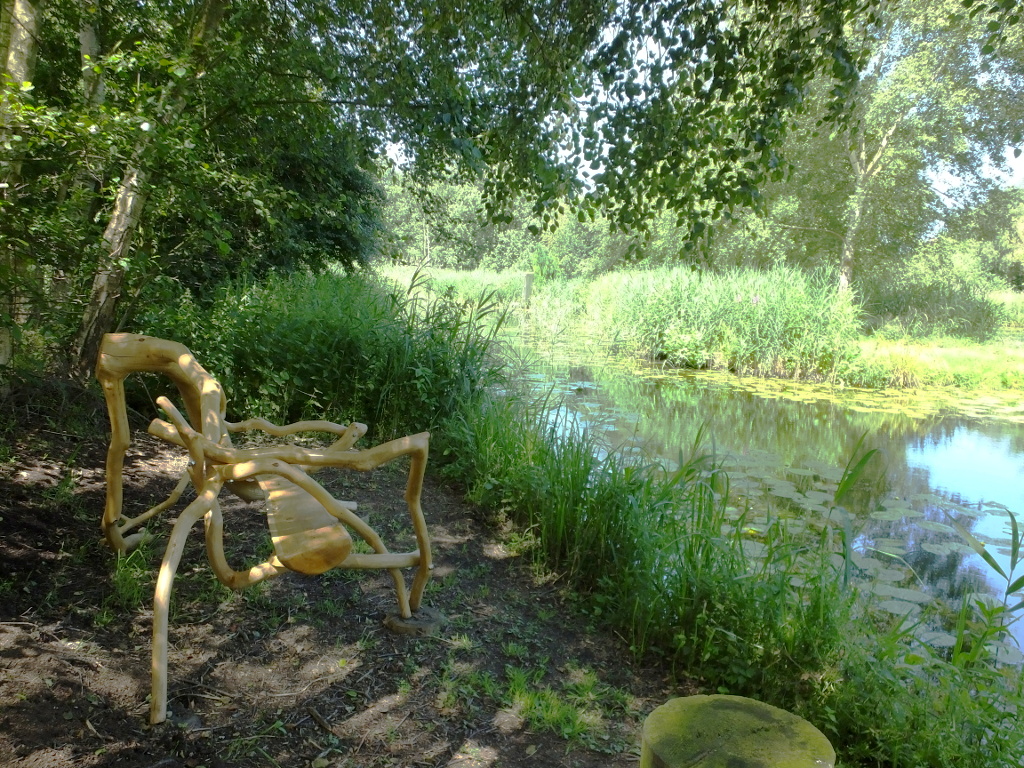 When we moved to Ruston House the fishing stand marked the end of the spur, but the ground just beyond was cleared and the Ruston Bench, that the Green Team brought to us in March, and stood on the lawn by the house until May, now has its home here. 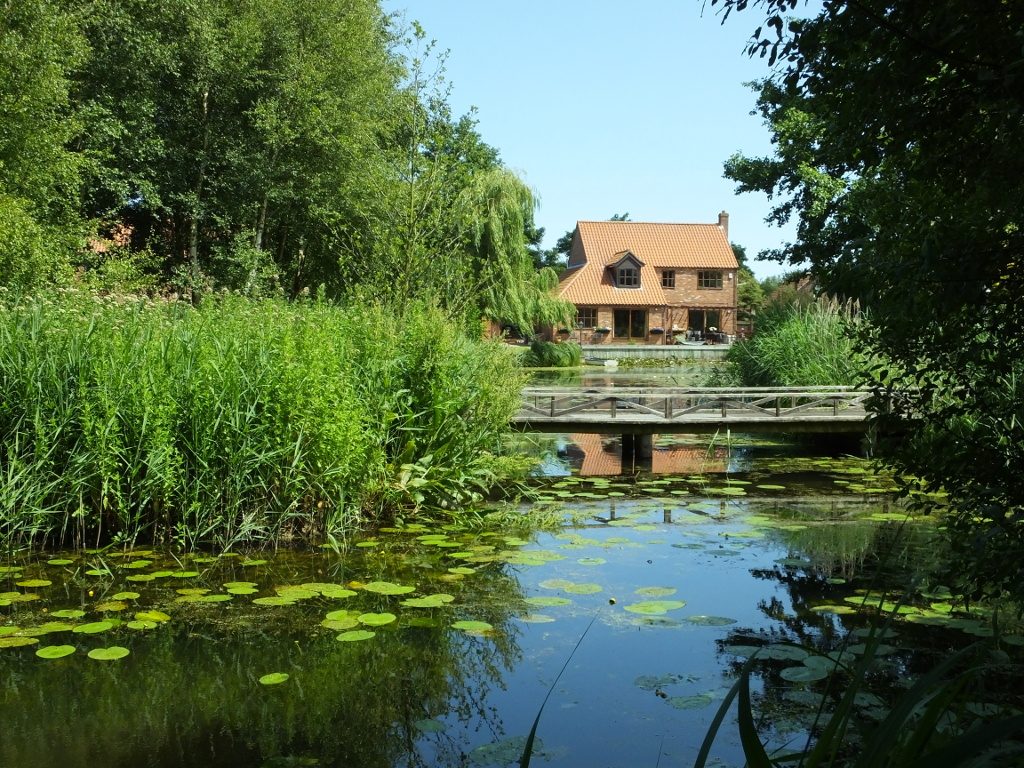 Still standing on the fishing stand, if we turn eastwards we see the view back to the house, and swinging left... 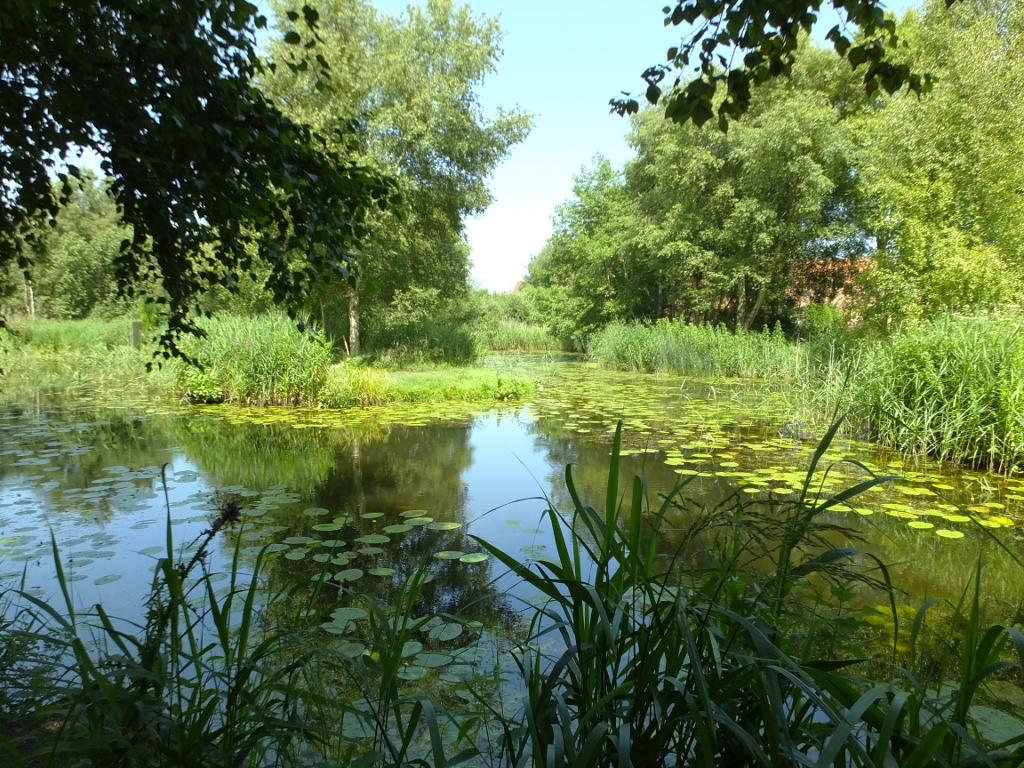 ... we see the area of the lake we call "The Pool". It's the one area of the lake that we have named. All other parts of the lake are referenced by some other landmark. After the area immediately behind the cottages, it's where you will most often find holiday makers fishing, and it's where we have chosen to focus our seating and viewing areas. The Ruston Bench is already here and the plan is to have a viewing platform on the island facing the Pool ready by the time of our wedding on 12 September.
. 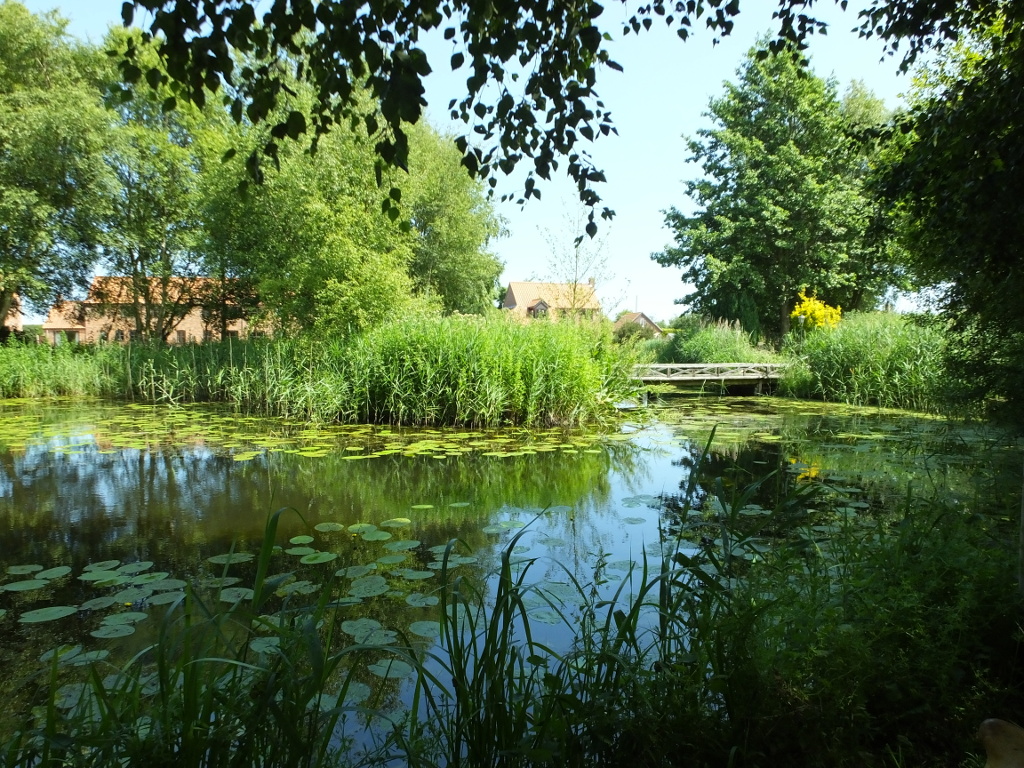 Stepping forward to sit on the Ruston Bench, this is the view you get once there. It's a slight disappointment to me that the loss of a birch tree on the island and the removal of a buddleia in readiness for the forthcoming structure to be built there means that the cottages are a little more visible than they were last year. Hopefully the new "Island Summer House" as the Green Team are calling it, which is to stand on the planned viewing platform will help give us back some of the privacy.

With the detour complete, we return to the main path to continue the tour. 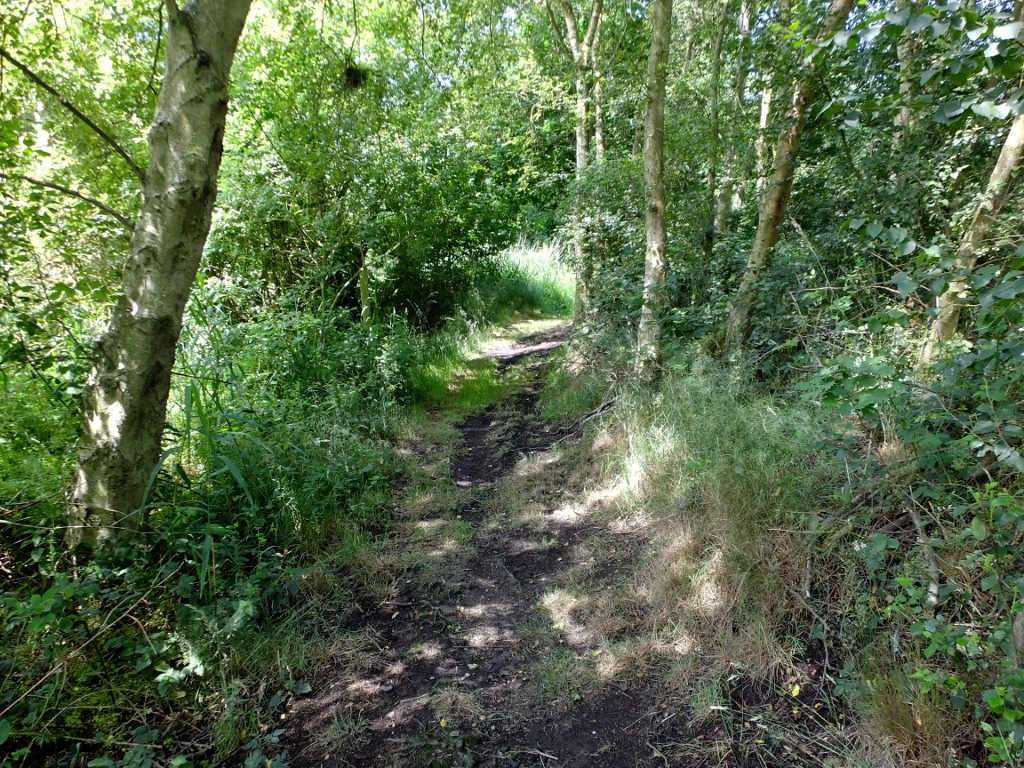 We have climbed a little from the two junctions and are now heading due north a few yards from the dyke that forms the western boundary of the site. This part of the path sits half way up the back of the spoil heap created when the lakes were dug. It is always in partial shade and grass struggles to grow on the peat which is so quick to dry after rain. The path is also strewn with roots from the birch, alder and one or two other species that grow to either side. 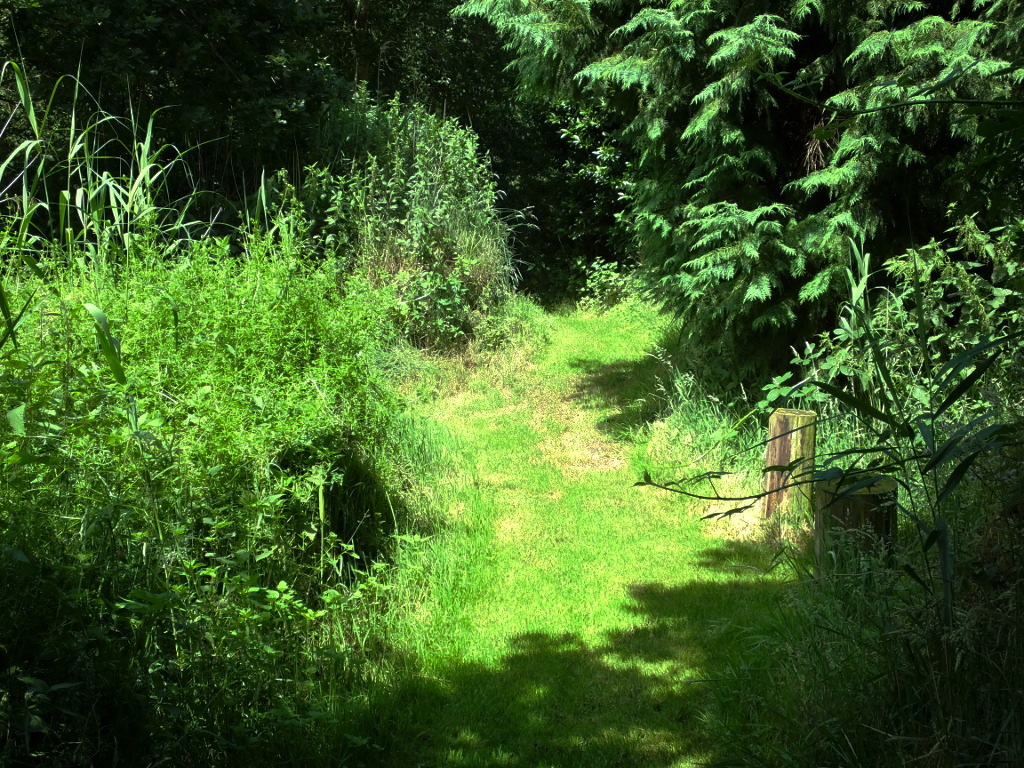 Suddenly the spoil heap runs out and we come to "The Dip", one of the few named areas in the grounds. Trees seem to prefer the slightly higher drier ground ahead, on the right, and behind us in this area. To the left is the boundary dyke, hence its the only place, as we head to the northern boundary where the sun can get down to ground level. The damp ground and sun allows the grass to grow well on the path and to the left reed and nettles take advantage of the sun.

We have no plan to clear the nettles as we understand that butterflies enjoy them. So while we do remove nettles in some areas, in order to allow other native species to thrive, and we do cut them back close to paths, in general you can expect to see large banks of nettles at several sites around the grounds.

On the right you can see a pair of stumps made from old telegraph poles. When we moved in these always marked where a fishing stand could be found and here is another short spur path that leads to the lake.

On the left, just before, the rise in the ground on the far side of The Dip, is the start of the "New Path" that was begun before the end of 2013. You can also find several references to work on the New Path in a search of entries in 2014. 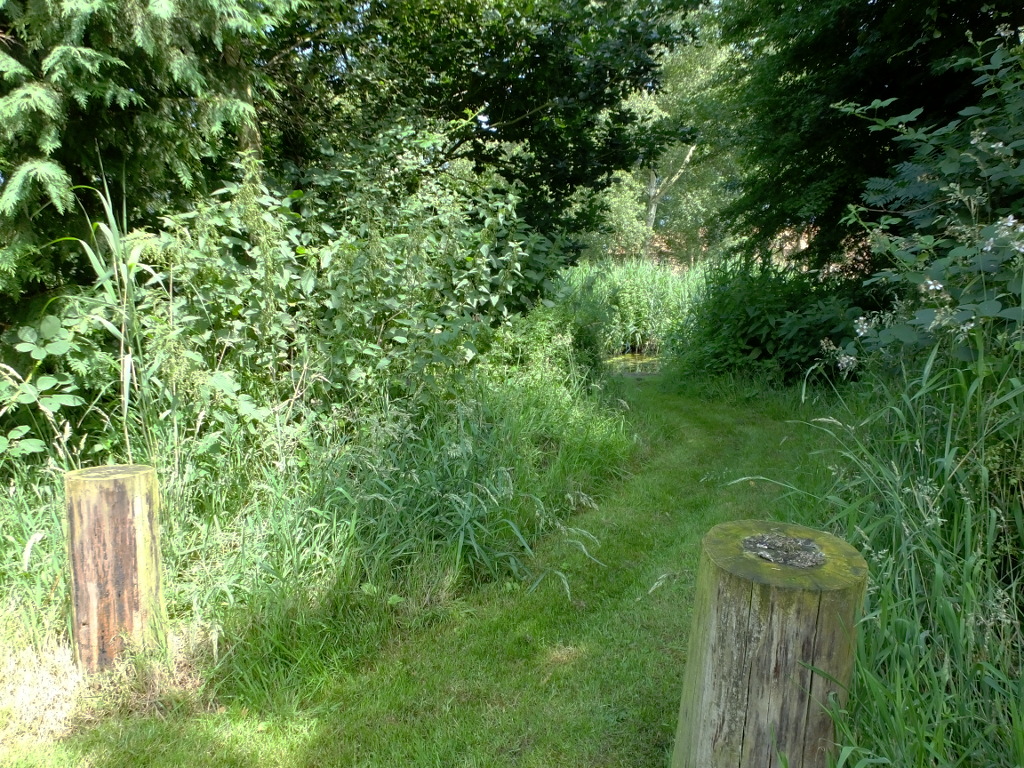 Drawing level with the spur to the lake you can see that there's a slight kink in the path. It gives it a sense of privacy and from time to time we consider it as another point at which to add some seating. The fishing stand at the end is still there - though the plan is to remove all those found around this part of the lake. 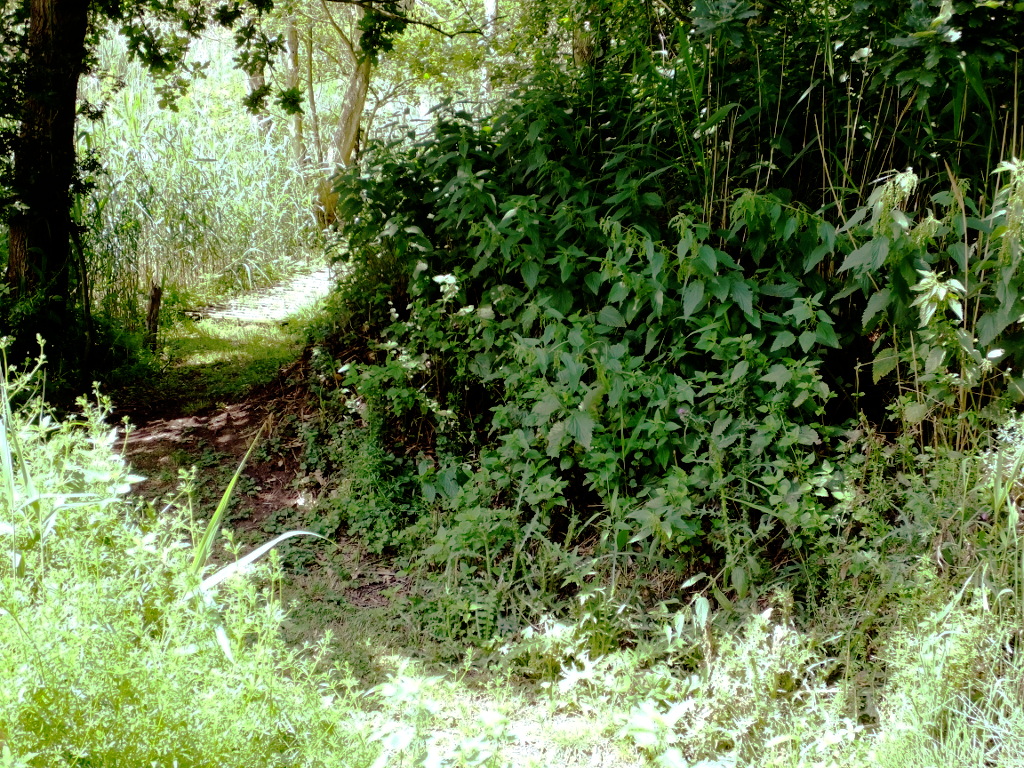 Moving forward again and looking to the left you see the beginning of the New Path.

The "Later Post" link below will take you forward. You can return to the start of the Tour using the "Earlier Post" link.