If you've joined the tour at this point, you might want to use the Earlier Post link above to see the very start of the New Path. Alternatively, go the The Beginning of the tour. 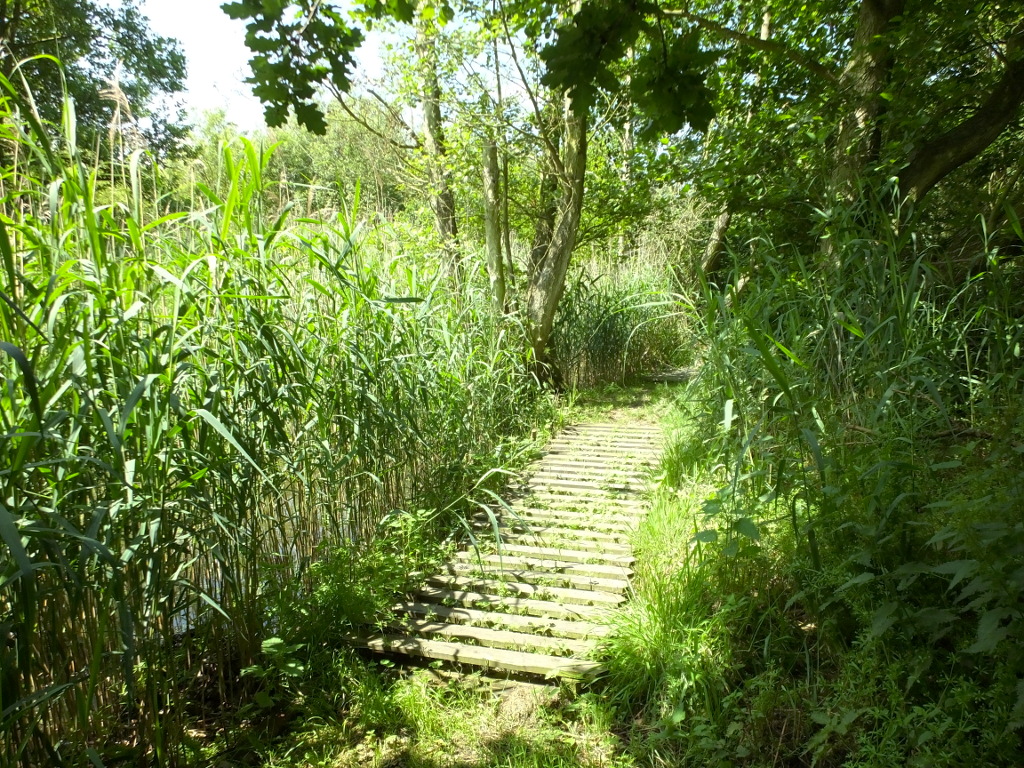 Leaving the main path we have come a few yards from the junction. The path turns to run alongside the dyke that marks the boundary of the property. At this time of year the water level in the dyke is normally quite low and the path is quite dry. That's not the case in winter. As the path was constructed it was decided that fence beside the kitchen was redundant and that has allowed it to be used as a temporary boardwalk. 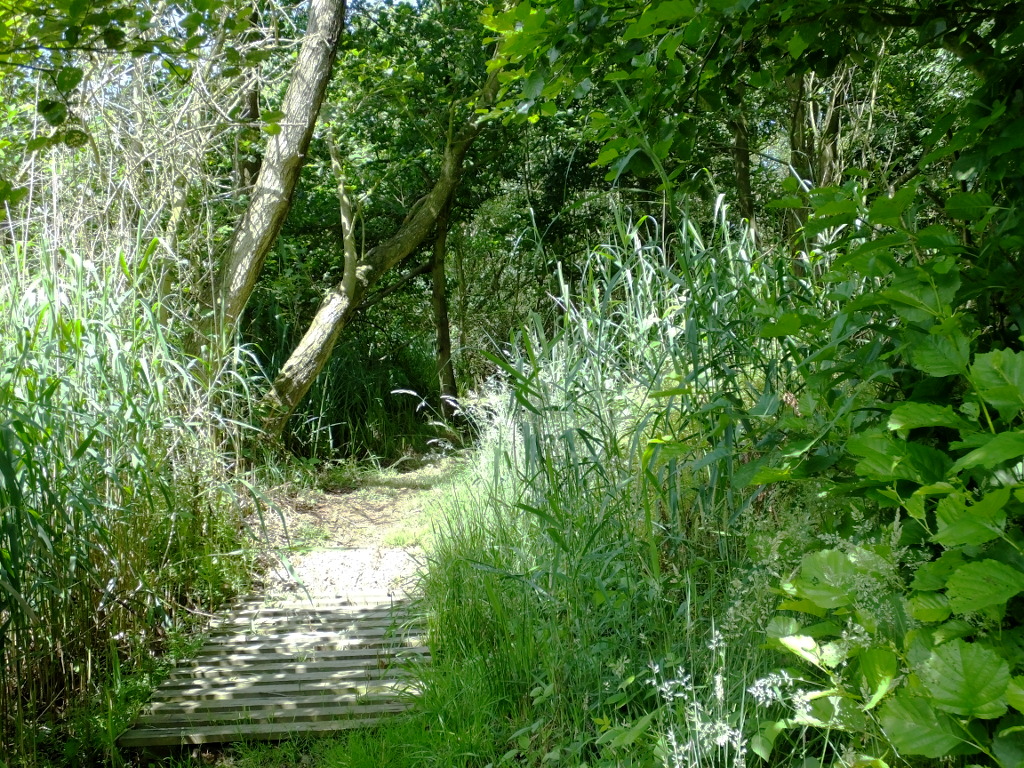 In fact, there were two panels of fencing that were laid along this section of path separated by around three metres. It seems that for this shot the camera was deliberately held over the vegetation growing beside the path. The plan for all the paths was that you should never be able to see more than ten yards ahead. In other words the paths should constantly twist and turn to add a sense of mystery about what you might see around the next corner. Perhaps I was just trying to accentuate those twists for.... 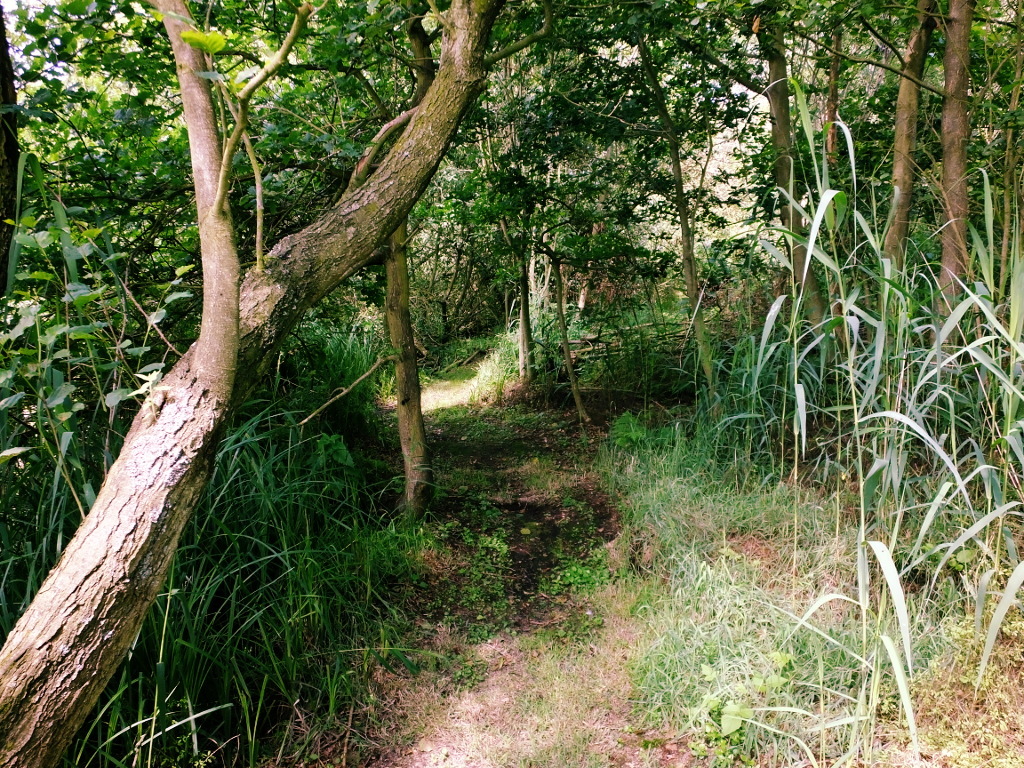 ... the next stretch, although it wiggles, has slightly more far reaching views. In this area we move a metre or two away from the banks of the dyke. In the distance you notice a number of saplings that have been cut laid on the ground... 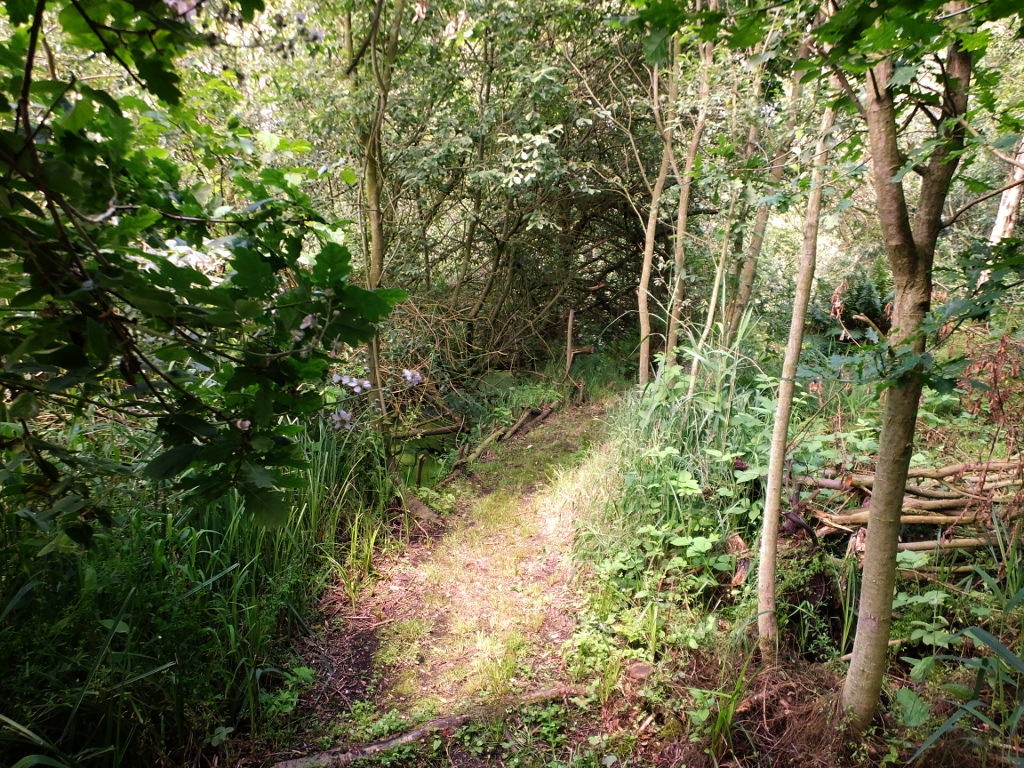 These are the remains of the vegetation that had been growing in this area and had to be cleared to create the path. Now we are close to the north west corner of the site and the path ahead begins to make its turn to the east. 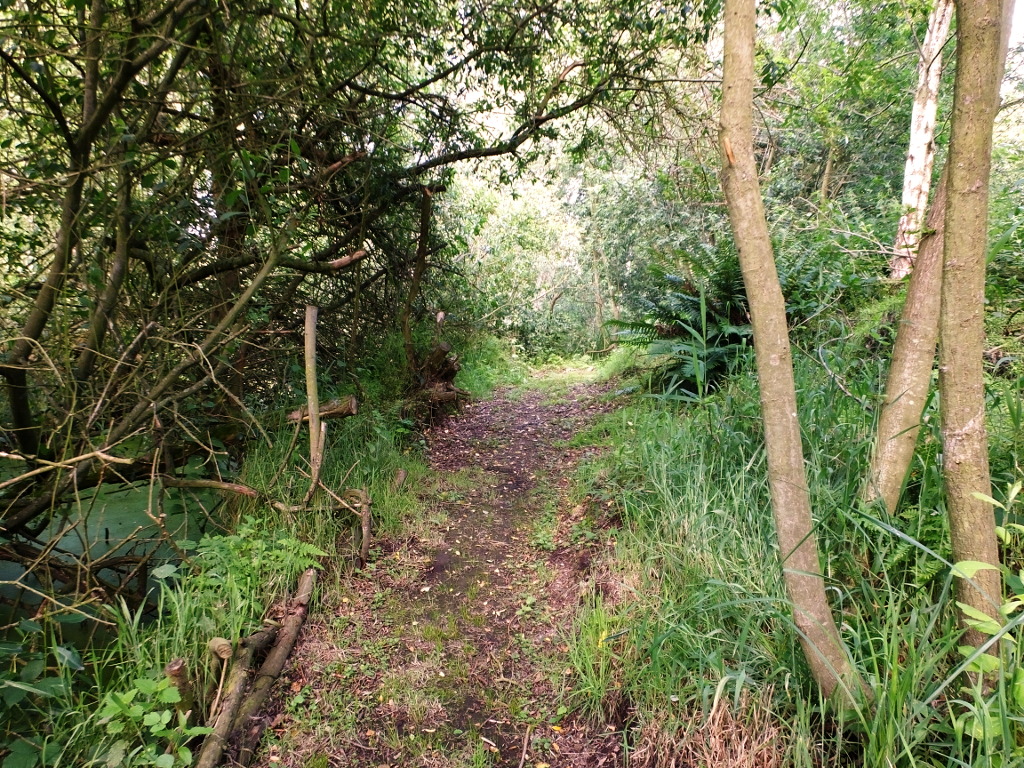 At the far corner of the site from the house where the western and northern boundary dykes meet a small triangular island was created when, at some point, it was decided to dig a short-cut dyke at 45° between the other two. I have never quite understood why this was done. There never appears to be any flow on any of the boundary dykes and the the idea that smoothing the turn might aid drainage seems a bit far fetched.

Although part of the grounds of Ruston House a crossing to the island has never been attempted. The duckweed filled dyke, which you can just see in the photograph, may be shallow but has seemingly bottomless mud beneath the water that would over-top any boot. It also seems pretty pointless to attempt the crossing as the vegetation on the island is particularly dense. So our plan is to preserve it as it is, to indicate the kind of ground through which the path had to be cut.

Ahead and to the right of the path is an impressive fern that stands almost a metre high in summer and about the same across. There are a few others, but nothing compares to this one. 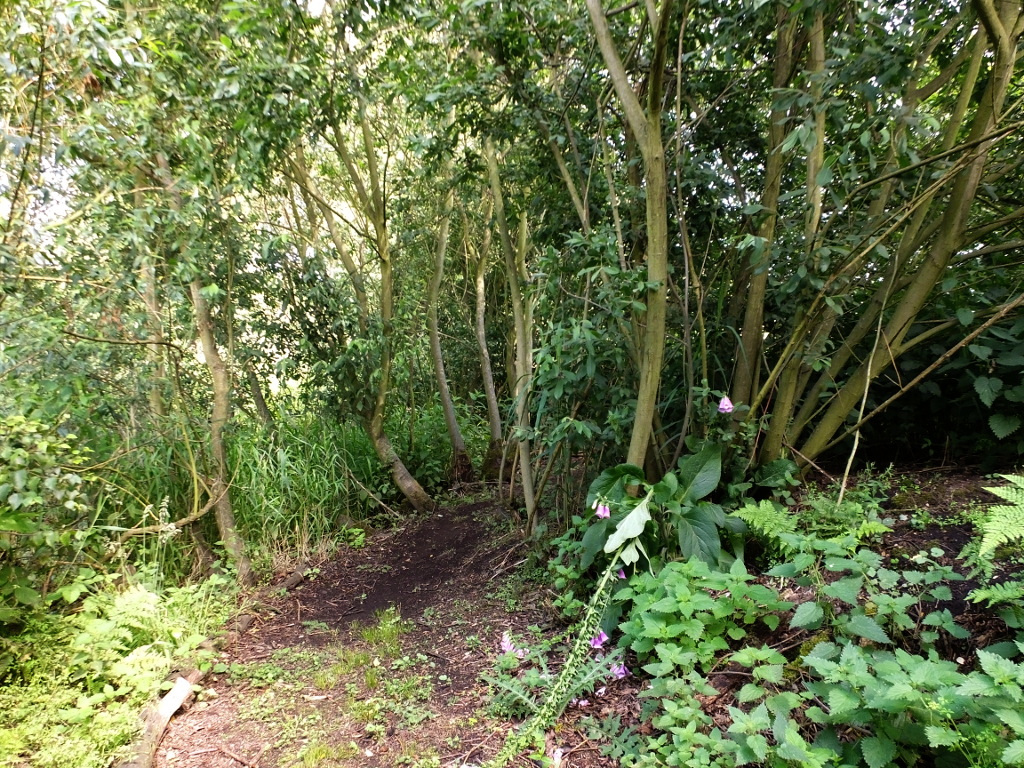 Moving on to just beyond the fern we are about to complete the 90° corner and be facing east. Here we begin to enter another stretch that runs along the back of part of the spoil mound from the lake. The decision on exactly how far to take the new path before it was to rejoin the main path was a tricky one. We wanted to avoid cutting down as much of the Crack Willow growing in this area as possible, but we needed some long lengths of timber to help build up a level path while retaining the loose peat that would otherwise gravitate towards the nearby dyke. 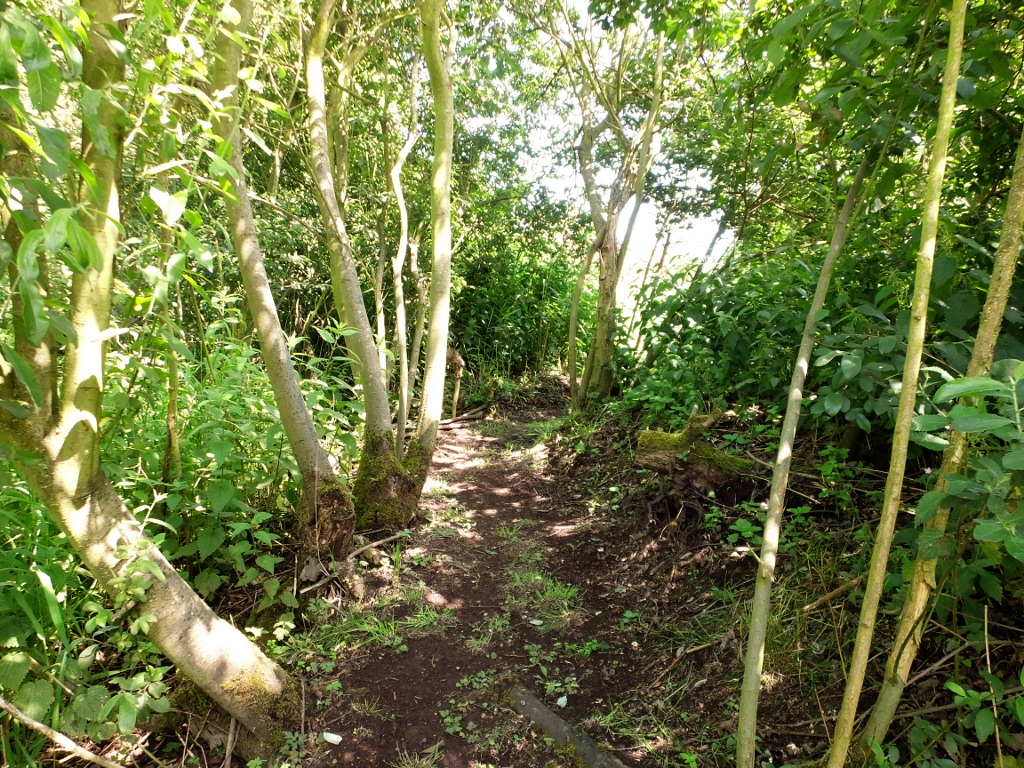 We are now moving eastwards and ahead is a sharp turn and the junction with the main path. 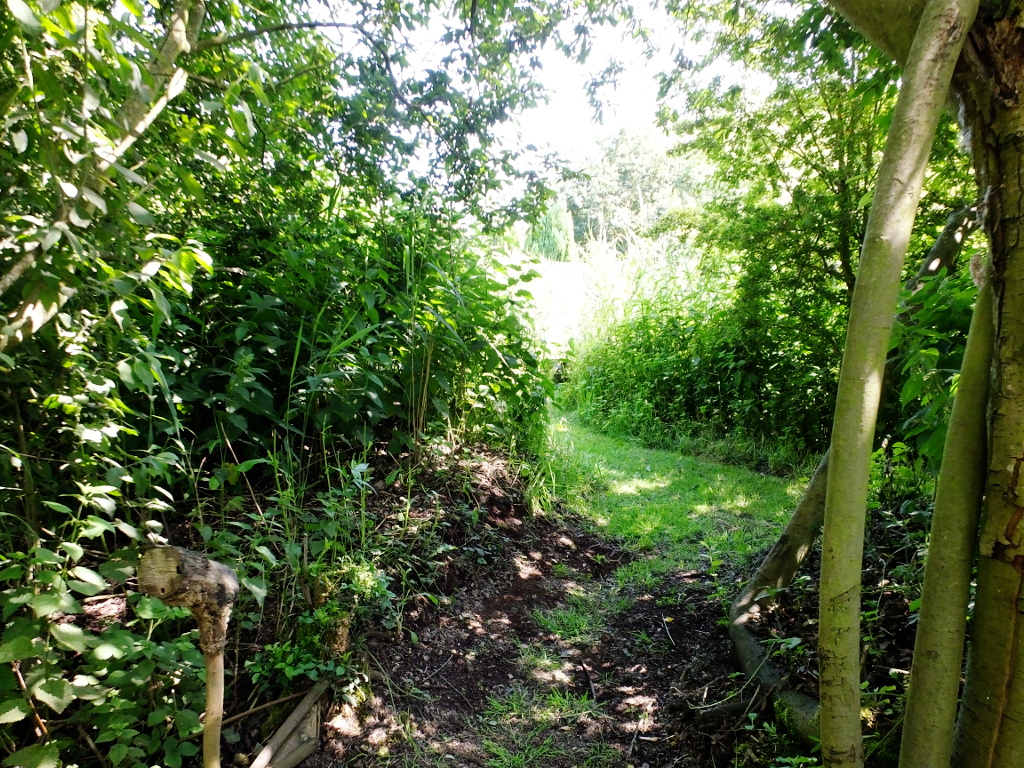 As we reach the junction and return to the main path it can be seen how the spoil was some two feet high in this area. The calculation of the volume of soil that was to be removed to try to form a level path was part of the problem about how far to take the new path. That's because the soil removed when digging through the embankment was needed to create the level path along which we have just come. All in all things worked out remarkably well, although there still is a need for some work to be done to hold back the soil that continues to trickle down from either side onto the path. 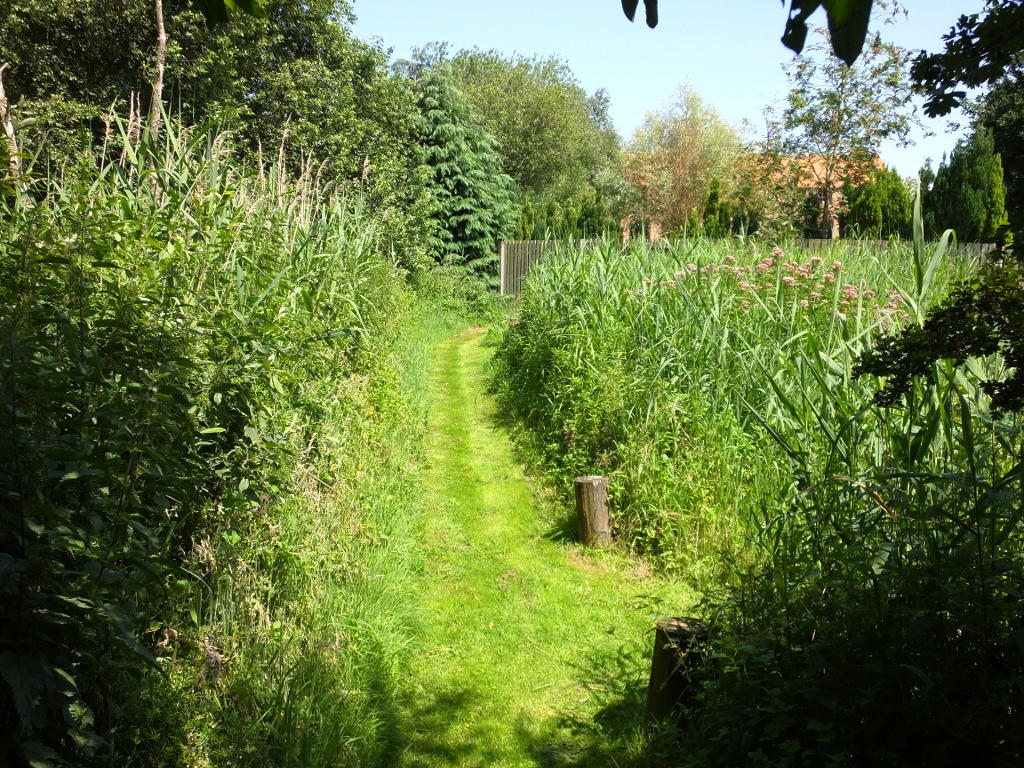 Once back on the main path we turn left and emerge from the trees and there is a short straight path to the fence and gate that allows you through to the cottage's communal grounds. In the foreground can be seen the last pair of posts that still indicates a fishing stand. 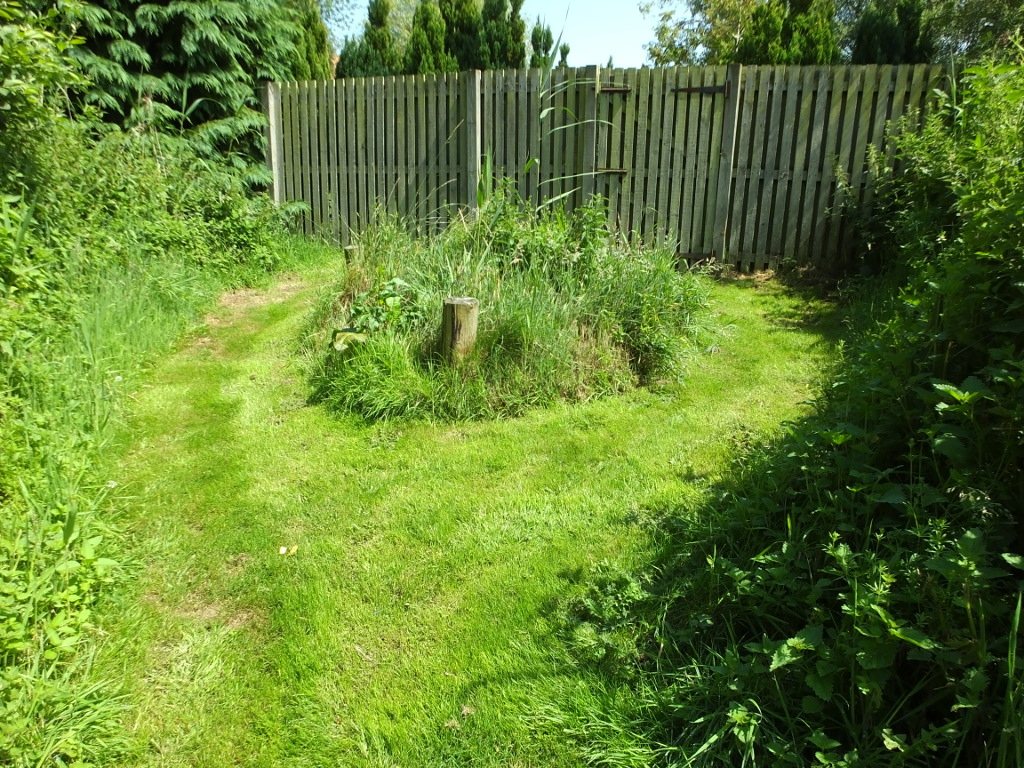 Now at the fence, it can be seen that the path has has a turning circle in front of the gate. There are two more posts that once marked a path to a fishing stand a few yards to the right. However, that stand was right alongside the fence making it almost unusable and its deck has been removed, presumably at the time the fence was erected and the boundary of the communal grounds for the cottages created.

From here, the next part of the tour takes on a return journey back along the main path.