Thursday 9 July was a warm sunny day, with just a few quickly passing clouds in the sky. All the vegetation seemed fully grown with the paths through the grounds recently mowed. It was the ideal moment to create a record of how how the grounds had developed by the summer of 2015. 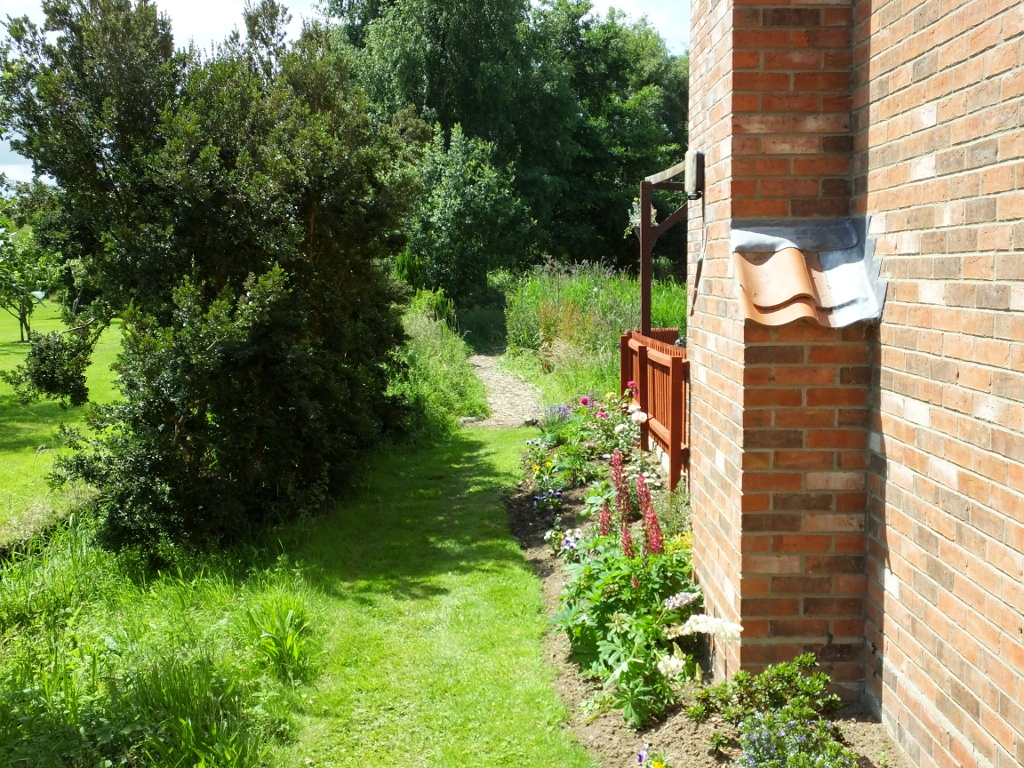 I began the tour in the way that the anglers might have done in the days before our ownership, coming through the side gate to the left of the office. The Green Team had been responsible for digging out the bed against the house. Diana had planted it up a couple of months earlier. 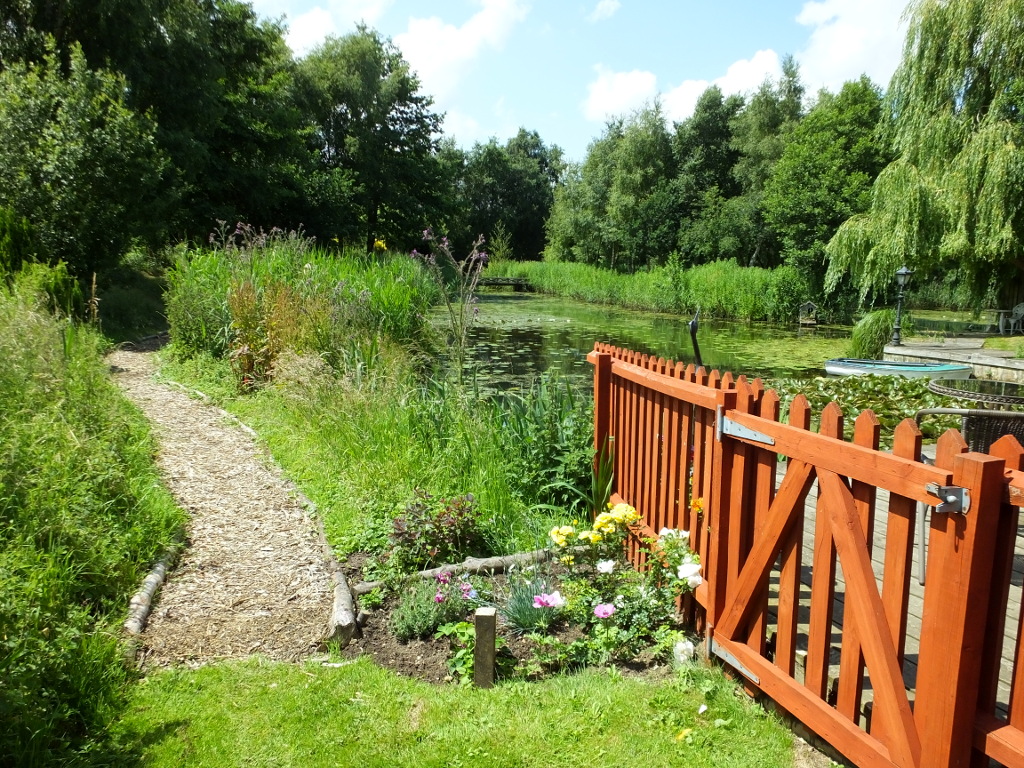 That was also the time the fencing on the end of the decking had been given a new coat of wood stain. The path ahead, which runs almost due west close to the southern boundary of the grounds, had recently received some fresh chippings a by-product of the tree surgeon's work back in May.

It was amongst the vegetation just beyond the fence that, last year, I was able to photograph rare Norfolk Hawker dragonflies mating. It was also at this point that I have taken photos of a Fox and a Stoat. 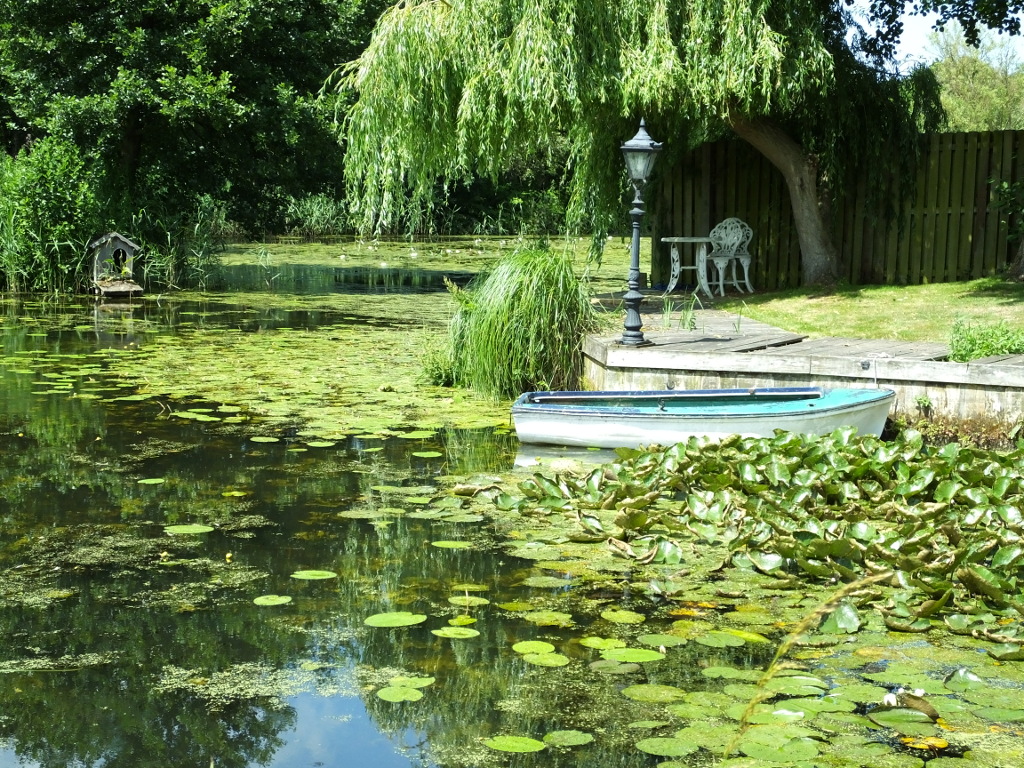 As you get beyond the back of the house, if you  look to the north, you begin to see how the lake opens up behind the neighbouring cottages - choked with lilies and weed at this time of year. You'll see how the pink lilies that surround the boat seem to grow well above the water level. In contrast the native lilies, those with the yellow golf ball sized flowers, always seem to lie flat on the water surface. There are also white lilies that grow behind the house in two large patches. They don't protrude half as much as the pink lilies. 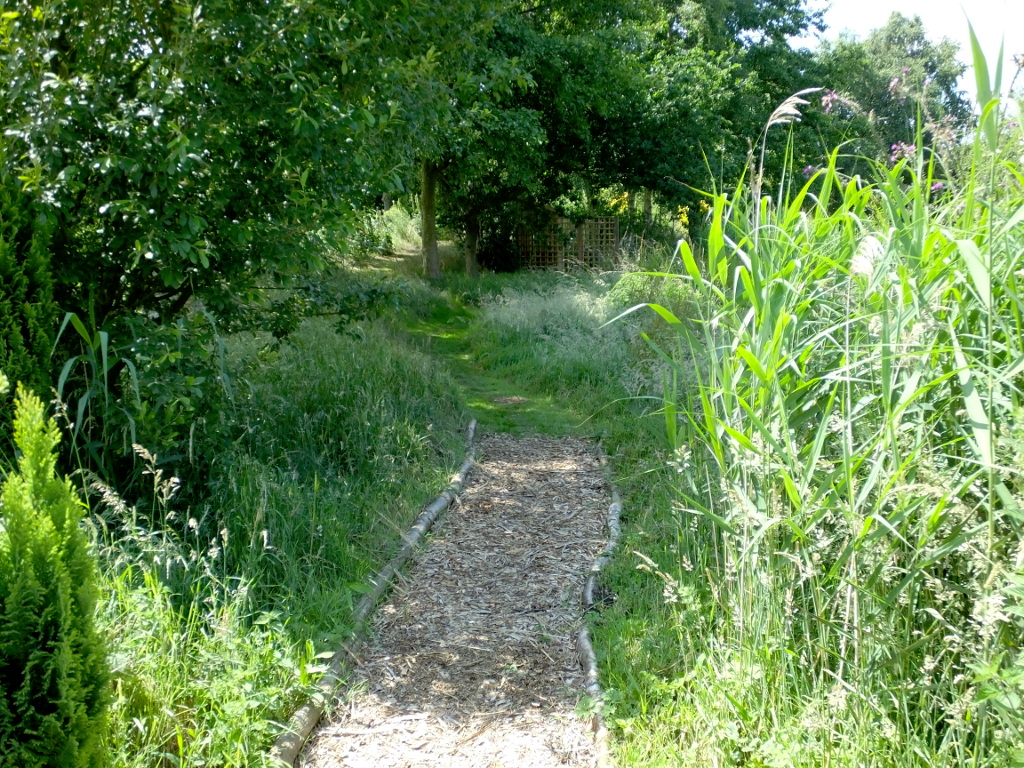 The chippings don't extend too far. They were added to a short stretch of the path just beyond the house in December last year when it became clear the path wasn't standing up to the winter traffic once the Green Team had begun their work. 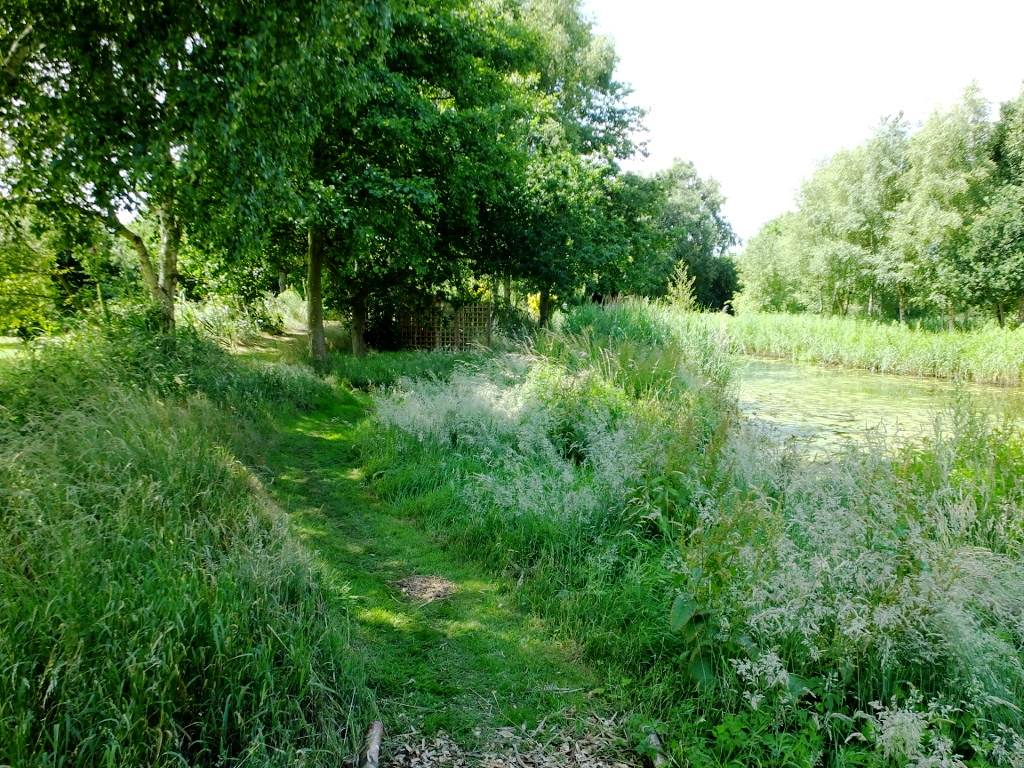 Once you get beyond the chippings you begin to notice the surprising range of grasses that grow on the banks of the lake. In the days of our predecessor when all this area was kept mown no one could have been aware of the wonderful variety of flowers that different grasses have.

Just ahead of you, but invisible from this angle, you will pass over the route that we call "Swan Crossing". For the swans, ducks and moorhen that approach our lake via the dyke, that forms the boundary of our site this is the narrowest piece of land they need to cross to reach the lake, and even at the height of summer, when the grass is growing fastest,  there is enough traffic on it to keep their route clearly in evidence. 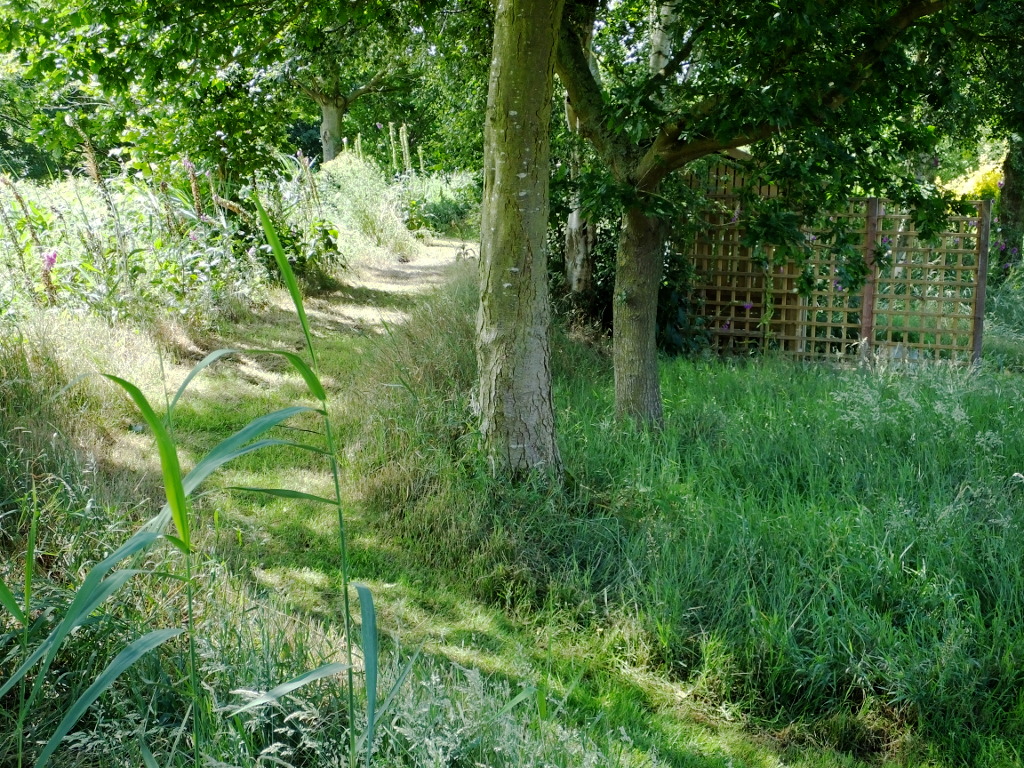 A few yards beyond Swan Crossing you reach the first junction you will encounter. A path leaves to the left and rises sharply as it turns to run parallel with the boundary dyke. This we call the "High Road". It runs along the crest of a spoil heap that was created in the late 1990s when the peat was dug out of the fen to form our lake.

We will continue along the main path keeping the trellis structure ahead to our left. 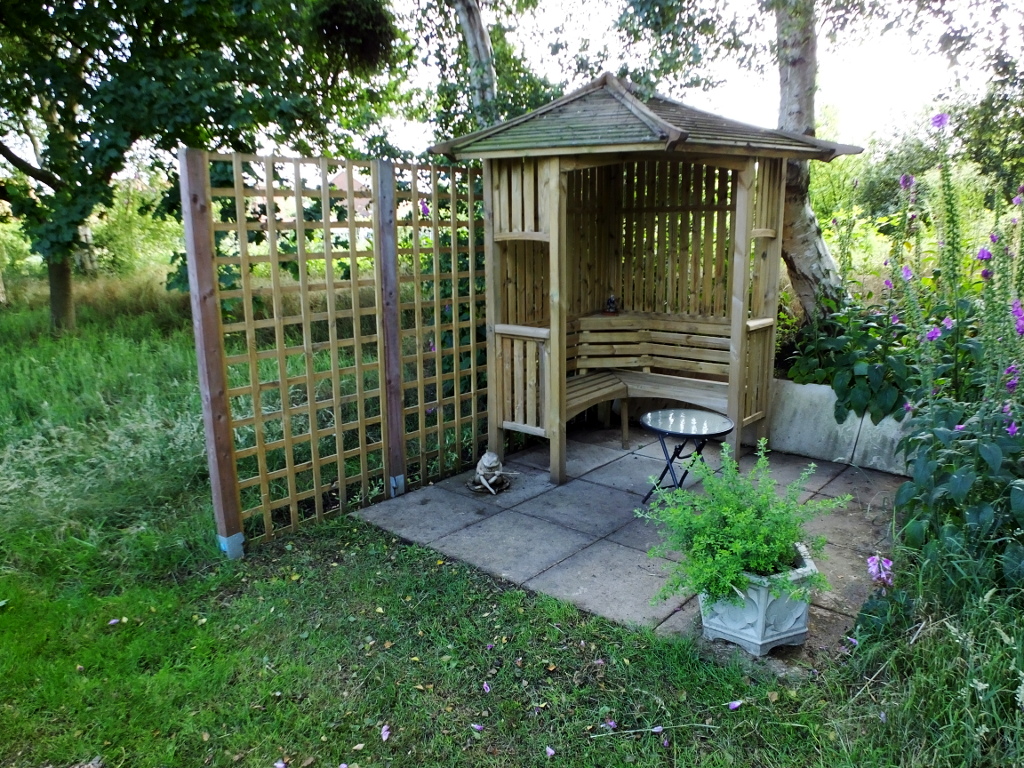 The trellis was erected when the patio was laid and the Arbour Seat Erected between May and June 2014. It was all part of the project to replace the rotting summerhouse that we inherited on purchase and was photographed on 11 March 2013 with a close-up taken a few days earlier. 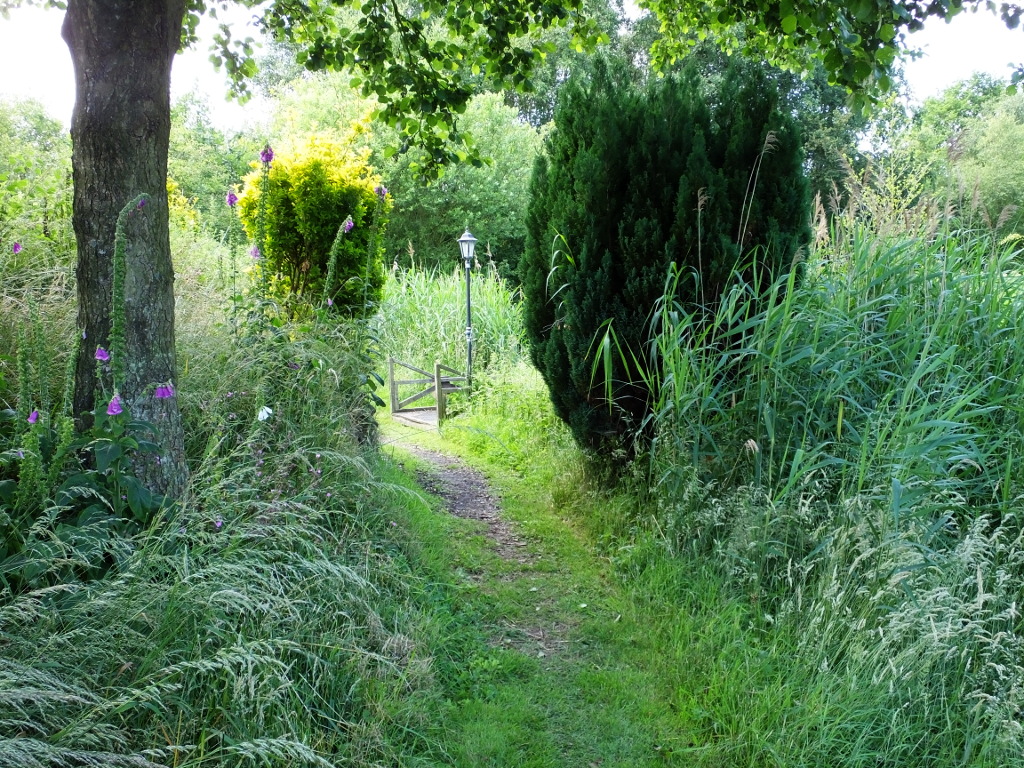 Looking ahead from the arbour seat we see the bridge to the main island. If the foxgloves were ever formally planted it makes no difference now, they seem to grow throughout the site where there is dappled light under the trees. 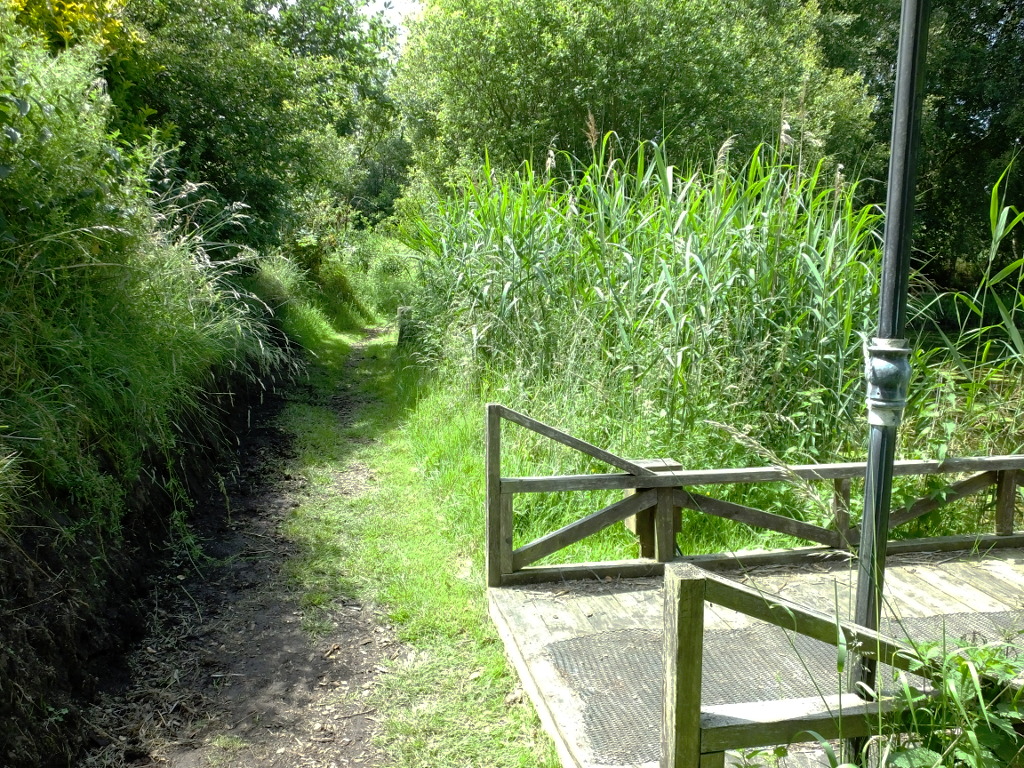 By the time you reach the bridge you are alongside the "Reed Bed". This was originally intended to provide all the sewage treatment required by Ruston House and the Cottages. However, once all the cottages were in operation it was unable to cope and a mechical treatment plant was installed next door under the car park in front of the cottages. The reed bed is now redundant and we have a half formed plan that we will try to turn this part of the site into a wild flower meadow, albeit a rather small one, as it's the only part of the site that is almost entirely clear of trees.

You can see that there has recently been work done dig out some of the embankment around the reed bed to make the path stay level. The small box seen on the far balustrade on the bridge contains the power supply for the lamp standard on the near side of the bridge.

We shall cross the bridge later in our tour, but for now we carry on past the bridge. 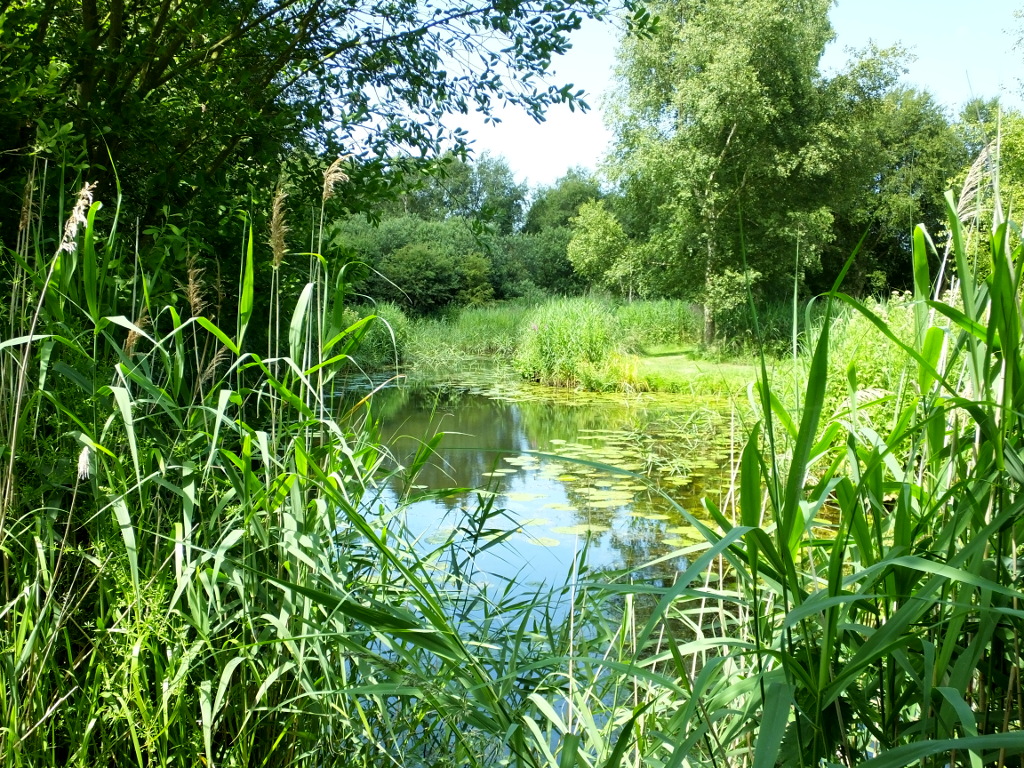 We are now close to the back of the site, some 100m from the road and about to make a turn along the back of the site beyond the lake. Looking to your right  through the reeds, to the left you see the furthest arm of the lake running towards the smaller island within the lake. While, towards the right, you see the mown path terminating at the tip of what we call "The Peninsula", the end of the U-shaped grounds that form the communal grounds for the holiday cottages next door.