You can use the Earlier Post link, above, to see the bridge that we are crossing as we start this section of the tour. Alternatively, you might prefer to start at the The Beginning of the tour. 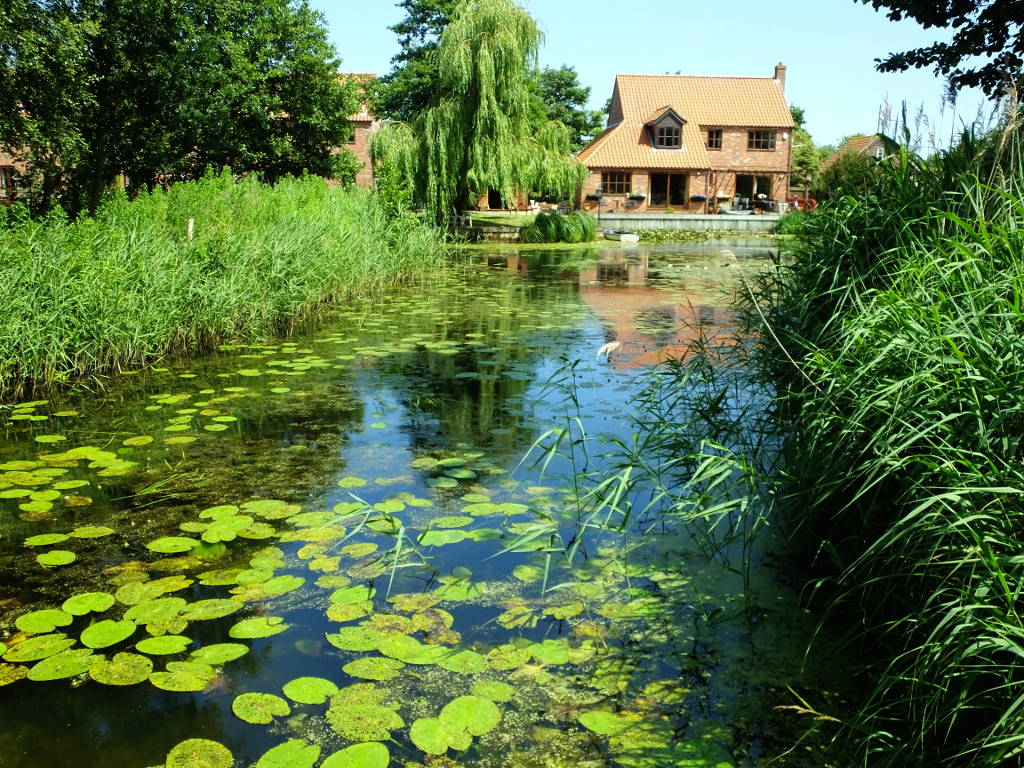 Having begun to the cross the bridge to the island, if we look to the right you will see Ruston House. At this time of year the lake is always very clear, with many water boatmen on the surface and a good chance of seeing fish in the water. 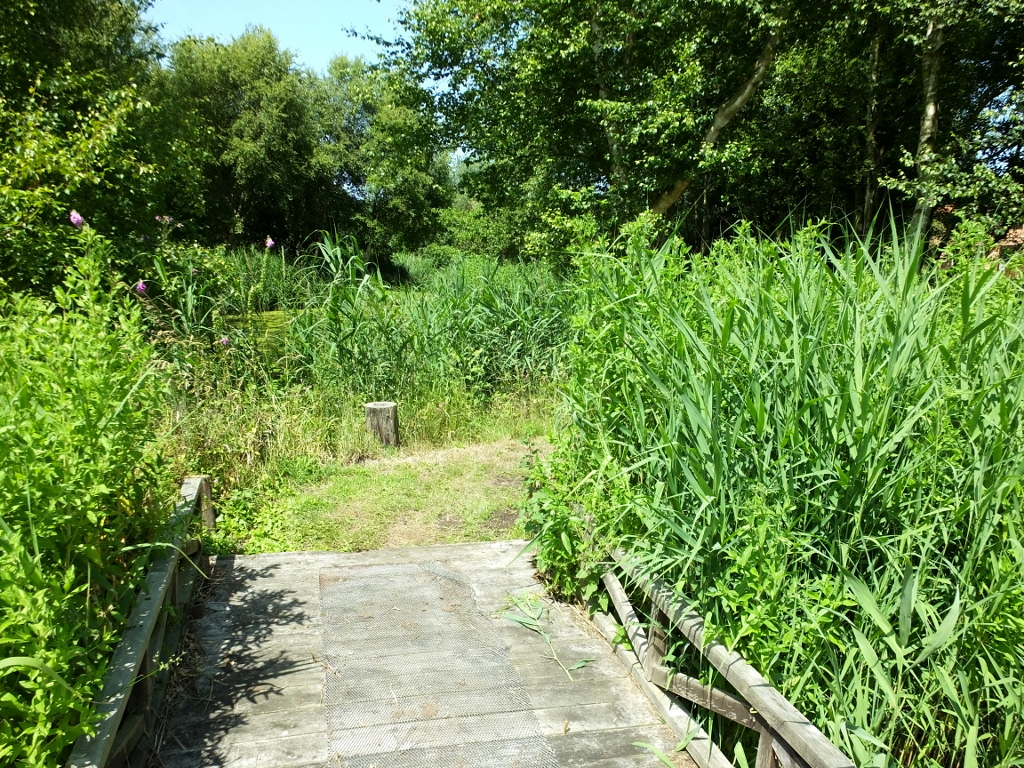 At the far end of the bridge the path takes a sharp right turn. You are guided that way by the posts, the only ones on the site that do not indicate a route to a fishing stand. 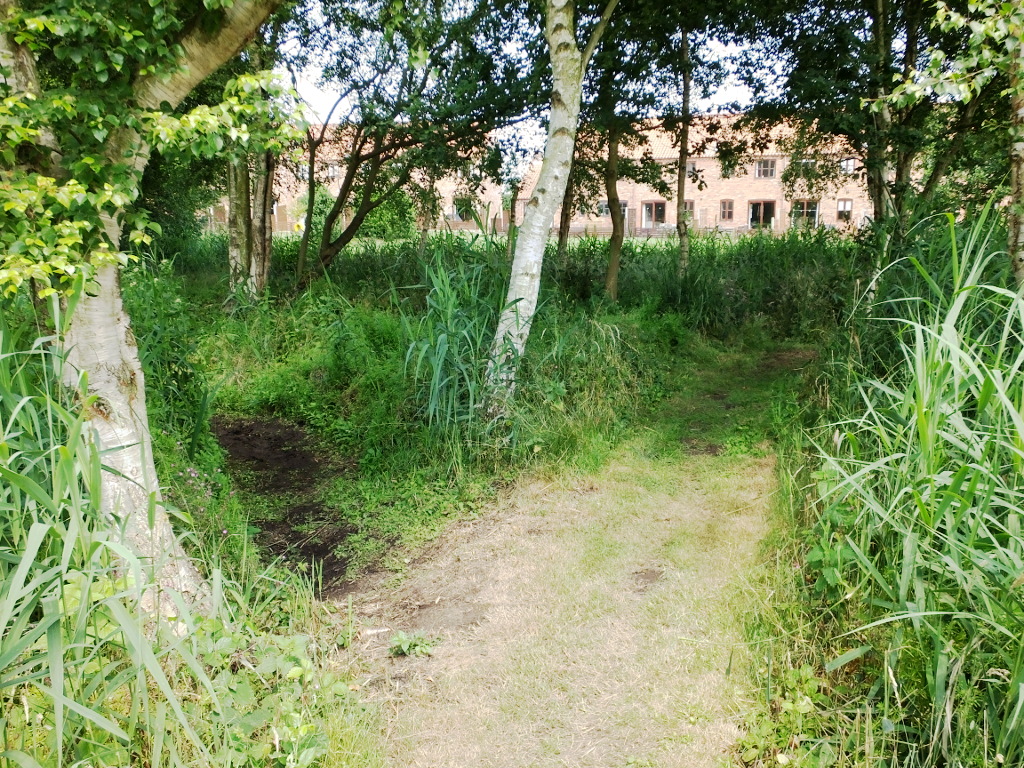 Immediately following the right turn you find a path leading off the the left, but we will continue on the grassy path to the right.

When we took on Ruston House there was no junction here. Instead there was a single path running along the spine of the island with a number of spurs leading off to fishing stands. Our plan has been to create a circular route around the island so you did not have to repeatedly retrace your steps as it seems more attractive to us to make continuous progress on a walk. It was much the same thinking that led to the creation of the New Path already explored. 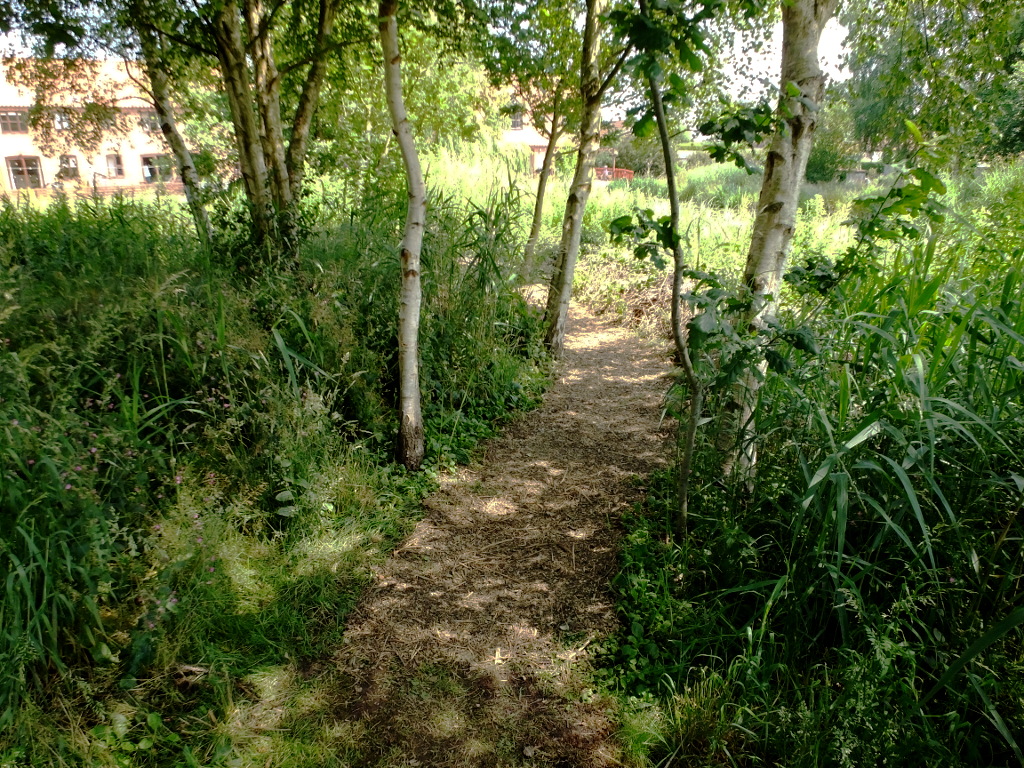 Once a short distance along instead of turning left as the original path had done to stay on the island's highest ground, we take the beginning of the new circular route with a slight turn to the right and a drop to slightly lower ground. Work was begun on the circular path early in the year and this is part of the result.

The chippings, produced when we had a Tree Surgeon come to trim various trees around the site of the planned Cart Shed are freshly laid and designed to help raise and level the path. 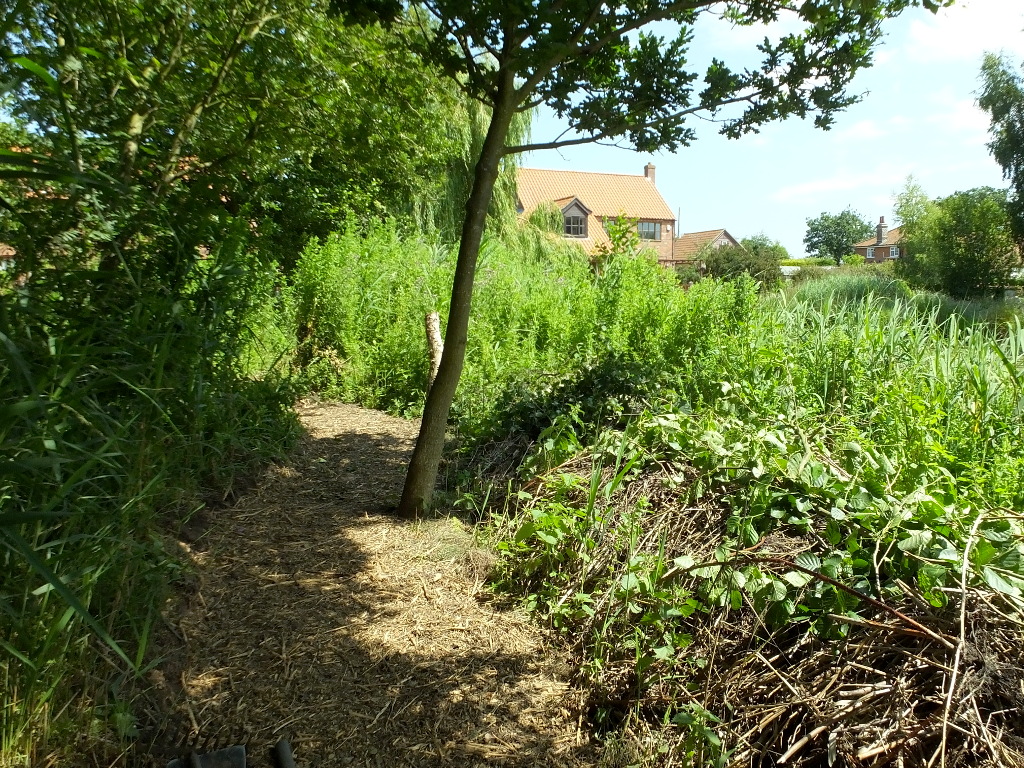 Further along the path we approach an oak and pass what we have been calling the Long Barrow, created last December when the bankside vegetation went through its three yearly cut back as part of a regular cycle of maintenance. 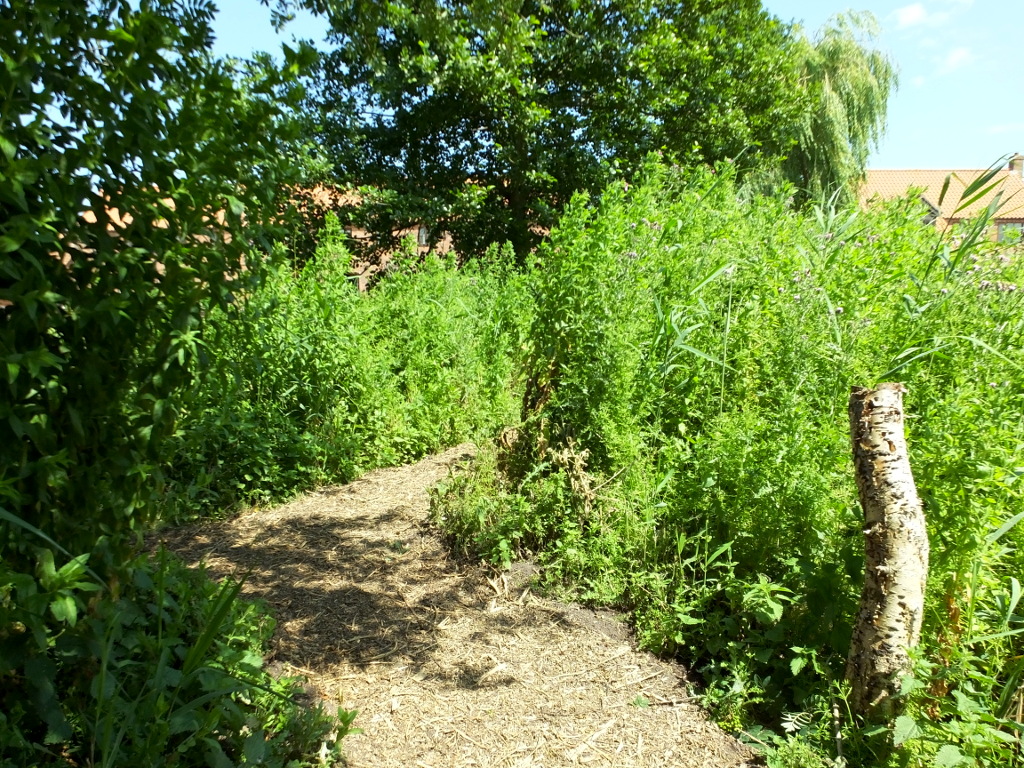 Climbing to slightly higher ground we pass an old birch stump before reaching the junction with what was one of the original spur paths that leads to the Duck House. The main path takes a sharp left turn by the shadows on the chippings. 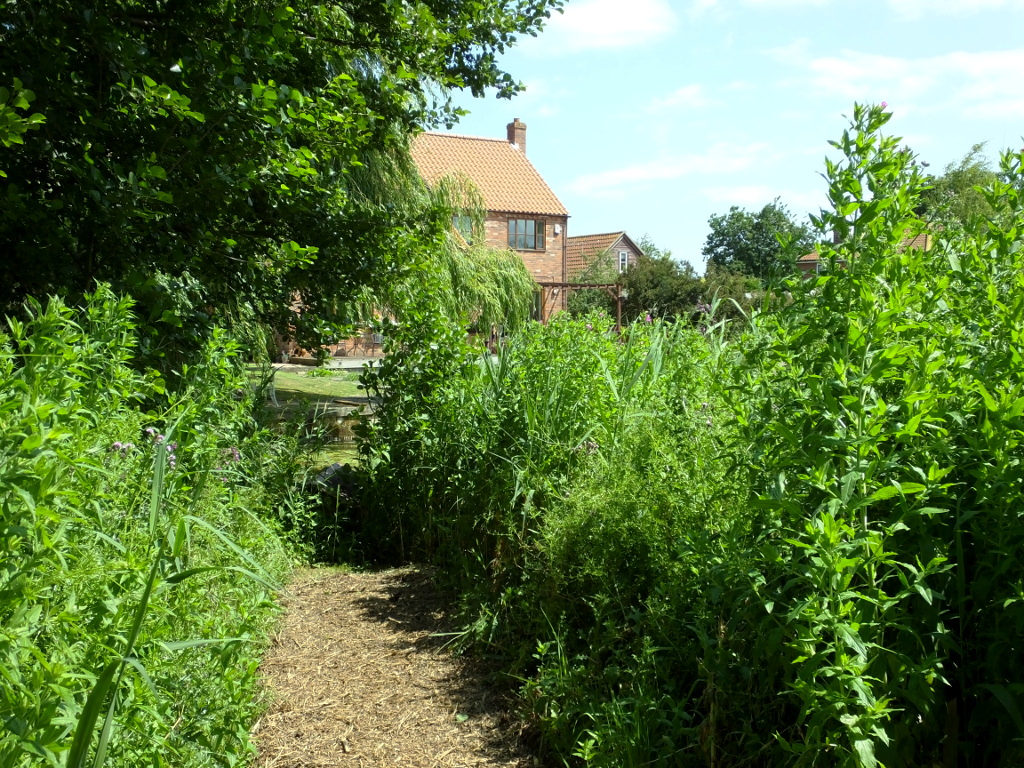 Here we look down the length of the spur. The duck house at the end is in shadow and difficult to see. Returning to the junction as we make the left turn. 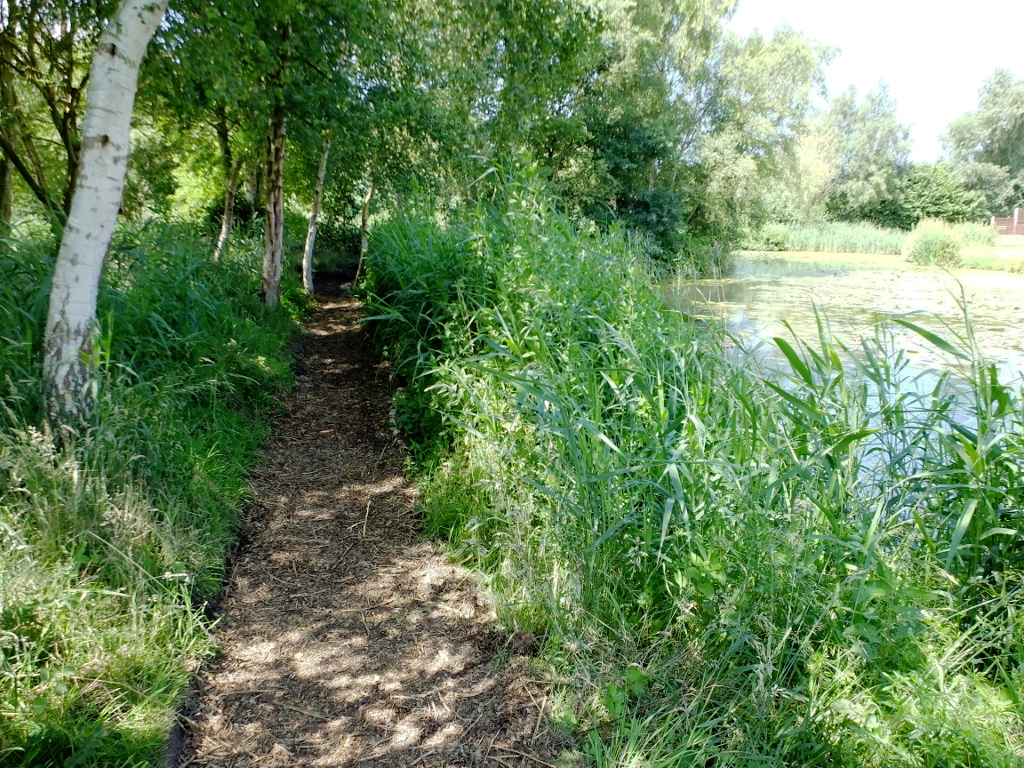 The path falls away to be much closer to the water here. A number of larger birch logs were laid on the ground to help support the soil which has been levelled to form this part of the new circular path. A degree of privacy is maintained as the reed cut back over winter has quickly re-grown to nearly 6ft in height. 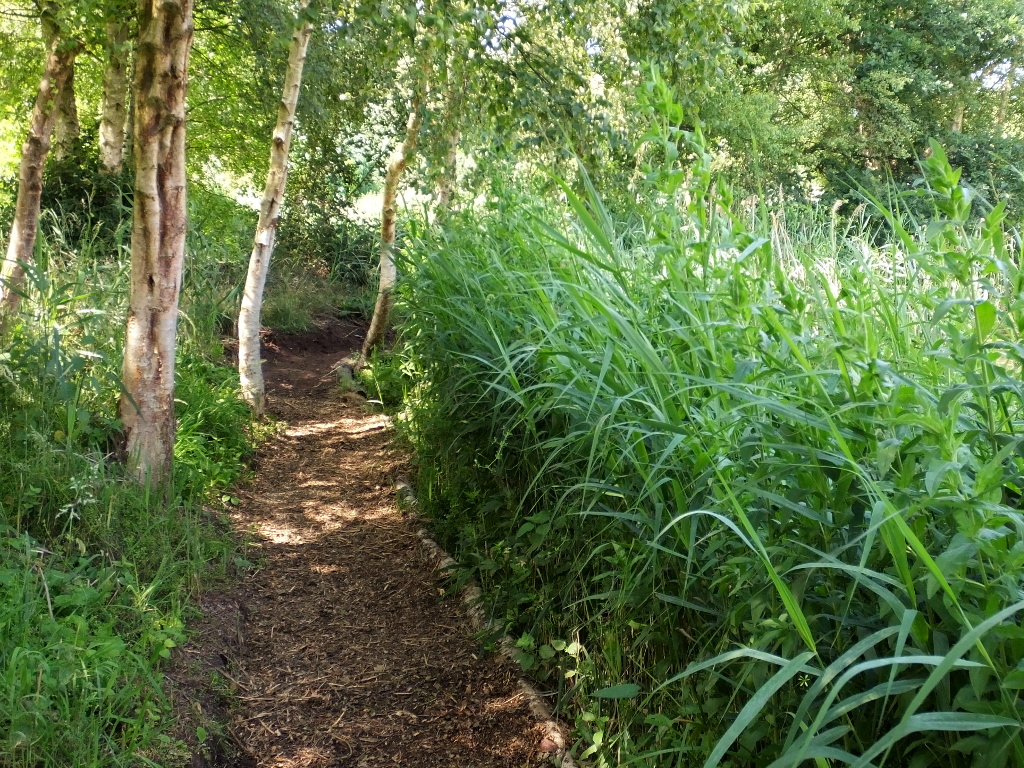 Part way along this stretch the paths rises a little and clambers round the back of a birch which is right on the lake edge. 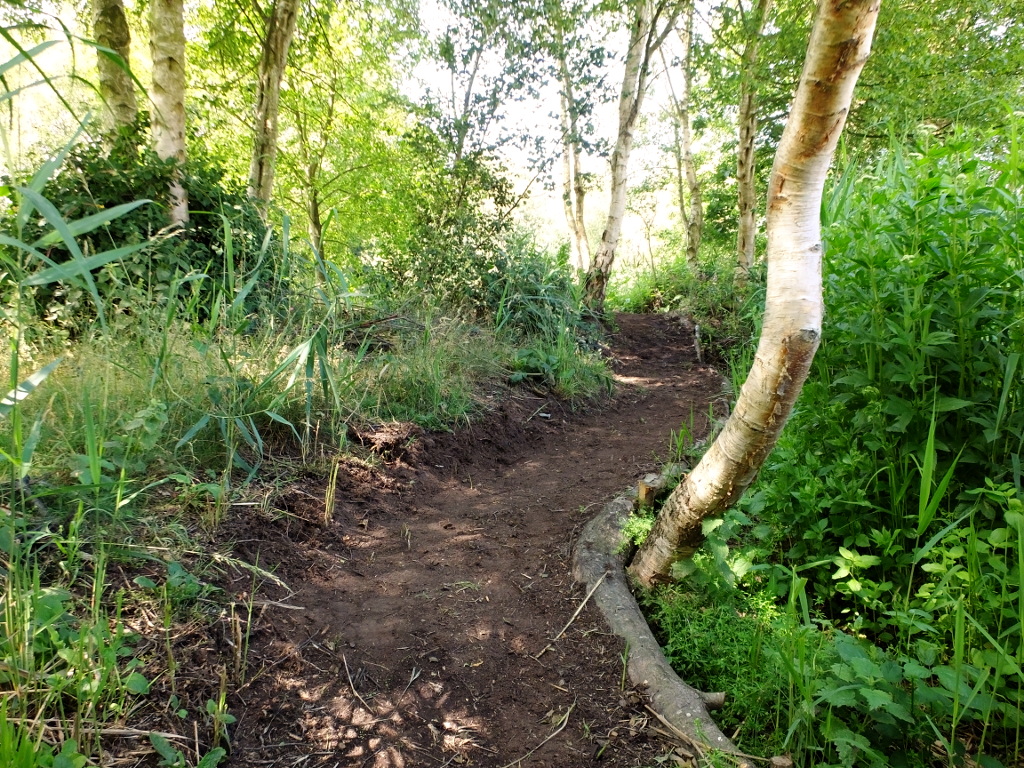 Beyond the lakeside birch the path climbs still higher as it returns to the highest ground on the island. The the path continues to be edged with large logs that support the edge of the path. The ground that has been disturbed to create the level path still has to recover. It is hoped it will grass over in due course. 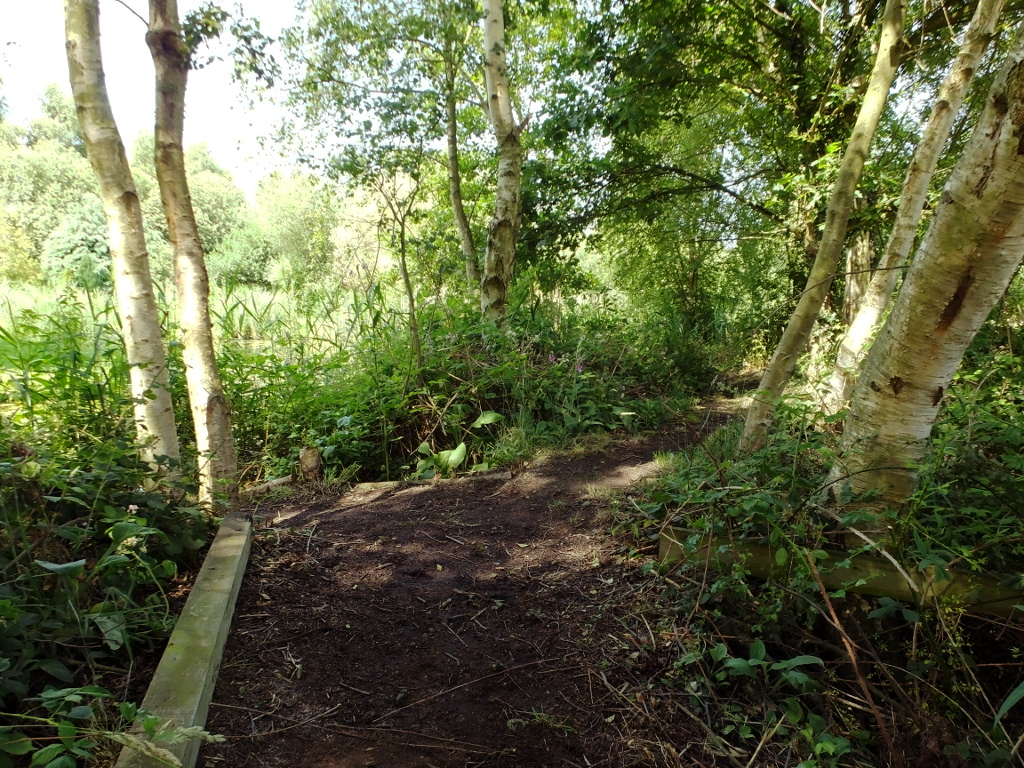 Now at the high point, the circular path leaves to the left just beyond the fence post lying on the ground. The path the the right is also new. It was created over the summer of 2013 and it took several weeks to cut through the vegetation all the way to the northern tip of the island. There had been no need for it for the previous owner, as there were no fishing stands on the island beyond this point. 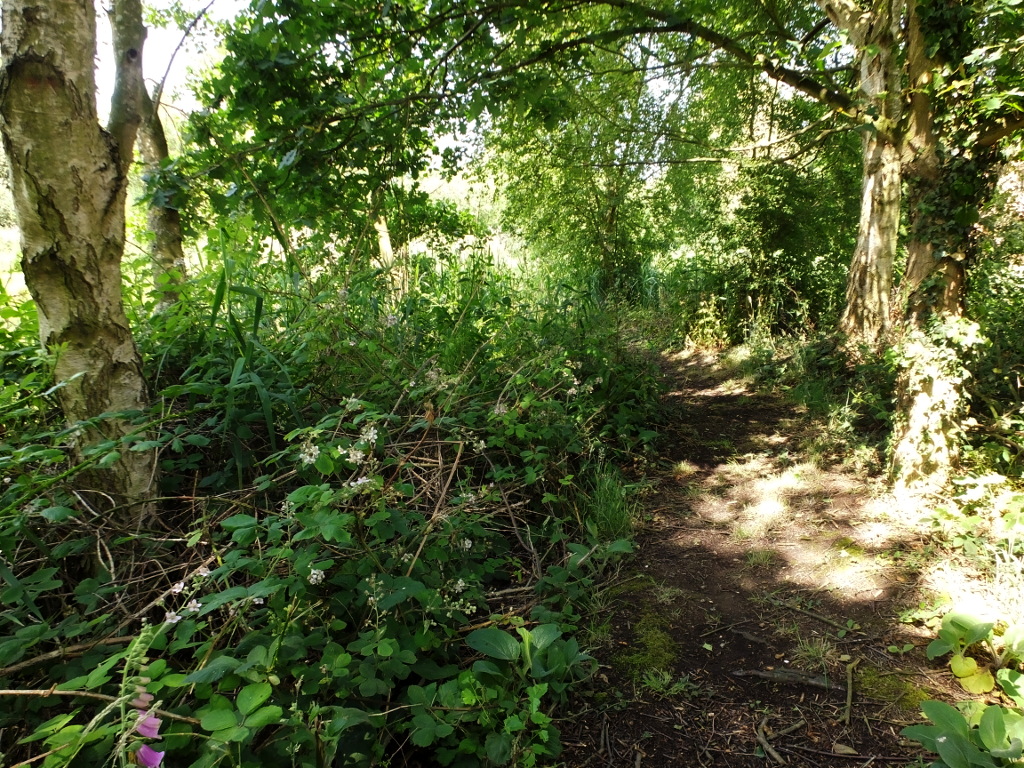 We take the new path towards the far tip of the island. Where the "island Clearances" of the winter has masses of nettle removed, this end of the island was almost entirely devoted to bramble, currently in full flower. 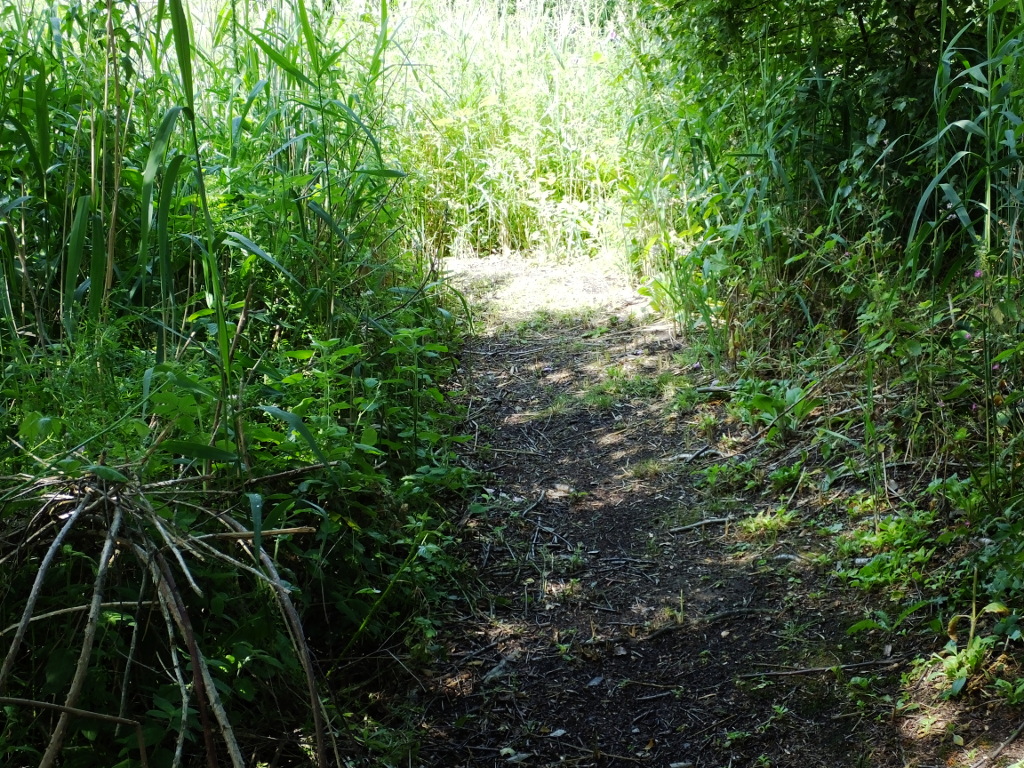 The path runs steadily downwards until the very end where the ground is too damp for trees and reed and hemp agrimony take over. Without the trees it is bathed in sunlight.

To continue the tour, which returns to continue on the rest of the circular path, use the Later Post link below.