I have just spent most of the day doing a lot of chipping.

Back in February the Green Team were tasked with replacing the old log edging to the path just beyond the bridge. Masses of tanalised timber was purchased, as the plan was do do a lot of work on improving the paths over the months before the main work on the lake started.

This section of the path was also to be raised as it is amongst the lowest ground on the site and it can get very soft in winter if there's a lot of traffic on it. We had a variety of bits and pieces of old timber that were to be laid on the existing path to raise it and the work being done on the old reed bed meant we had some spare soil to create a new surface for the path.

Looking back, I see I took no photos of the work they did, save one, whose purpose was to show the Green Team why they might be missing one of their mugs. It was on some of the old timber that was to be buried to form the path's foundation - and that included some of the of the bridge's original balustrade, removed when it was re-decked, just before our wedding. 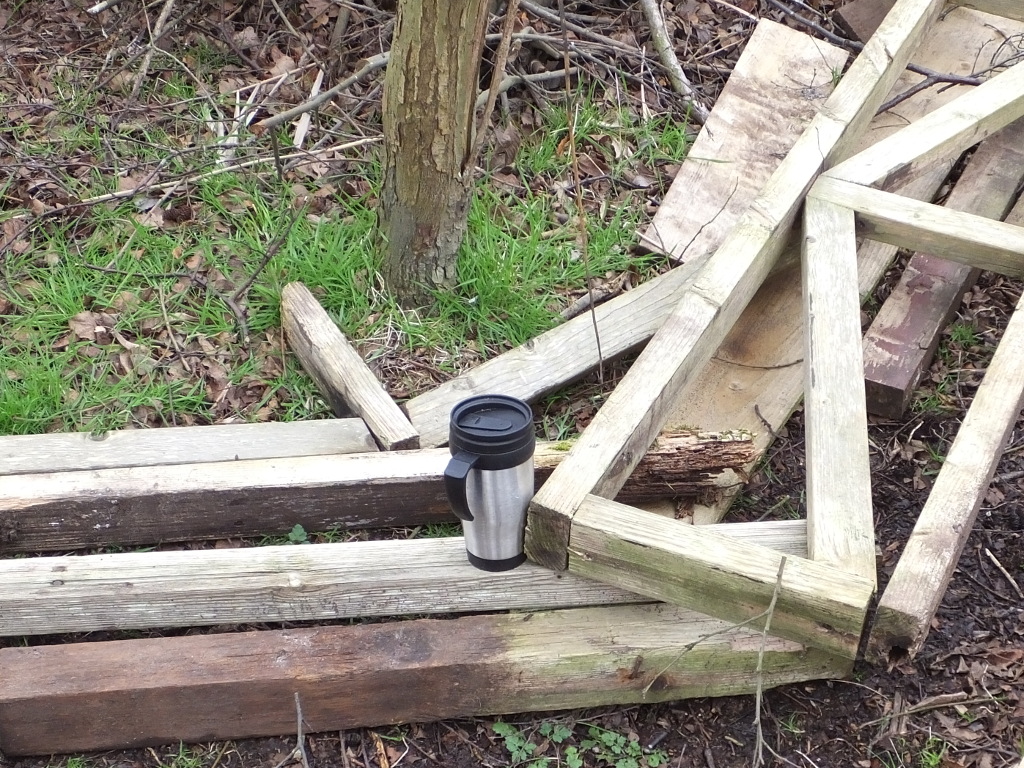 The earliest pictures I have of the raised path can be found at the start of Part Two of the tour of the grounds made in April. There are some  further pictures of the improved path later in that tour as well. But this is what has been done today... 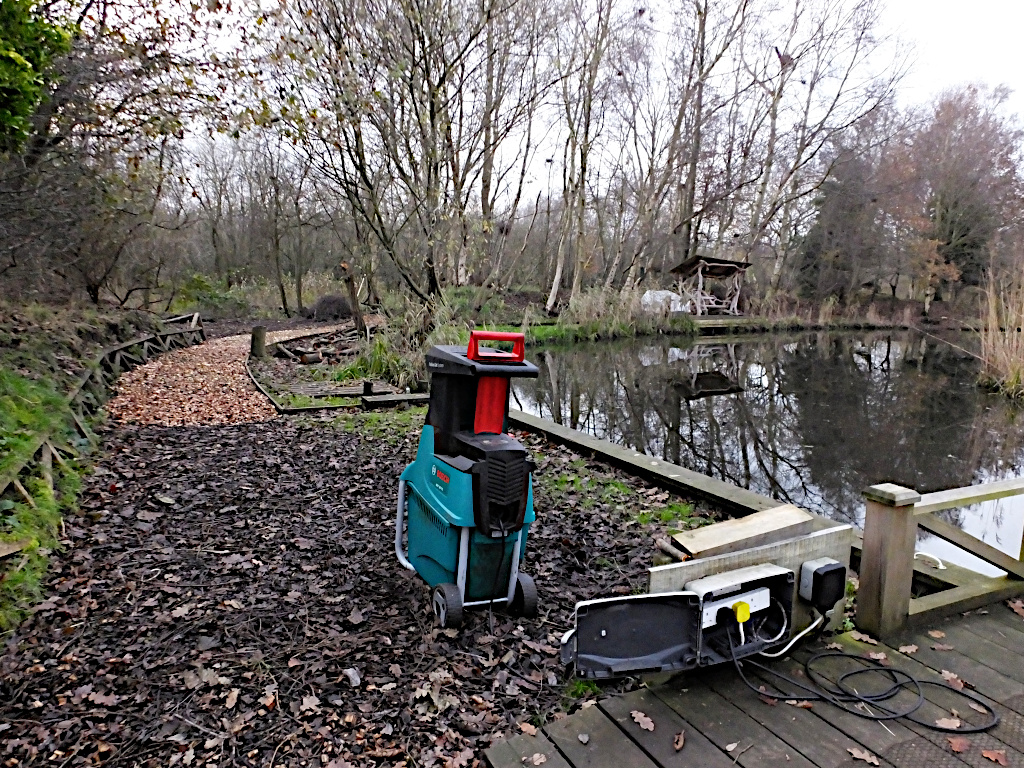 You see the chipper that Diana bought. We drag it down the grounds and plug it into the socket by the bridge. It works really well on wood up to about 30mm in diameter, but proved useless on soft material, such as freshly cut reed and hemp agrimony, which is what we first tried it on and thought we had bought something that would prove an expensive mistake. 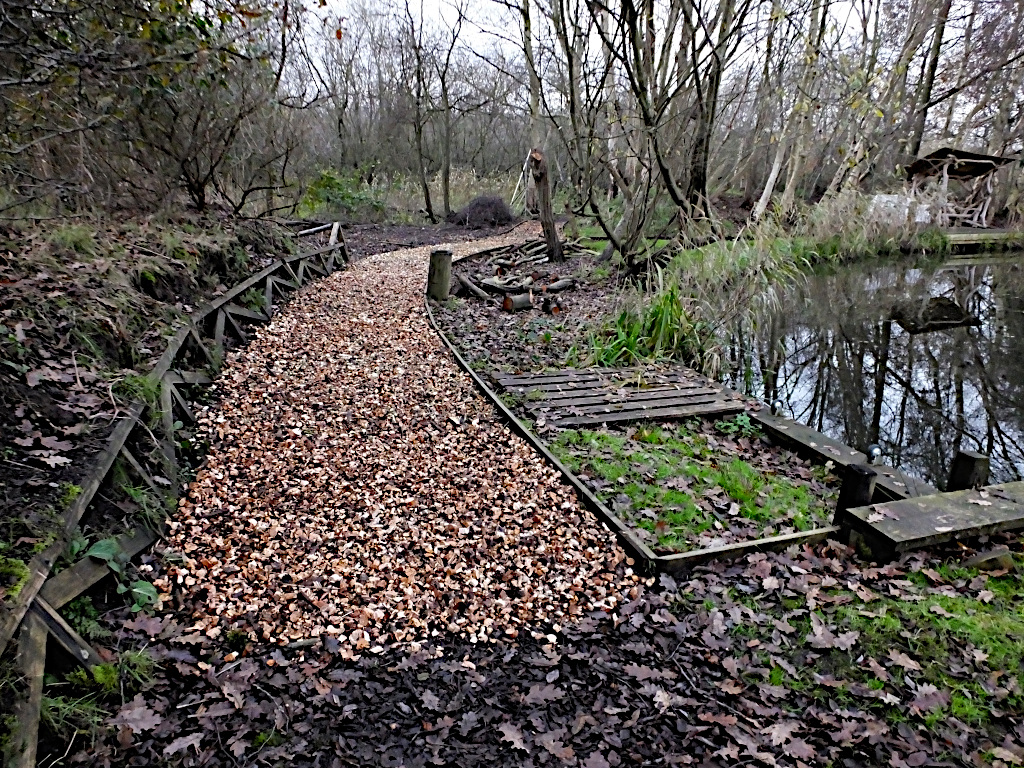 You can see how the Green Team had replaced the logs with the planks they had sourced to edge the path and help build up the level so it would stay a little drier in winter. 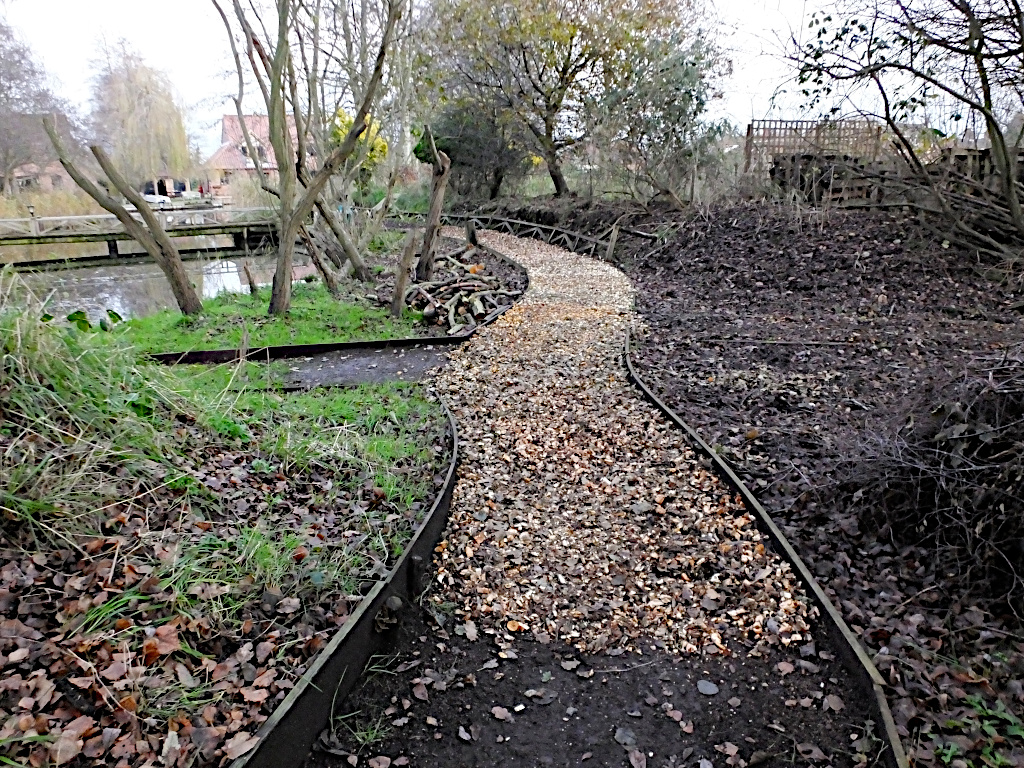 And this is the view from the other end of the length that's had the new chippings placed on it. They stop where the path begins to rise as it passes behind the Ruston Bench.

Over the last couple of months we've been able to clear the whole area to the right of the path of its accumulation of smaller branches. Only a small stack of the finest twigs remain. The branches were chipped and went on the length of path from the house to the bridge as the New Grids Were Laid. The larger branches that you see on the left of the path are what remains of the Storm Damage in September.

And, in case you wondered where all the wood for the new chippings came, it was from the stack that the Green Team had made on the Poor's Allotment just south of the bridge. 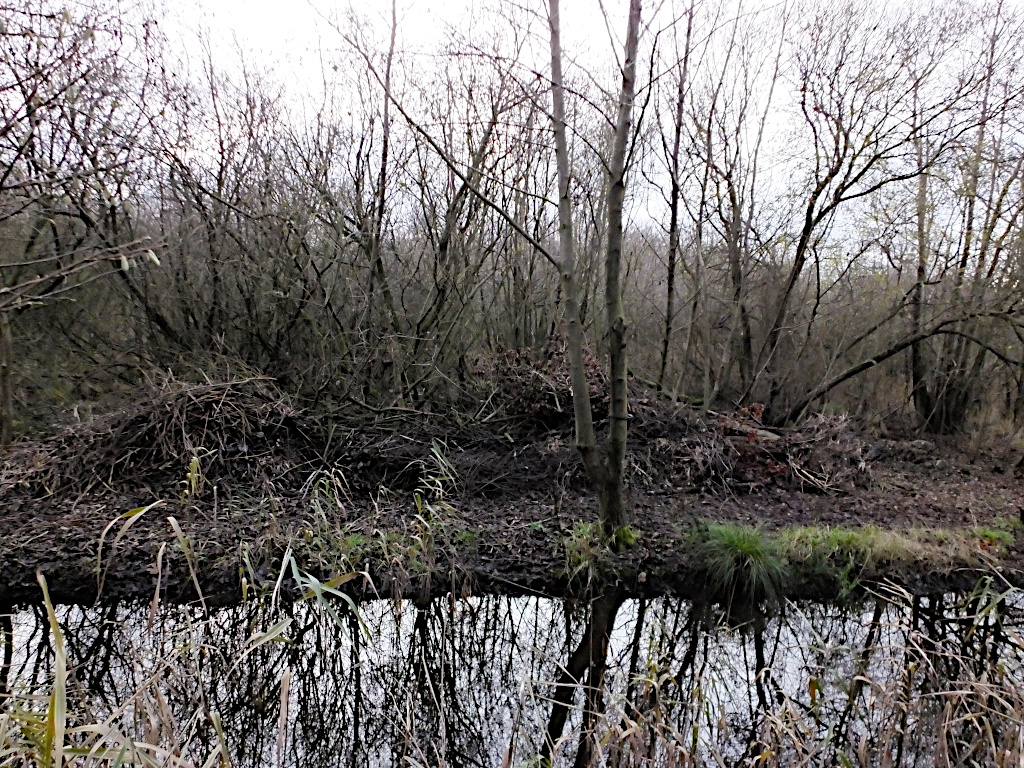 What was originally just the pile of timber felled on the Poor's allotment side of the dyke has grown over the year as other material has been added to it. This was mainly the reed and bank edge vegetation cut back under the Lake Management Plan devised by the Norfolk Wildlife Trust.

The tallest central portion of the mound now has the reed and other cuttings removed, and the chippable timber that was needed extracted. It looks as if there should be plenty more available and that will be used to provide a top surface for the section of path that forms final approach to The Manna - but that area needs a lot of work to raise its level first!