I awoke at 05:30 this morning early disturbed by the geese. That was unusual so I got up to have a look.

It's a puzzle to me why the cottage owners choose to have the grass mown so short right up to the edge of the water as this is known to encourage Canada geese to come ashore and feed on it, especially when the lake edges are shallow and the bank low. There is no reference to geese in the cottage advertisements so those booking the cottages won't think about the implications of the presence of geese. It is bound to lead to some holiday makers complaining about geese droppings given the amount they produce. But enough of that... 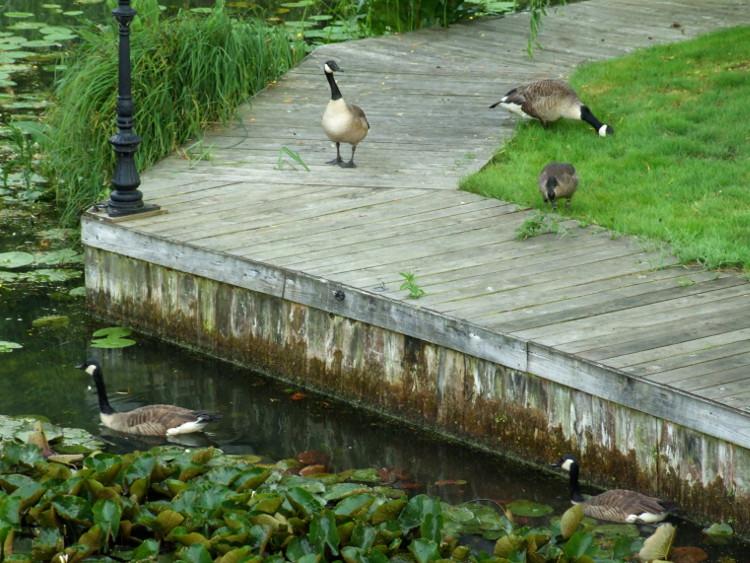 What I saw was a surprise. Our resident family of three were on the "lawn", the one small area of mown grass on what we plan to become "garden", and a further pair were in the water below them. I had to assume this was the same persistent pair that had to be chased off by our residents back in March, at the start of the nesting season.

It was a surprise that the geese were on our lawn at all. I don't recall for sure having seen them there at all and, certainly not since early March. I took my photo and watched for a little longer. What I noticed was that our residents, having made their initial complaint, now seemed to be accepting the newcomers. When I first got to the window I had seen a lunge being made at one of the newcomers, as if to make sure they stayed in the water. But this had stopped. No further lunges were made at them and the newcomers seemed content to stay in the water foraging around the lilies while our family browsed on the grass.

We'll have to see whether this is a permanent return...