A guy from the Environment Agency called some ten days ago. He had been intending to deliver a leaflet to one of the cottages, but had mislaid the address and knocked on our door asking for help.

It gave me the excuse to show him round the place and ask a few questions. During his tour, apart from getting excited about the school of roach he spotted in the lake, he just happened to say "I think that was a Norfolk Hawker", as I saw a large brown dragonfly out of the corner of my eye.

Last Sunday I managed to get a blurry photograph which I think was sufficient for a positive identification, but I didn't think good enough for this blog. Today was different. Just to be sure I posted my images on iSpot and, sure enough got a couple of identifications back which confirmed what I had hoped. 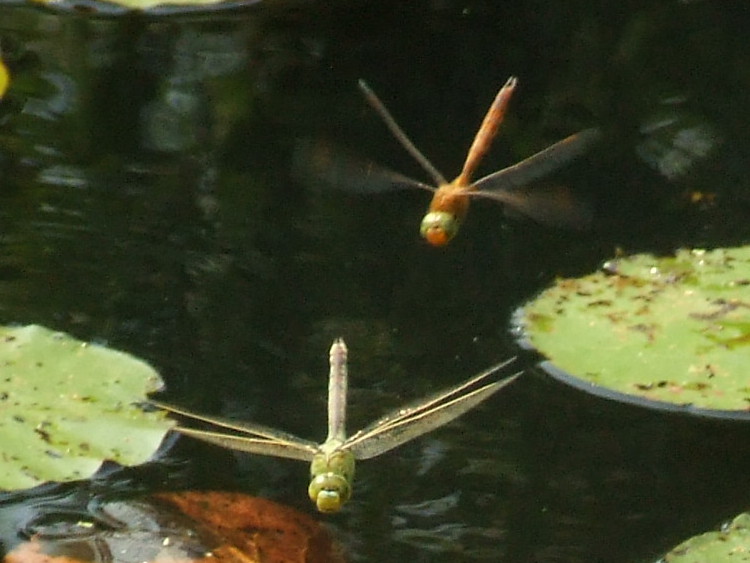 The first image was confirmed as a Norfolk Hawker behind a female Emperor Dragonfly. There must have been half a dozen different dragonflies over the lake behind the house. Some kept flying fairly low, but the Norfolk Hawkers would circle quite widely climbing to 12-15 feet above the ground They also seemed to be quite aggressive, as if they were defending territory. 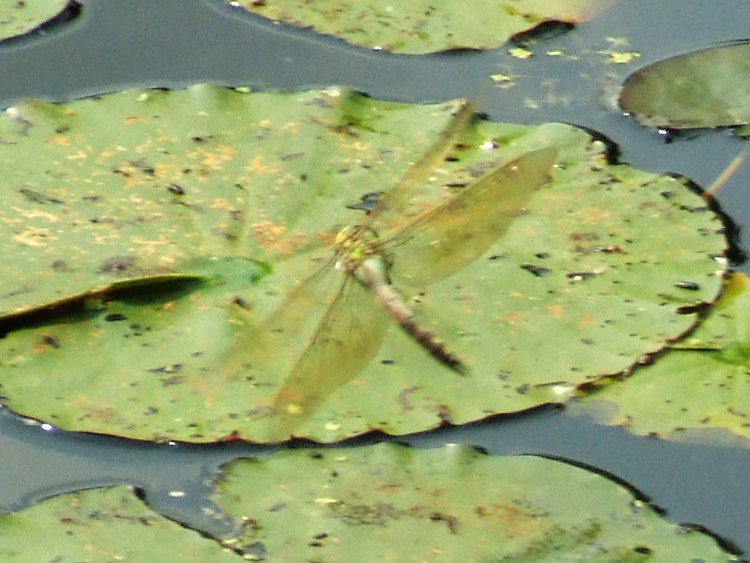 It was a warm sunny morning and I didn't notice any of the larger dragonflies land in the fifteen minutes I was taking the photographs, although the slightly smaller Four Spotted Chasers did land - always right on the edge of the decking or over the gaps in the vertical planks in the quay heading. 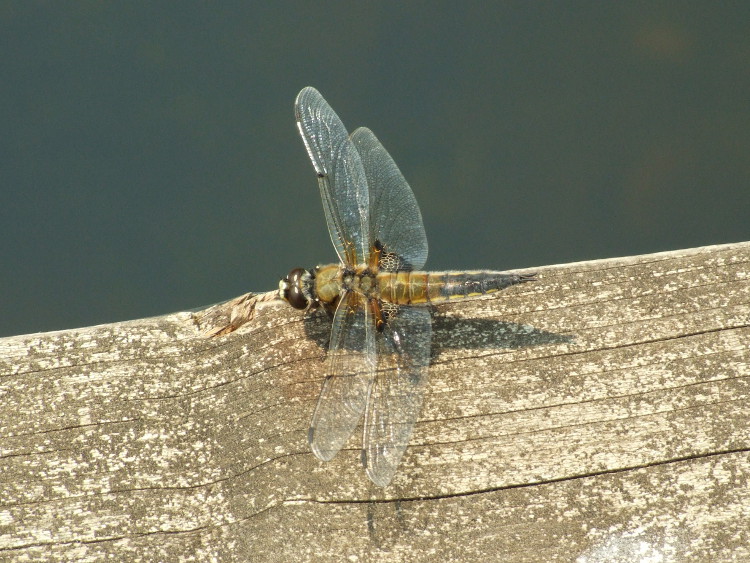 I would have expected to see them land at some point, either to rest amongst the iris or grass on the bank nearby. That might have allowed me to get some better, less blurred, images to confirm identification. 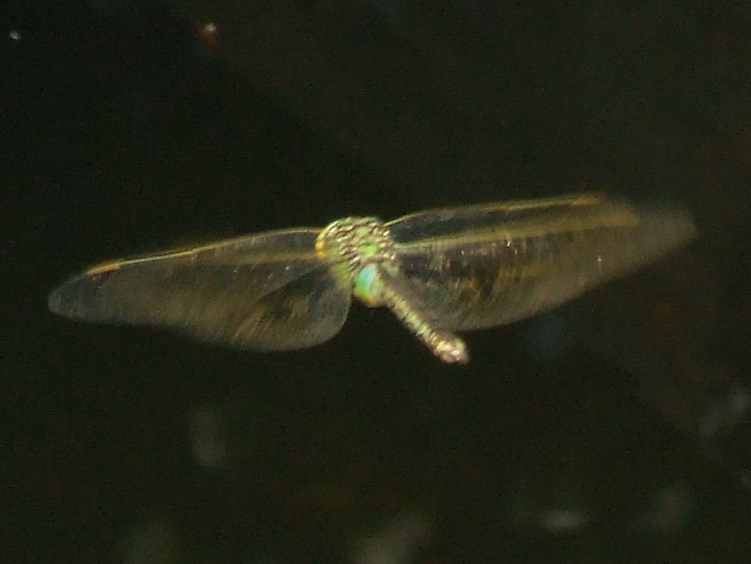 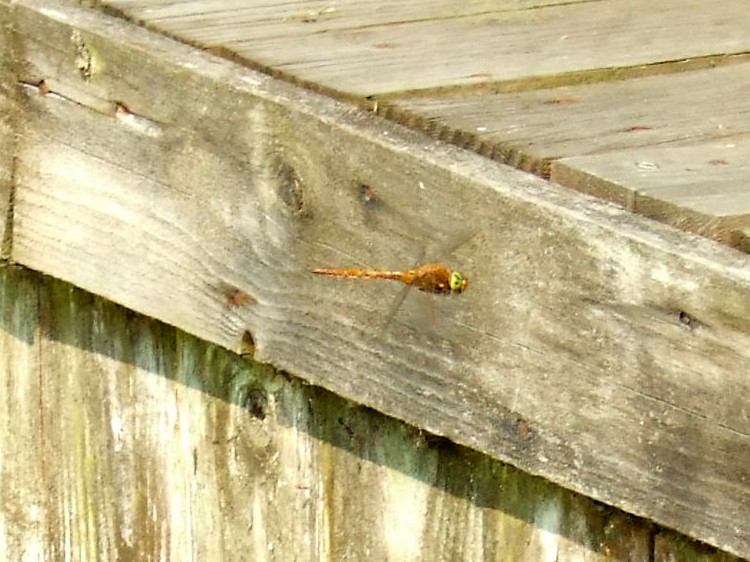 It wasn't until I came to make this post that I found in the corner of one of the frames from which these other images were taken that I found evidence that the larger dragonflies were landing. It appears to be laying its eggs: 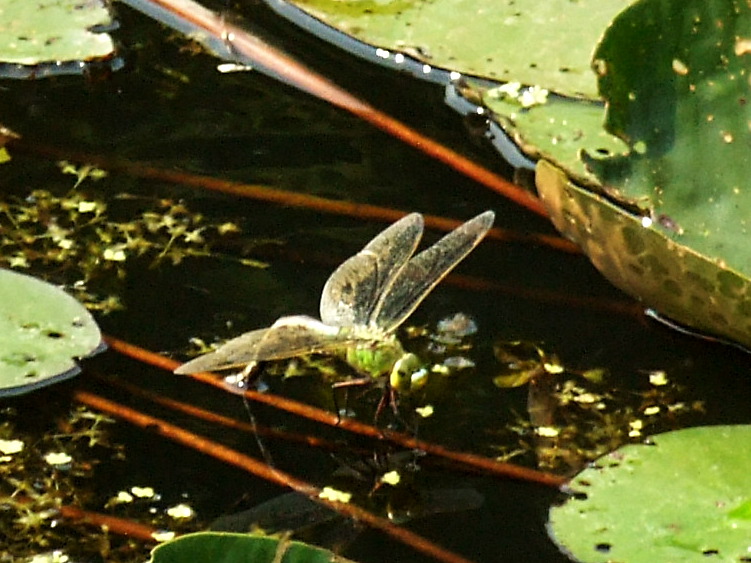 In addition to the images I saw at least one iridescent blue dragonfly present of similar size (2.5-3" in length). As a result of the iSpot answers I now can be fairly certain this would have been a male Emperor. I might have tried harder to photograph one, but when taking the photographs I was only concerned to see if there were Norfolk Hawkers present as these are quite rare. Some web sites suggest that their location should be officially reported when they are spotted.