Dragonflies Still About - As Is Weed!

I was surprised to see a Common Darter shortly after midday. I had just completed a tour of the grounds, first going round the lake behind the cottages next door and ending up on the island, which is where I found one waiting to be photographed. 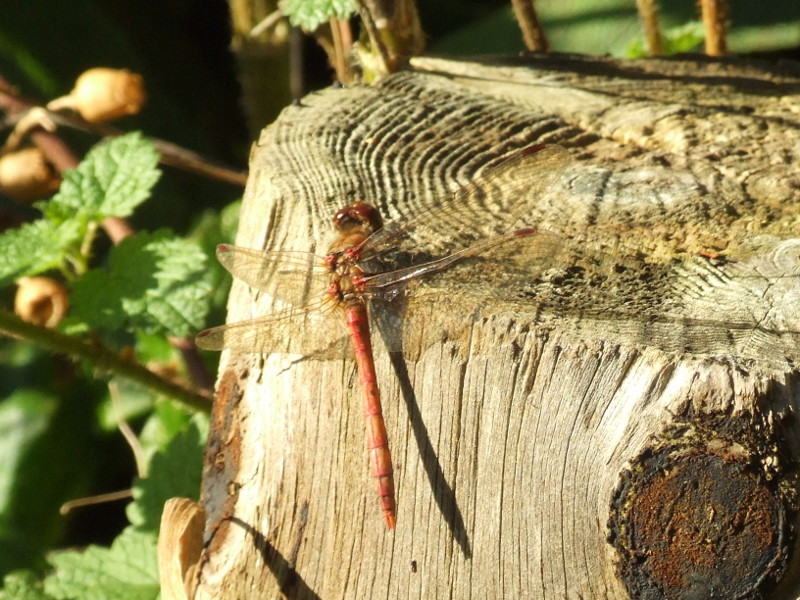 As it was a bright sunny day, my first photograph of the day had been my traditional lake view from our bedroom window. This time I took it shortly before 10:30. By the end of the day I had spent some time on lake clearance, but more of that later. 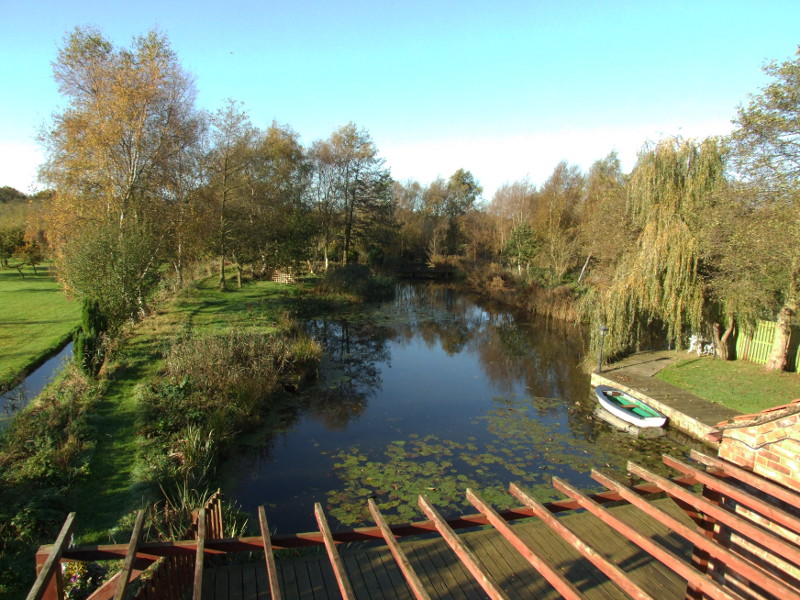 It was around 11:45 when I started my tour of the grounds that led to the encounter with the dragonfly. What prompted me was the state of weed on the lake behind the cottages. I'm no angler, but I am sure that this much weed is not a good thing. I felt that some record of the volume of weed was needed. There's been far more on the lake in this our second year compared with our first in 2013. I've not been keeping a track of the weather but I do know that water levels in the lake this year have been much higher than last and I do wonder if this has been a factor in its profusion. 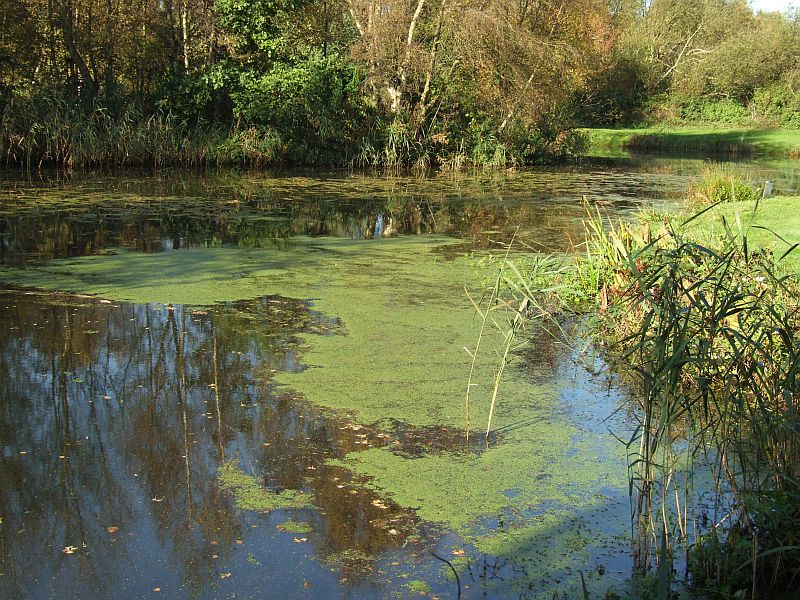 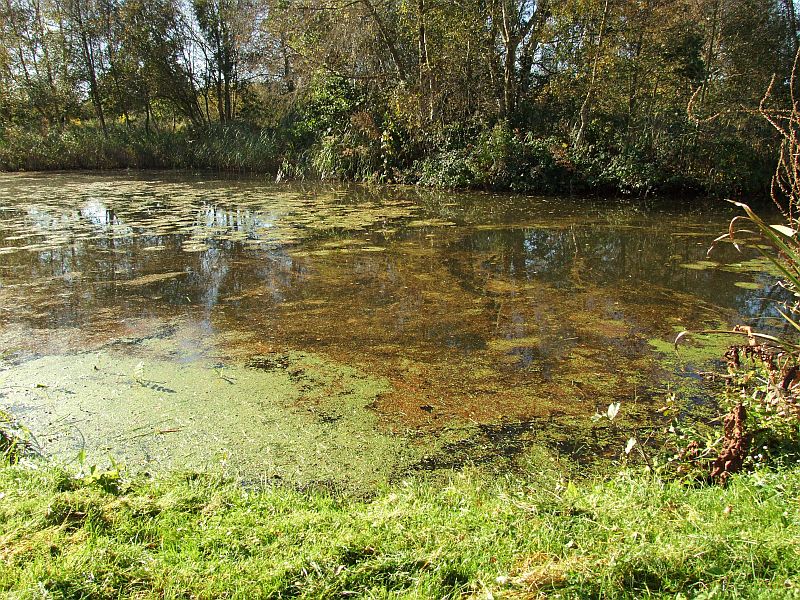 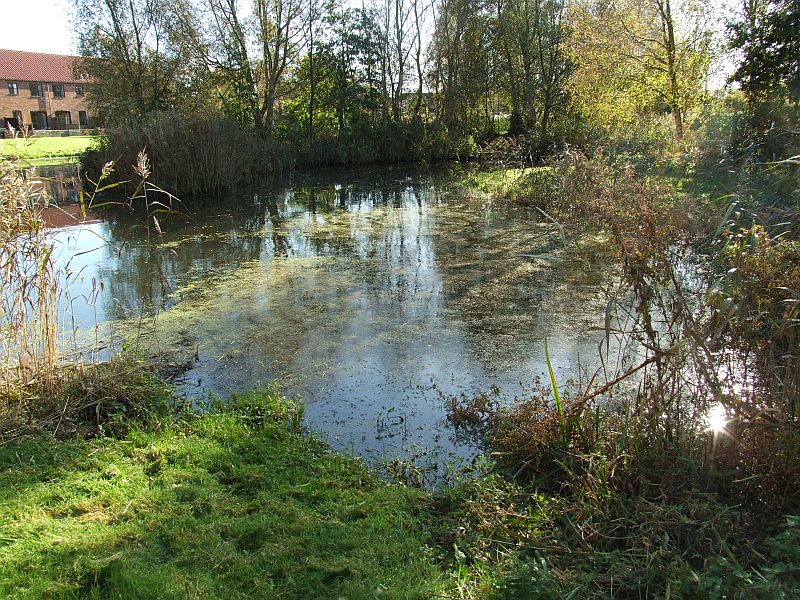 When I talk with the groundsman who maintains the lake for the cottage owners I hear conflicting stories, sometimes being told that the weed generates oxygen for the fish and sometimes an acceptance that the lake needs clearing out, although normally only a small hole is suggested which, when I'm in a good mood, conjures in my mind the cartoons of penguins fishing by dropping a line through a hole in pack ice, but most of the time just leaves me confused with the apparent inconsistency of the responses.

I really need to find out what varieties of plant do help oxygenate water and what is needed by anglers. In my first year, when there was less weed about, there was much talk of "cabbage" the large soft floppy leaves that are associated with the lilies being a bad thing, but all talk of that seems to have gone this year - perhaps because you can't see it for the thick weed on the surface.

I am not certainly convinced the massive expansion of the weed in the lake during the summer and through into autumn is either good for fish or from a visual point of view. I am unsure if there is benefit in a lot of lily cover on the surface and "cabbage" below, nor about allowing reed to extend right across parts of the lake.

The one thing I am convinced about is that the cottage owners need to take advice and make some decisions on exactly what the function of the lake should be and how best to maintain it for that purpose. Currently there seems a mix of views. Some would, ideally, want to retain a "fishing lake" although the regular visits by otters would appear to make that impractical. Others don't want to risk losing the angling fraternity by heavily revising the way the site is promoted. Still others take the view that the arrangement with St George's Fishery is the answer that issue and would be happy to change the promotion of the site to one that concentrates on the wonderful views and wildlife features of the venue and the local common, which certainly do set it apart from any other holiday complex.

But enough of all that! I continued my walk and took a photograph of a felled tree, close to the dyke at the back of our plot. It's another that has fallen in recent winds. We've been negotiating with some folk who should help us with maintenance work over the winter and one of their tasks will be to clear dead tress and fell others, particularly birch, that grow ever upwards in search of light leaving very weak spindly trunks, reducing light levels at ground level, reducing the range of habitat left underneath. They are due to start next week. 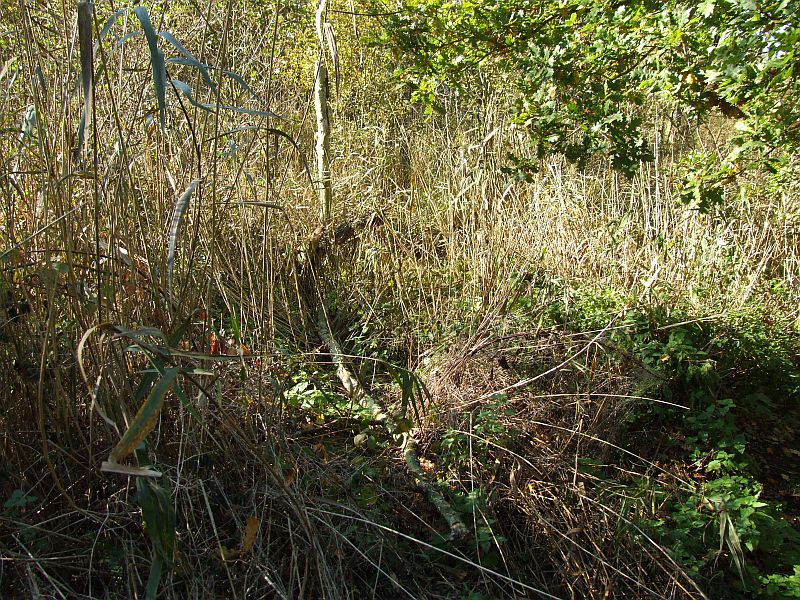 Returning to the subject of weed again, back on 16 October I made a comment about the similarity between the lake views taken on the 10th and 15th of the month. Looking again at them I see that they show more than a higher water level in the dyke and a boat turned in another direction. I realise that along the left bank there is a marked increase in weed between the two dates. (Though it is difficult to make out without enlarging the images). 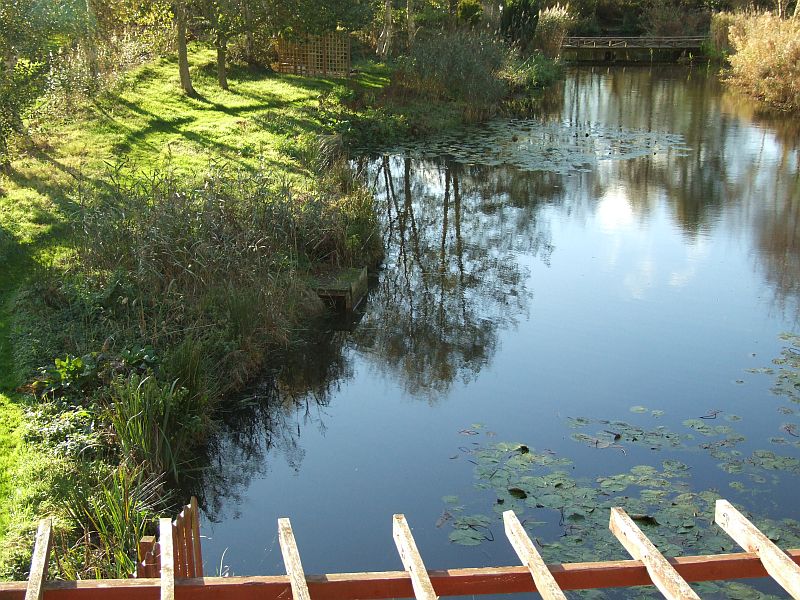 This morning's image also shows weed all along the left bank and so after my walk round the grounds I cast off the dinghy and spent a couple of hours clearing it and the results can be seen in my final photo of the day.