Around the Grounds and Behind the Lake

As it was a bright sunny day, and fearing that the weather may not last, I thought it was a good idea to take a stroll around the grounds. I set out from the house going anti-clockwise round the lake. It looked splendid in the sunlight, with the still surface reflecting the trees on the island. The trees themselves still have the last of their leaves still hanging on them. 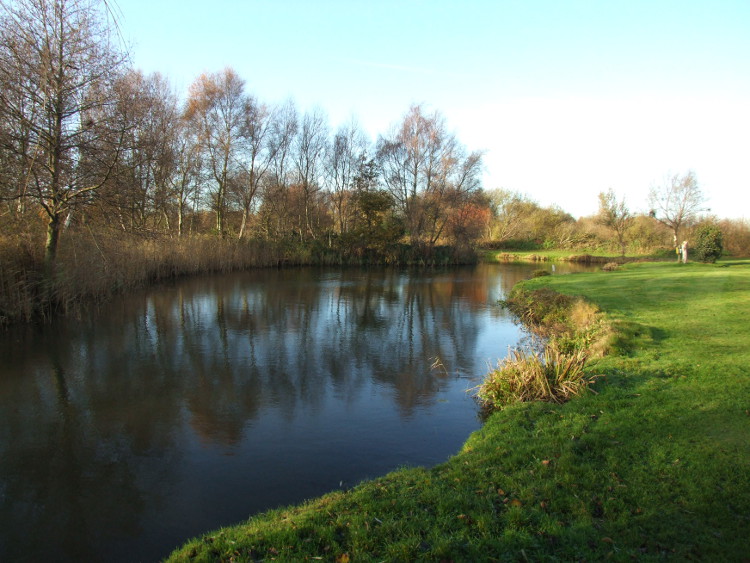 Walking on, and nearing the furthest of the cottages you come to three holly bushes. Their glossy leaves, enhanced by the reasonable crop of berries, gave them a wonderfully healthy appearance. 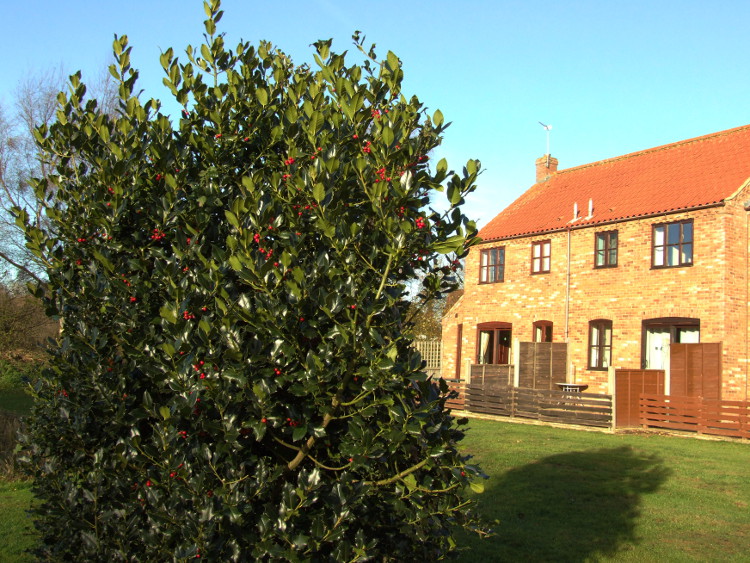 In contrast, once through the gate and back the house's private grounds, you come to the bush where, back in August, I found a host of Peacock butterflies. Now the vegetation is dying back and the area looks quite forlorn. The butterflies are, of course, long gone too. 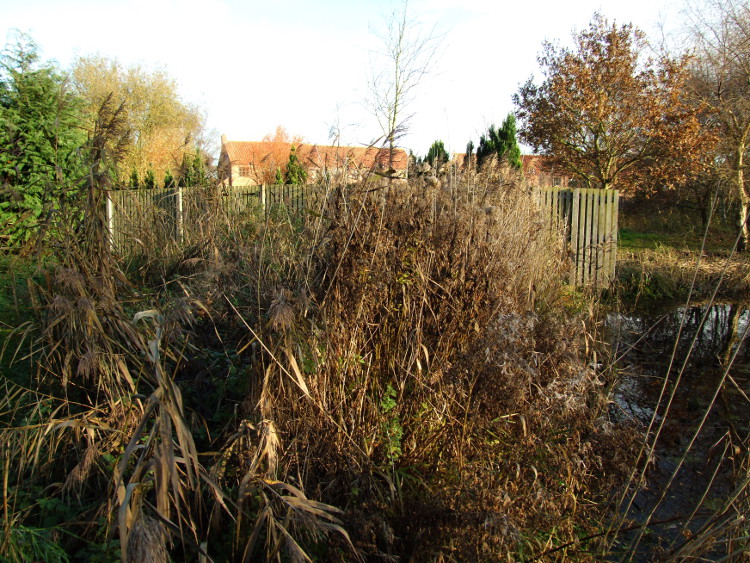 Moving on, the path round the lake begins to be cut into the spoil removed when the lakes were dug out of the peat and forms large mounds a little way back from the lake edge. What, during the summer, had appeared as reasonably vertical brown cliffs with a lack of vegetation now seem to have been systematically attacked by some creature. The top parts of the exposed soil appear to have the beginnings of burrows in them. Below this, the loosened soil has fallen away and spread across the path in a gentle slope.

I was unsure what might have caused this. No burrow seemed to have been dug very far into the bank and there were so many abandoned burrows that it seemed unlikely that they were burrows at all, rather it was some creature foraging for seeds or roots of some kind.

The best theory I have come up with occurred to me moments after taking the two pictures. I encountered a male and two female pheasants that were patrolling the path and pecking at the ground. I strongly suspect it is they that have made a mess of the embankments and not the moles or other creatures that had first come to my mind.

It was as I turned the corner to explore my new path through this wilderness area beyond the back of the lake that I found the pheasants. They scattered immediately giving me a chance to examine the ground that they had abandoned. 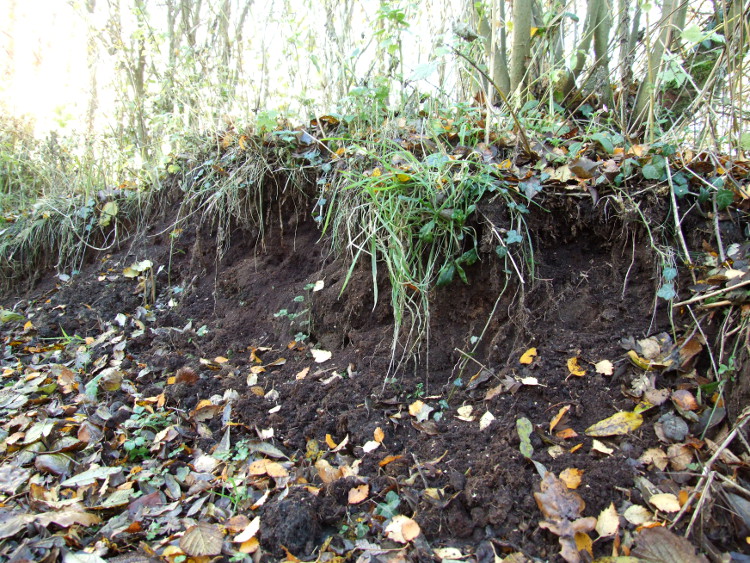 Before I got to look at the ground on the new path closely, I noticed that not all the path-edge embankments seem to have been attacked in the same way. On the main path, close to where the new path turns off towards the dyke that forms the boundary at the rear of grounds, you can see that, at least on this stretch a vertical edge survives. 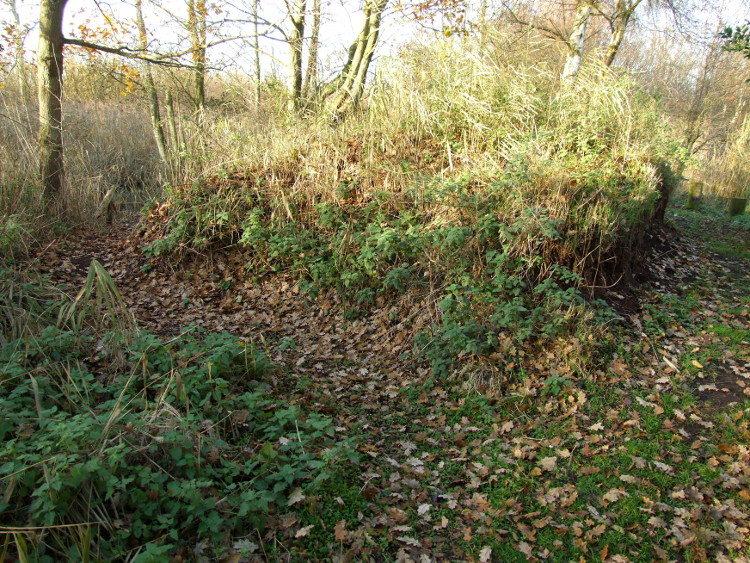 Once looking at the ground all I noticed were the remains of the acorns, which had appeared there in profusion back in October, soon after the path was first created. Back then there were no leaves on the ground and the acorns were obvious. Now you had to look more closely between the leaves. There are even few remnants of the outer layers of an acorn, along with the many cups in which the acorns form. 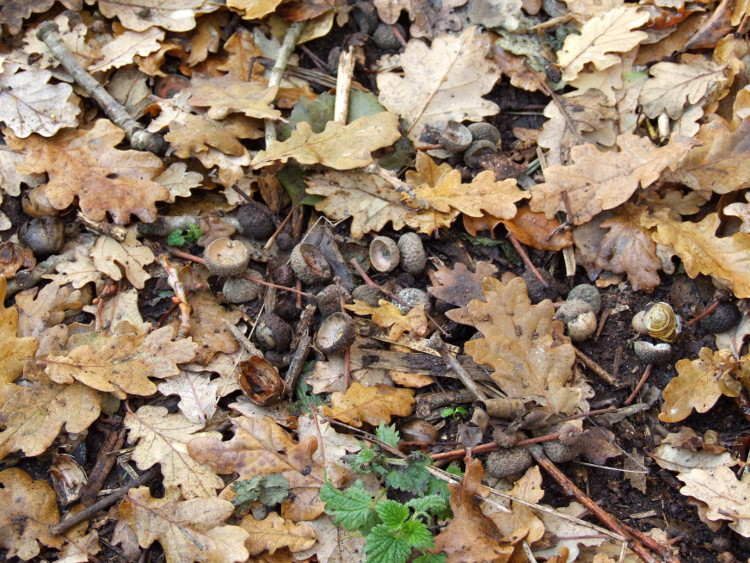 I'm still to decide what I should do about the eroded embankments and still got to complete the new path. Should I attempt to cut back the embankments to re-form a vertical edge everywhere. I fear that will just lead to an ever widening path, something I don't want. As for the new path, currently, that still leads to a dead end. I plan to cut back a number of more substantial trees where it ends, near the small triangular island in the north-west corner of the site. Then I should be able to link it back to the main path further along, so one can walk a circular route, but that will require cutting heavily into the embankment to match the level of the original path and is a task that can wait till spring.