A "Motor of Swans"

It was around 19:20. We were relaxing, with drinks to hand on the small table on patio, taking in the view of the lake, thinking that we definitely had made the right choice in moving to Ruston House, when we both became aware of noise we couldn't identify.

It sounded a bit like a distant outboard motor on a small day boat. It was a steady multi-pitched drone, overlaid with a continual splashing sound but, somehow, without the buzz of an internal combustion engine. The puzzle was that it clearly wasn't a distant sound. It was almost alongside us just a few yards away. I went to investigate.

Stepping off the patio and a few yards along the the grass pathway that I mow around the lake I came to the point closest to the dyke separating our property from the neighbours. I was now right alongside the noise. I stepped through the long grass to stare into the dyke. 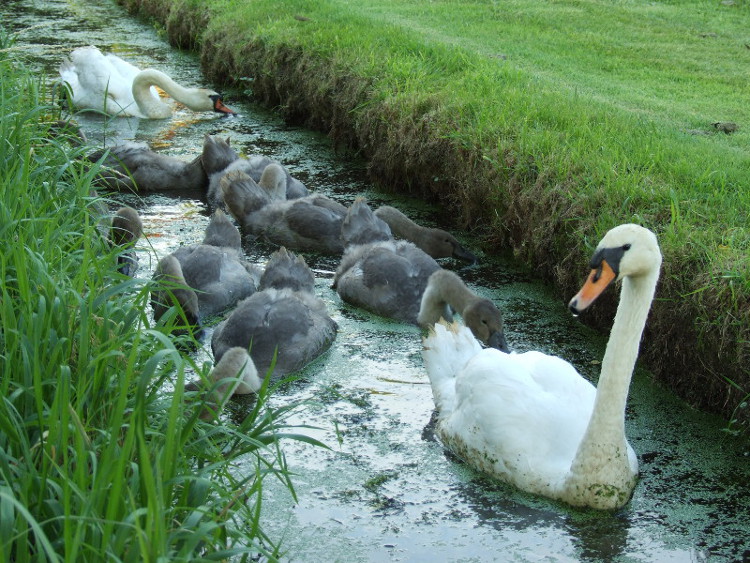 There I found a family of nine Swans. All of them lower beak in the water scooping up the duck weed on the surface. As they got a mouthful they would then chomp on the weed. With all of them doing it an once the sound was like an aquatic purr. And as with a cat's purr, when you can't tell if it is breathing in or out, so you couldn't tell when one bird was making a noise and another took over.

They were certainly enjoying the meal the duckweed was giving them. Yards of the green covering seemed to be disappearing. I returned to my drink, but the noise continued for several minutes more gradually moving further down the dyke until it either stopped or the swans had moved so far down the dyke that we couldn't hear them any more.

Can I claim a new collective name for swans feeding together? A "Motor of Swans" did seem to capture it just right!