A Heron Inspects the Lake

Once again work on the house seems to have taken over and I've found little time to take my camera round the grounds to see what has changed and what new there is to see. Saturdays are normally offer a chance to have a lie in - no builders due to arrive - so I try to stay in bed longer than usual. Nevertheless, still with no curtains at the windows, it can be difficult to sleep on days with a clear blue sky. Today was one such day.

I got out of bed just after 07:30, scanned the view from the window, and exclaimed "Heron!". It was the first I had seen from the house on the ground. I had seen one or two passing overhead a couple of times and assumed they were heading to the larger lakes to the north of Ruston Reaches. Diana came to look too. The bird stood on the edge of the furthest fishing platform visible from the bedroom, the one where I had found the pike's head.

After a few minutes I went to fetch my camera from downstairs. I wasn't optimistic about getting a good result as the bird was almost 100 yards away, but was pleased to find it still perched on the edge of the platform on my return. I considered using my tripod, but was worried that the bird might take flight before I had things ready. It was, in any case, going to be tricky working inside the bedroom while holding the window open, so I only attempted hand-held shots. At maximum zoom it was always going to be difficult to get a crisp well-focussed shot but, as is usual for a heron, it stood remarkable still only moving its head every few seconds. 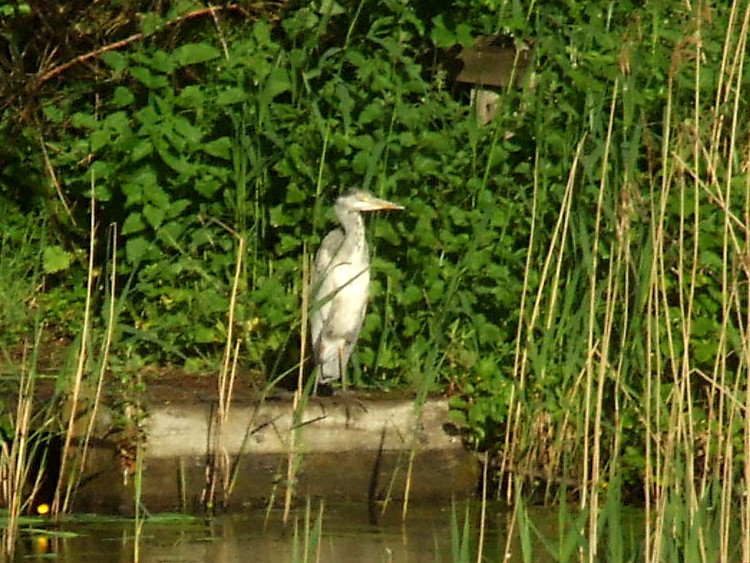 After taking several shots and deciding I'd get none better, I thought it worthwhile attempting to get closer. I pulled on some clothes and went downstairs. It was now after eight o' clock so the bird had been there at least half an hour and at no point had we seen it make a dive for a fish. Whether it had finally concluded that there was nothing appetizing in the lake or whether it was me coming into view round the corner of the house, but the moment I appeared the heron took flight.

While talking birds, I did spot a kingfisher from the bedroom window the other day. All I saw was a flash of the distinctive iridescent blue on the back of the bird as it flew away from me down towards the bridge, so I had no chance to get a photograph. The previous owner of Ruston House used to show us a blurry photograph of a kingfisher on the decking at the back of the house, taken through the patio doors and I was optimistic that we would see them. I plan to rig up some perches near the house in the hope that a kingfisher will use one and that I can get a decent close-up to put on the blog.