It was just before 19:50. We were watching TV in the lounge when something outside caught my eye. "It's a fox!", I cried digging Diana in the ribs with my elbow, and dashed to the office where I'd left my camera. Fearing it would soon make a dash for it I took a quick picture from through the patio doors before going upstairs where I hoped to get better pictures. 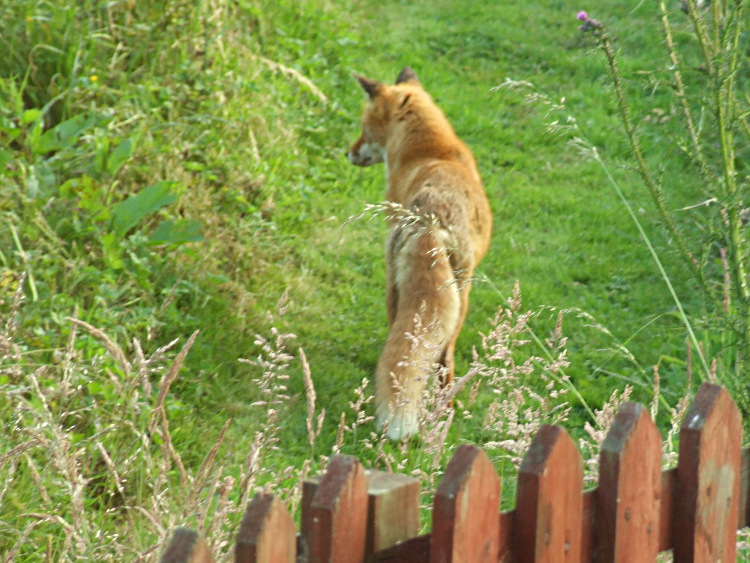 Forty seconds later I was upstairs at our bedroom window and the fox was ambling slowly away along our grass path that runs beside the lake. 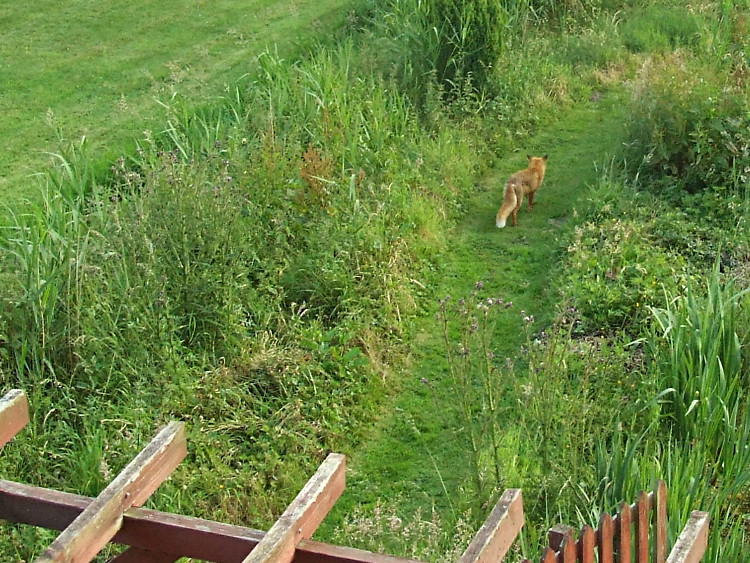 He's in no rush and its more than three minutes later before he turns left to take "The High Road" behind our New Arbour Seat. 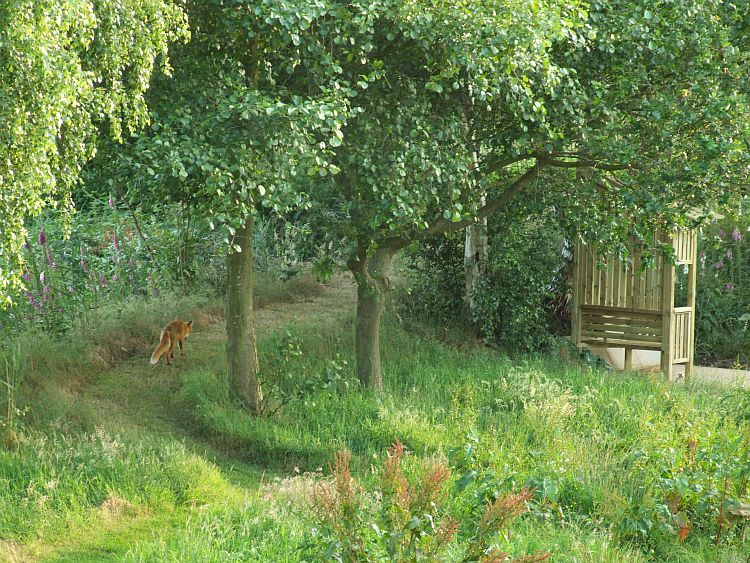 And that, we thought, would be the last we would see of it. However, twenty minutes later the fox is back. Once more I dash upstairs, to where I'd left my camera, not having expected any more excitement. This time I'm bold enough to fling the window wide open. The noise makes the fox stare up at me. 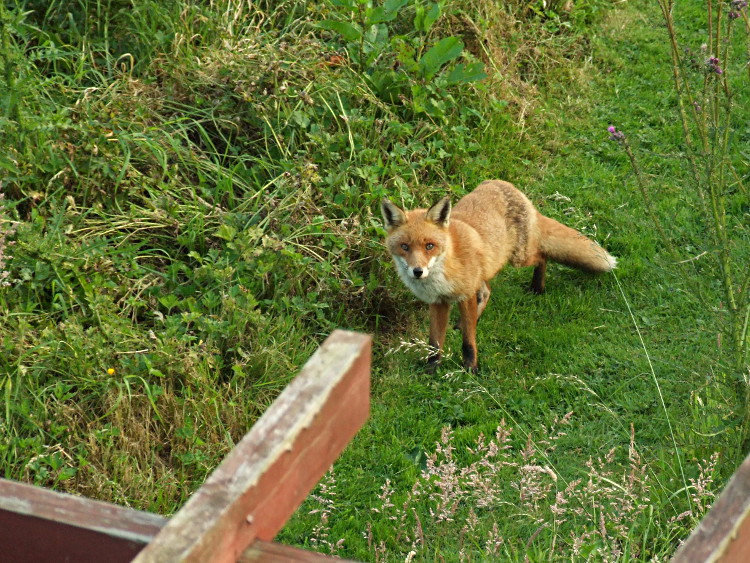 Still he's in no rush. It's another twenty seconds before he turns and begins to walk away again. He's clearly seen that there's no easy way past the side of the house as there's a six foot fence to climb. Besides there's clear things of interest on the way as, once again, he stops to stare at something in the long grass. 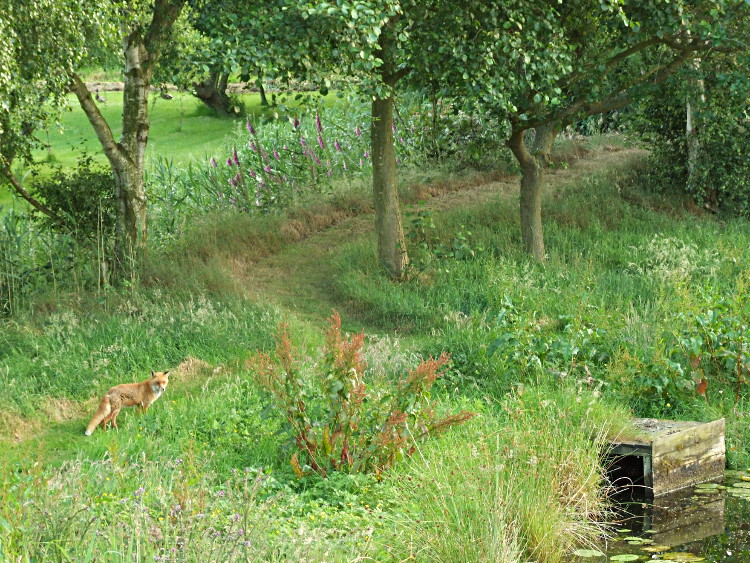 It's another three minutes before it's got as far as the arbour. This time he takes the low road and spend some time examining the undergrowth in amongst the foxgloves! At one stage he pounces on something, but clear it gets away as there is no further attempt to capture anything. 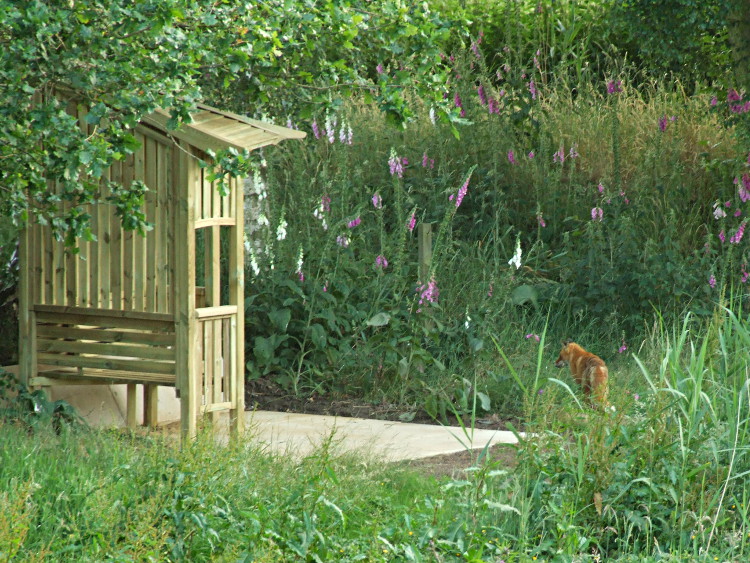 The fox then continues its slow journey further down the path, again spending some time staring into the undergrowth just beyond the bridge to the island.

I guess the animal found his way to us across the main dyke to the west of us. That would have meant a bit of a swim in the foulest of green algae covered water. It didn't occur to me till afterwards that would suggest that he had been around for some time as his fur looked beautifully groomed and completely dry. It also gives credence to the idea that A Fox Destroyed The Eggs on the goose nest on the small island at the back of the lake. 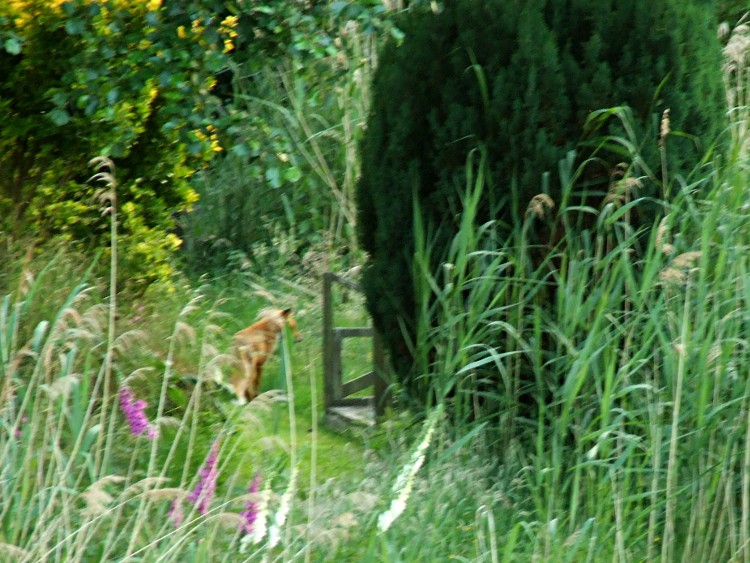 And that wasn't the last we saw of him. He returned to the house a third time, but by this stage the light was fading fast and the pictures I have of this visit are blurry as my camera waved about and the exposure times were too long him.

He left this last time by the high road. My last picture was taken at 20:48, within a minute, a full hour after the first I took of him.