Christmas day and shortly after 14:00 it's time to get a breath of fresh air - and record what "The Green Team" have achieved so far! I start my tour passing behind the cottages. 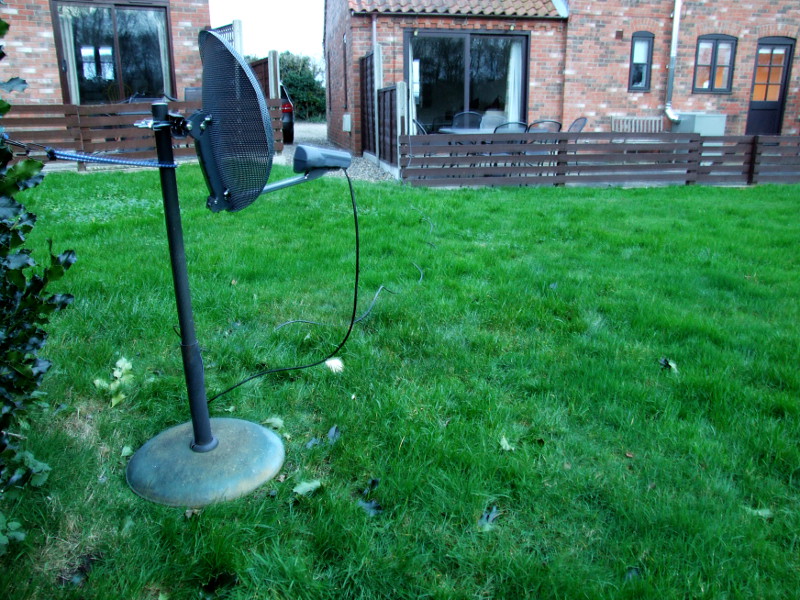 The satellite Dish which, photographed a couple of days ago, was still there, outside one of the cottages. I still find myself asking who spends money to get away from home yet still can't live without what they have at home. Why get away from it all in the first place? The comment of Sid Kipper, the Norfolk comedian, comes to mind. "Motorway? What do we want one of those for? Aren't we already where we want to be"? It sums up so much of the Norfolk approach to modern life so well!

Just beyond the satellite-equipped cottage I find the group of visiting geese that have been here for the last few weeks. I say "visiting" as I'm not yet convinced they will reduce to a resident pair by nesting time. I suspect they'll move on before then. 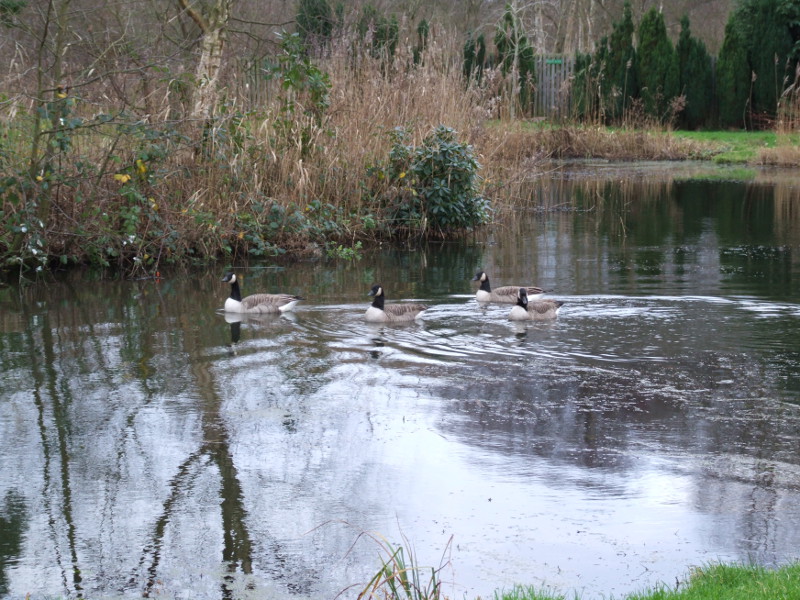 As I approach they take to the water. That definitely makes them newcomers. When more used to the area they'd stay on land and allow you to walk within a few feet of them. Just behind the geese on the edge of the island is one of two rhododendron bushes on the site. My friend Tim always mutters words like "invasive" and "non-native" when the subject of rhododendrons comes up. In the background you can just make out, between the conifers, the gate with the sign "Private" through which I'll shortly be passing. 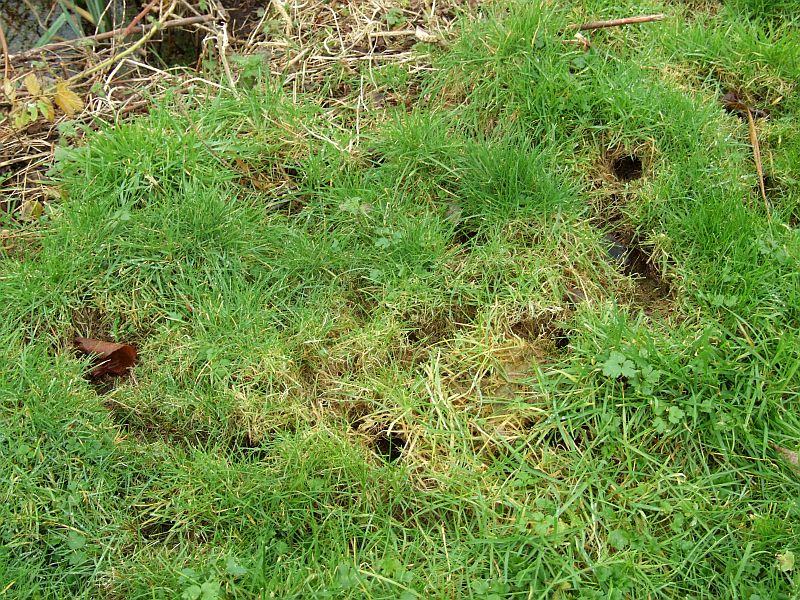 However, I'm more interested in the area deserted by the geese as a couple of days ago I noticed that voles had begun to take over this area as well and I wanted a photograph to record the site. I'd first noticed them behind the house in spring. Their burrows slowly expanded from the house almost half way to the bridge to the island. Now they were to be found behind the cottages as well. 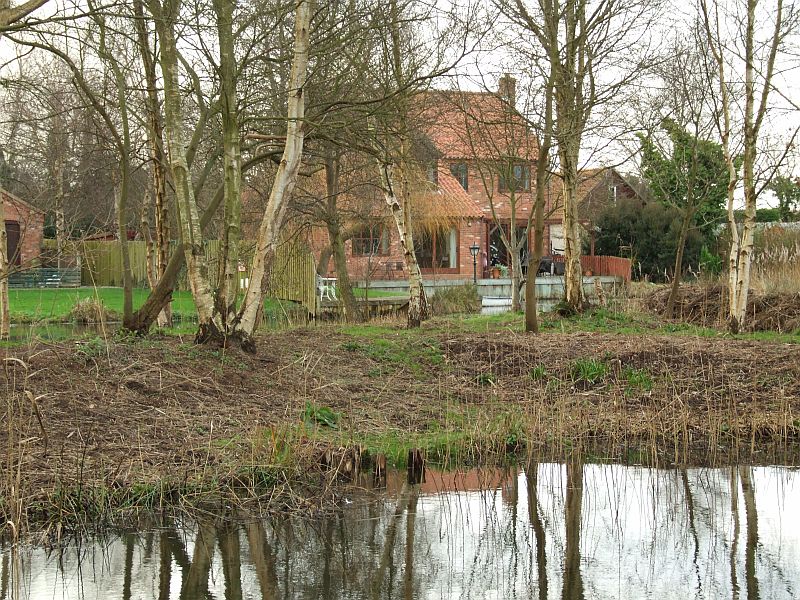 Moving round the grounds of the cottages I made my way towards the tip the peninsula that wraps round the back of the island. Now it is possible to see Ruston House, "The Green Team". having cleared virtually all of the nettle and bramble that once would have been seen from here. They've also begun removal of the fishing stands on the island, the uprights are all that remains of the one in this photo. 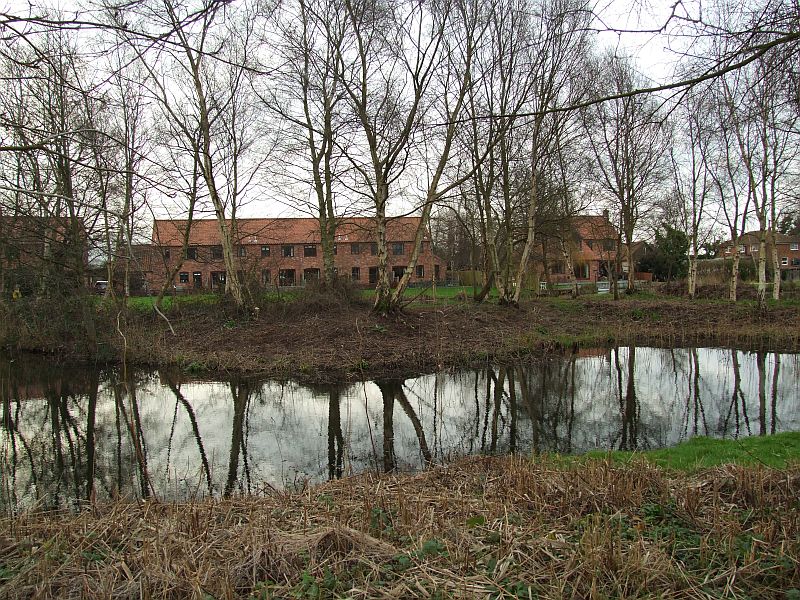 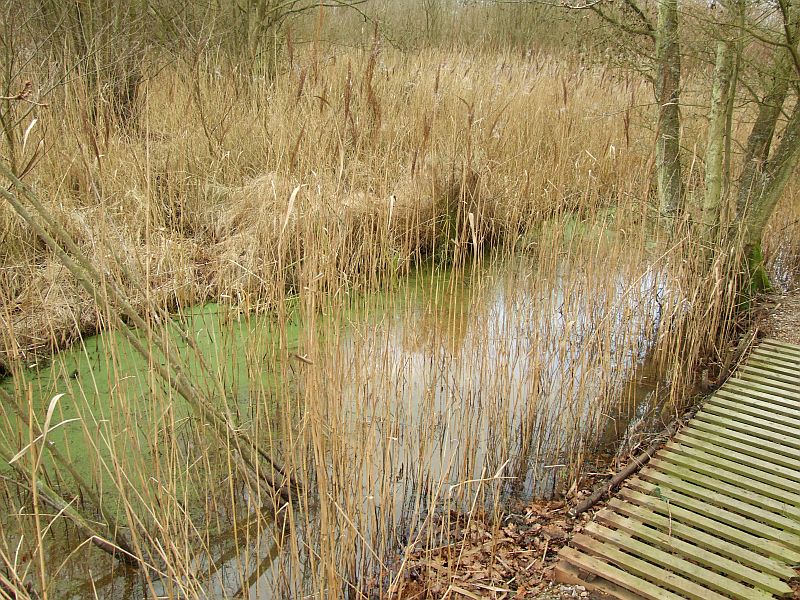 Moving back to the root of the peninsula I pass through the gate, mentioned earlier, and make my way to the path created earlier in the year that follows the dyke that forms the boundary of the property. This is severely overgrown and choked with reed and dead fallen trees. In the last month some redundant fencing has been laid as down to act as board walk as the bank of the dyke is quite low and can get waterlogged at this time of year.

While it's not easy to make out in this photograph, I'm pretty sure that you can see the point where deer enter the water on the far side of the dyke to cross to our side. It is about a third of the way along from the left of the picture. 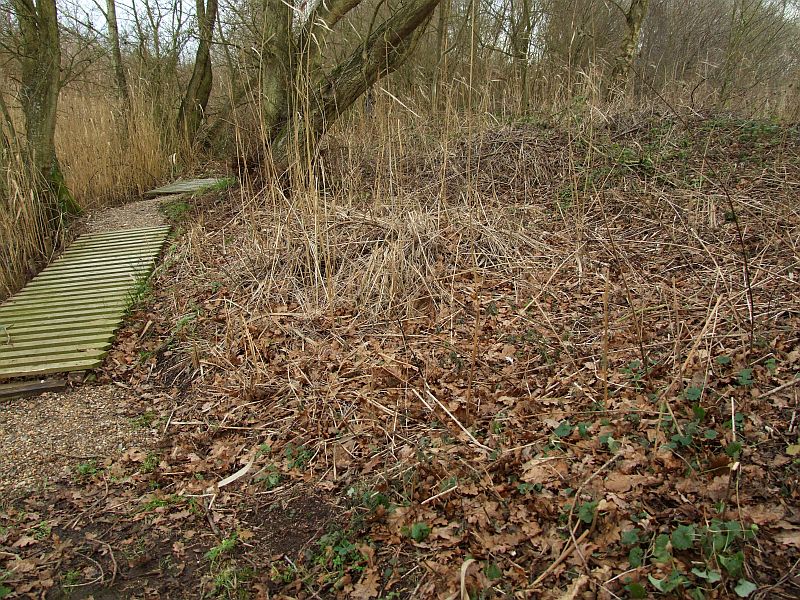 Equally difficult to make out in this next photo is the semi-circular route they take having crossed, to by-pass the first run board walk. The route was easier to see when the tall reeds in the centre of the picture were a little more dense. Then you could see how the deer walked round both the fence panel and reed, while not climbing the embankment beyond. 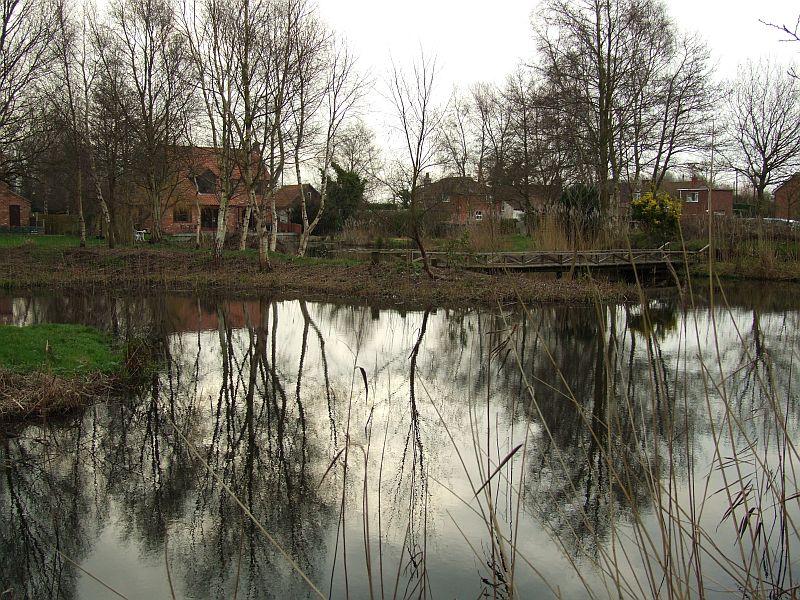 My next stopping place is on one of the remaining fishing stands. It is level with the tip of the peninsula and just visible in this photograph. This is the area of the lake we call "The Pool". For the moment, at least, the holidaymakers who choose to fish from the end of the peninsula can see the bridge to the island. This is normally hidden by the vegetation on the island.

Diana and I announced our wedding to family members today, and we now have plans to build a gazebo on the island to take advantage of the view towards the area where I am standing to take this photograph. We don't need any more coffee makers or toasters, so we hope that those who do insist on buying a present to celebrate the wedding will offer contributions towards its cost. "The Green Team" have said their present will be pyrographically engraved wooden plaques with the messages our well wishers send which we plan to erect in the structure, once it is built. 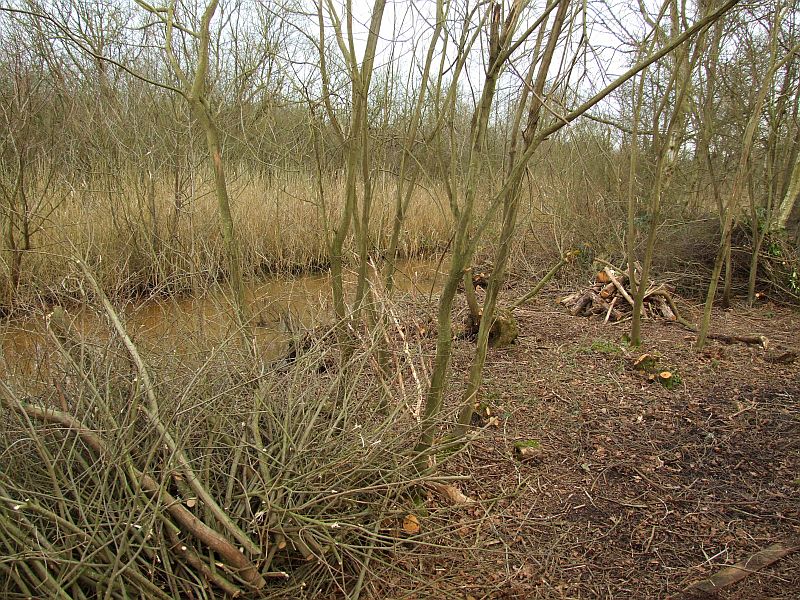 Moving on again I come to the area behind the reed bed in the south western corner of the site. Since the Green Team have arrived this has been completely opened out. It was a mass of vegetation, mainly nettle and bramble with a lot of "crack willow" growing through. As you expect with this plant, much of it had split, fallen and re-grown.

The ground here is often waterlogged after heavy rain and part of the plan for this area has been to use the timber salvaged from the fishing stands to create crude quay heading to reinforce the bank, raising it slightly, and hopefully, eventually to the point where it will only flood in the most extreme cases. 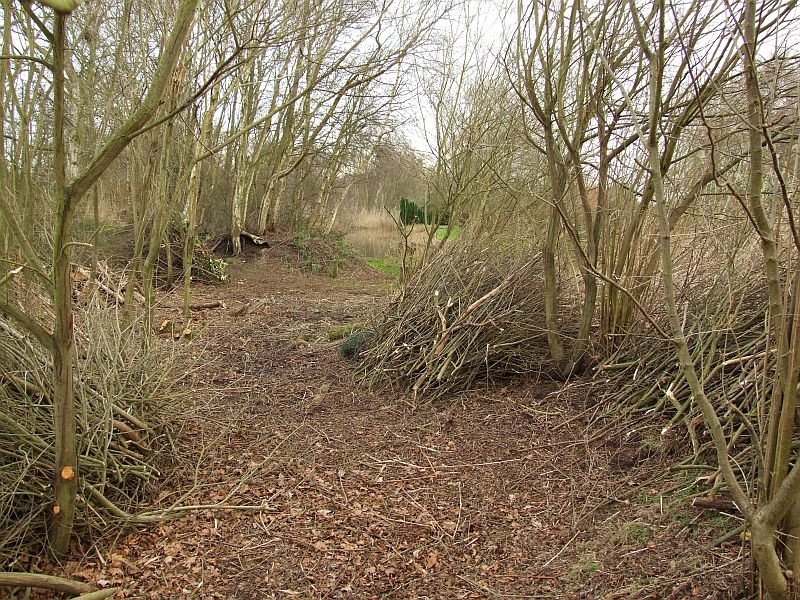 Moving back a little from the previous picture and swinging the camera to the right I am now standing close to the south-western tip of the plot. You can see down the length of the peninsula as far as the conifers seen in the background of the of the picture of the geese in the lake. Here you can see how the Green Team have stacked the brash remaining from the felled trees and cleared ground. 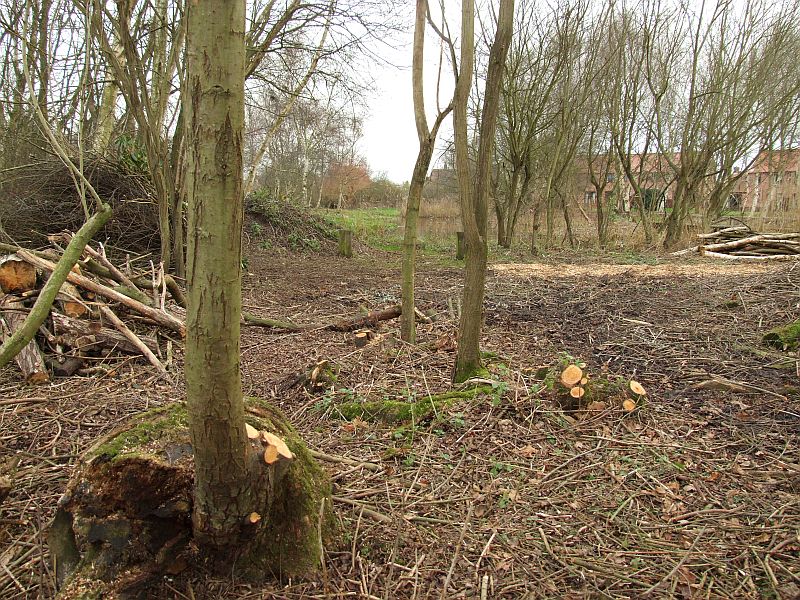 Moving forward and to the dyke bank, seen in the first of these last three photographs, we can see pile of timber felled in this part of the site and the cottages in the background. In the middle distance is a strip of chippings, left over from the path near the house, spread here to help dry the heavily trodden path round the lake where it turns the corner at the back of the site. Just beyond the path is a stack of logs set. These have been set aside as potential path edging for a planned new path to run around edge of the island.

As you might imagine, this Christmas has been a really exciting time for Diana and I. There's a wedding to arrange for September and plans for the grounds at Ruston House coming together nicely. The only major outstanding issue is to agree a plan for lake management with the cottage owners. 2015 could be a good year!